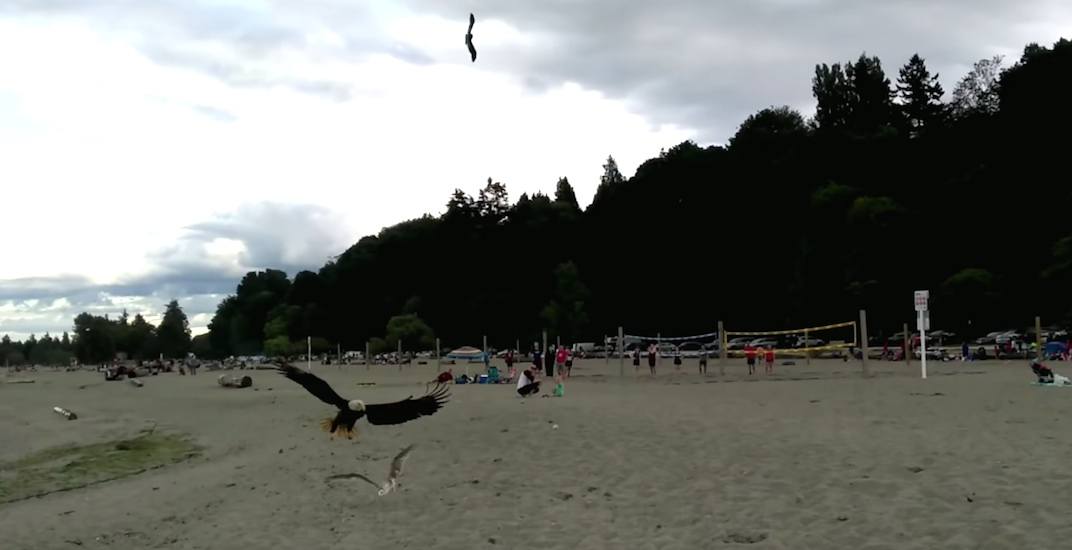 A bird fight involving crows, a seagull, and a bald eagle at Spanish Banks in Vancouver on July 1, 2018. (Luke McAdam / YouTube screenshot)

Have you ever seen a bird fight involving three different species of bird?

On Sunday, a small murder of crows were spotted attacking a bald eagle at Vancouver’s Spanish Banks Beach.

However, it appears the apex predator was the instigator in the low-aerial commotion over the beach, as it was in the process of hunting a juvenile seagull.

The swarm of birds flew within very close proximity to some beach goers, including Luke McAdam, who uploaded video footage of the fight to YouTube.

At one point, the eagle’s talons caught the seagull mid-air, but the smaller bird was able to break free from the lethal grip.

Bald eagles have become highly adaptable to Metro Vancouver’s urban environment. Over the last few decades, their local populations rebounded after they transitioned from being a fish-eating species to one that primarily hunts other birds, including crows, ducks, pigeons and seagulls. Some have also chosen to scavenge along the seashore or even in landfills.

The birds can grow up to a size of three feet in length, with wingspans of eight feet, and can have lifespans reaching over 30 years. They are capable of breeding when they turn five years old.

In Vancouver, their nests are commonly found in Pacific Spirit Park, Stanley Park, Kitsilano, and Jericho Beach Park, although they also do not mind nesting in public and noisy areas such as parking lots, rooftops or even industrial sites. Both parents share the duties of hunting and feeding for their young, which are raised throughout the spring and summer months.