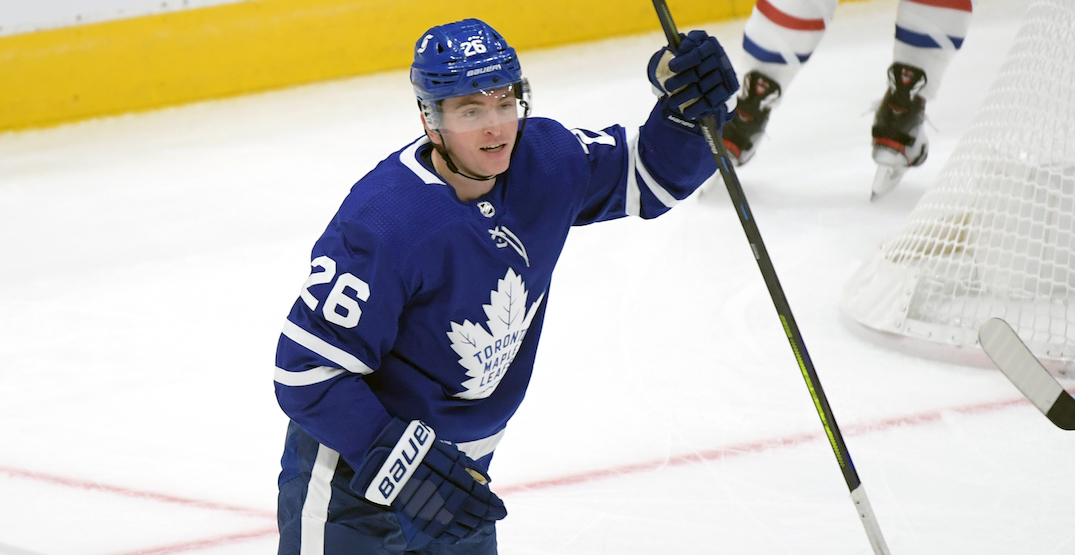 On a Wednesday morning in Vancouver, news broke just after 9 am of the latest Canucks transaction. What’s the opposite of a blockbuster move? Would a ‘Netflix move’ be too corny?

Officially claiming Jimmy Vesey off waivers after the Toronto Maple Leafs placed him there yesterday, the Canucks, acquired, uh, definitely a guy who can play hockey.

With a cap hit of just $900,000 and a contract that expires this summer, the 27-year-old left winger is making the five-hour drive from Toronto to Ottawa, with the intention of playing in the Canucks lineup tonight.

Here’s everything you need to know about the newest member of the Canucks.

Vesey is a player that definitely belongs in the NHL. Where, exactly, is anyone’s guess.

He’s put up between 20 and 35 points in each of his four seasons, and hit goal totals of 16, 17, and 17 in each of his first three years in the league, before a nine-goal, 11 assist campaign in Buffalo last year. Everyone is allowed a mulligan with their Buffalo stats though, right?

With the Leafs this season, the six-foot-three, 202-pound winger rotated between each of the second, third, and fourth lines, starting off with a big game-tying goal on opening night. Despite his imposing size, Vesey doesn’t play overly physical, ranking ninth on Toronto this season with 23 hits.

It’s honestly hard to find a better moment for Vesey’s brief Leafs career than opening night, although scoring the first two goals against Edmonton in a 6-1 rout earlier this month might give that debut a run for its money.

He also finished off this nice passing play to score against the Canucks 11 days ago.

With each centre, Vesey put up a Corsi-for percentage of under 50% each time, with his 45.6% percentage on the year being the lowest of any Leafs forward who’s suited up at least 25 times this year.

While Vesey’s defensive struggles at even strength have hurt his ability to stick around with one team, he has also played on the PK each of the last three seasons, with decent but not spectacular results. He’s played just eight minutes on the power play this season, and is yet to register a point with the man advantage.

Long story short: he’s not winning any Selke Awards any time soon, but will kill the occasional penalty.

And yet? He might actually be an upgrade for much of the Canucks’ bottom-six.

Vesey has as many goals this season as Nils Hoglander and Tyler Motte (5) respectively, and has outscored the likes of Adam Gaudette (3), Jake Virtanen (3), Jay Beagle (1), Antoine Roussel (1), Zack McEwen (1) and, yes, Loui Eriksson (1).

Vesey isn’t going to fix any major problems for Vancouver, but he might just ease the pain with a goal every two weeks or so. Hey, maybe he gets a shot on Bo Horvat’s wing and rides a shooting streak bender and Vesey jerseys start flying off the shelves. I wouldn’t count on it, but, stranger things have happened.

The winner of the Hobey Baker Award in his senior year at Harvard in 2016, Vesey beat out Thatcher Demko and Kyle Connor for the prize of college hockey’s top player. Ask 100 people to take your pick of  which of those three you’d want signed on your roster today, and you’ll get 0 votes for Vesey.

Vesey’s summer in 2016 was a wild one, as he elected to not sign with the Nashville Predators, who had drafted him four years prior, after leaving college. The Buffalo Sabres traded a third-round pick for his rights despite the fact that he had no obligation to sign a contract with them and could test free agency, which is exactly what he did.

But it became a mad dash to see who would land the top college free agent of the year in Vesey, with the New York Rangers ultimately inking him to a deal on August 19. Six other teams scheduled meetings with Vesey, while five more were denied requests.

If you know anyone who was active on Hockey Twitter at that time, it was legitimately an experience and a sweepstakes like no other, with many fans convinced whichever team landed him was getting a guy who could slot into the NHL and become a star.

You might’ve gathered that never happened, judging by the fact his career-high in points is 35.

After three years in New York, Vesey did actually end up in Buffalo last year as a free agent on a one-year deal, eventually electing to leave the city after a single season.

In his career, he’s totalled 334 NHL games, with a stat-line of 64 goals and 53 assists. Fine, but nothing special at all.

Vesey will hang around Vancouver for a bit, likely until the end of the season. He might re-sign short term, maybe even for a couple years depending on who’s in charge when that conversation comes.

As long as you don’t set your expectations too high, Vesey will probably produce about exactly what you’re asking of him.