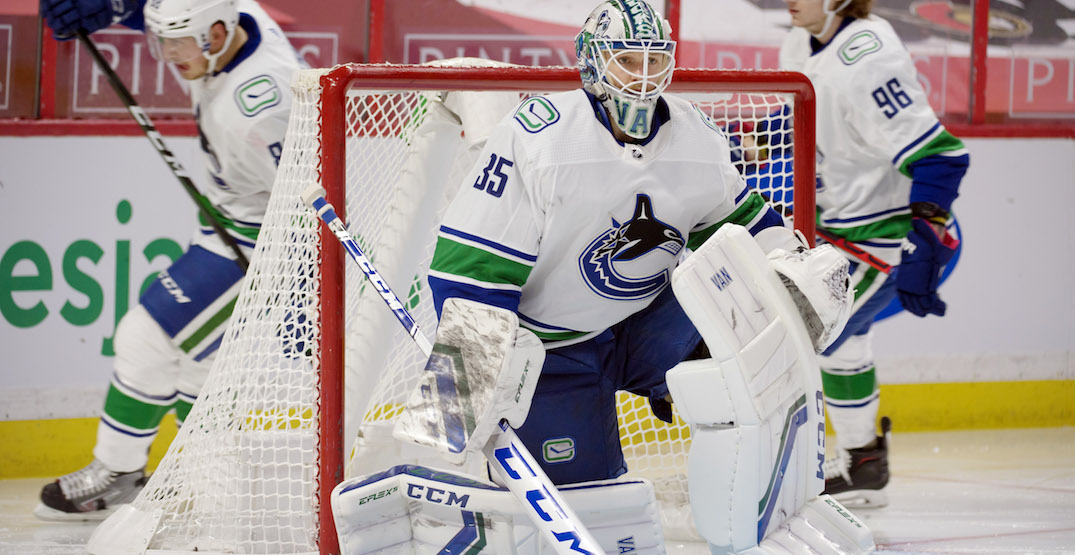 Technically, the Vancouver Canucks are the hottest team in the North Division so far this month.

I say “technically” because they actually haven’t played very well, despite picking up wins.

But they’re not winning these games with smoke and mirrors. No, they’re winning them because of Thatcher Demko.

That was true again on Monday, as the Canucks won despite being outplayed and outshot 46-28 by the Ottawa Senators.

Vancouver has been outshot in every game this month, by an average of 36.6 to 27.5. The Canucks don’t have to apologize for getting great goaltending, though if they hope to make the playoffs, they’ll need the rest of the team to pick up the pace. But for now, Demko is keeping them alive.

The Canucks are riding their new No. 1 goalie, starting the 25-year-old in nine of the team’s last 10 games. Demko’s numbers are on the rise, with a save percentage now sitting at .920.

Demko ranks fifth in save percentage among goalies with 15+ starts (NHL.com)

If the season ended today, you could make a strong case for Demko to be nominated for the Vezina Trophy, which is truly remarkable given the uncertainty regarding his game coming into this season. Demko was sensational during his short playoff run last summer, but he only had 34 career regular season starts before this year — a number he’s likely to double this season.

“I want to keep growing, I want to keep getting better,” Demko said after Monday’s win in Ottawa. “Luckily I’ve been getting an opportunity to play here a few games in a row… I’m just trying to do my part. Just trying to keep it rolling and keep the wins coming.”

Now the net quite clearly belongs to Demko, who agreed he’s as dialled in as he’s ever been right now.

Demko now ranks fifth in the NHL in save percentage among goalies with at least 15 starts, and deserves extra Vezina consideration given the difficulty of his workload.

With 21 starts under his belt, this is no longer just a hot streak for the San Diego native — though he has been red hot in March — posting a league-best .953 SV% this month.

Demko now ranks third in the league in goals saved above expected (11.26) this season, ranking behind two goalies that play on Stanley Cup contending teams: Andrei Vasilevskiy and Marc-Andre Fleury.

Demko will need to keep up his strong play for a chance to get nominated for the Vezina, and if somehow he can drag the Canucks into the playoffs, his case will be impossible to ignore.