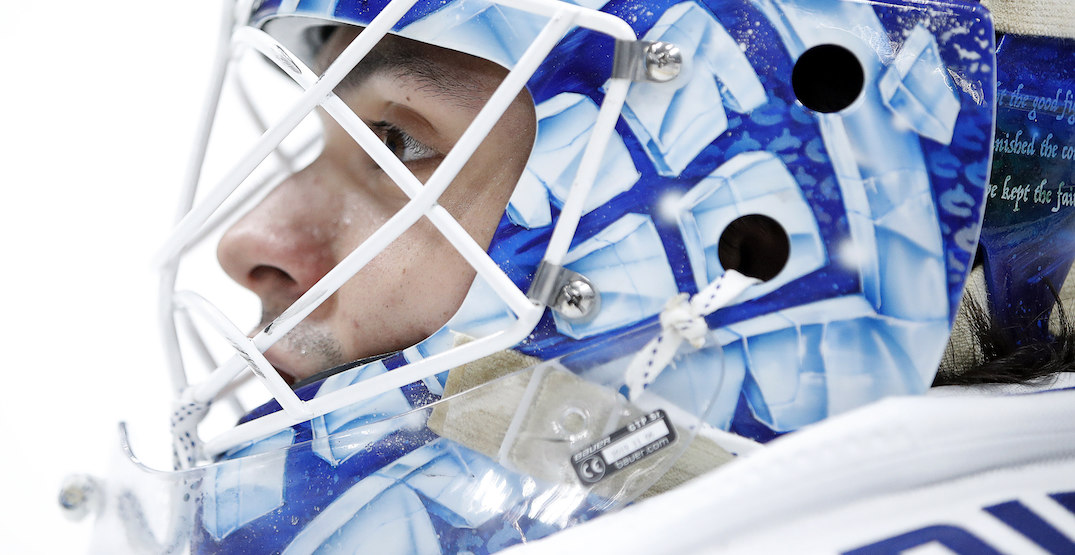 Sports fans will forever remember the night of March 11, 2020.

That’s the night that Rudy Gobert tested positive for COVID-19, resulting in the Utah Jazz team doctor racing to centre court to let the officials know. The game was subsequently cancelled, and shortly after in an unprecedented move the NBA suspended its season.

I bet Michael DiPietro remembers that night well too, as it was also the last time the Vancouver Canucks goalie prospect played a competitive hockey game.

It’s been 370 days since DiPietro last strapped on the pads for meaningful game, as he’s become a victim of unusual circumstances.

While some Canucks prospects, like Kole Lind and Jack Rathbone, are getting games with the Utica Comets this season — DiPietro has not. Instead, the 21-year-old prospect has spent the first two months of the season on the Canucks taxi squad, meaning he gets to practice but not play.

The issue is that the Canucks are one of just three Canadian NHL teams (Calgary and Edmonton are the others) that have their AHL affiliate located in the United States. The Flames bucked up and moved their AHL team from Stockton, California to Calgary for the season, but the Canucks and Oilers chose not to.

The Canucks can recall players from Utica, but not without having them go through a 14-day quarantine upon entry into Canada.

The Canucks have brokered deals with other Canadian teams to be able to send some prospects to AHL teams in Manitoba (Winnipeg Jets) and Laval (Montreal Canadiens) in order to avoid them having leave the country, but so far that doesn’t appear to be an option for their star goalie prospect.

So DiPietro, who is the third-best goalie in the organization, is being kept around Vancouver as insurance.

“It’s hard. We’ve talked about it. We’re going to continue to explore what that would look like to get him some games,” Jim Benning acknowledged on March 5. “He needs to play, I understand that. But in the meantime, he’s practicing every day, he’s working with Ian Clark, I think there’s some benefits to that too. But at some point here we’ve got to figure out how to get him some games.”

Eleven days have passed since Benning made those comments, and yet DiPietro is still in limbo.

This could be potentially very damaging to DiPietro, who was enjoying a fine rookie season in the AHL when the pandemic hit. The Windsor, Ontario native had a 21-11-2 record with a .908 save percentage in 36 games with the Comets — slightly better numbers than Thatcher Demko posted during his first AHL season in 2016-17.

It was in Demko’s second season where he really solidified himself as the Canucks’ goaltender of the future, posting a .922 save percentage and going 25-13-4 in 46 games. Unless something changes soon, DiPietro won’t be afforded the same opportunity.

DiPietro has excelled at every level he’s played at. He was a Memorial Cup champion before the Canucks drafted him in the third round in 2017, and was named OHL Goaltender of the Year in 2018. The season after that, DiPietro starred for Canada at the World Juniors, being named one of the top three players on the team.

The Canucks could also try to add another goalie to their system, perhaps a veteran netminder more capable than Kielly who could fulfill the taxi squad role.

The Winnipeg Jets put Anton Forsberg on waivers today. The Canucks could claim him, but the Swedish netminder would need to clear waivers again if Vancouver wanted to stash him on their taxi squad. Alternatively, the Canucks could claim Forsberg, keep him on their 23-man roster, and shuttle other players up and down from the taxi squad when needed.

Whatever decision they make, it needs to result in DiPietro playing games, because the current situation isn’t helping anybody.