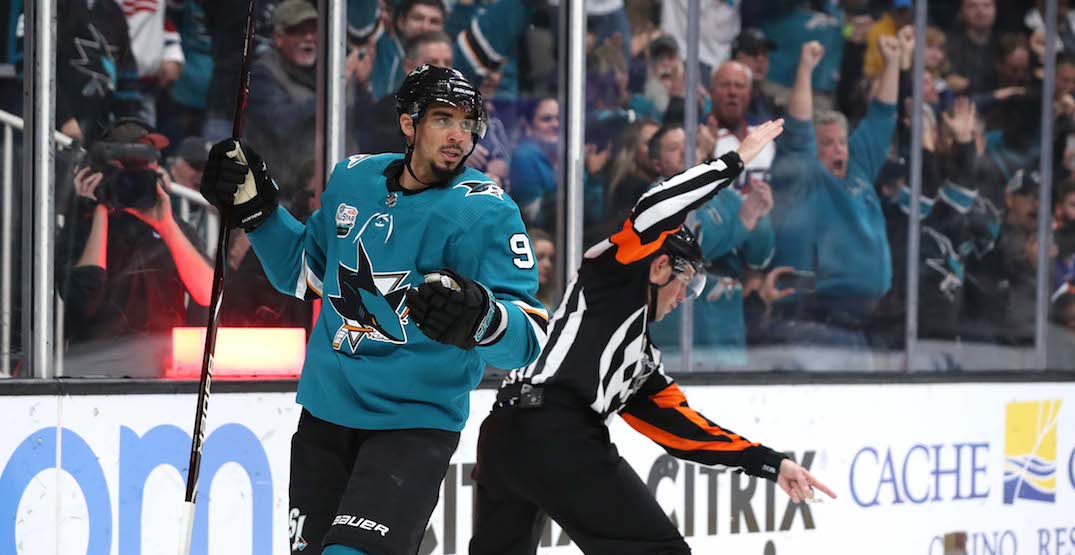 It looks like Evander Kane is headed to Edmonton.

The news broke from an unlikely source, as former NHL referee Tim Peel appears to have the inside scoop.

“I’m hearing Evander Kane will be signing in the next few hours. Destination: Edmonton Oilers,” Peel said in a Tuesday afternoon tweet.

The report has since been confirmed by Irfaan Gaffar of The Fourth Period.

Tim is not wrong. https://t.co/vJugqo6fOZ

Oilers GM Ken Holland said earlier today in a press conference that he had spoken to Kane’s agent, Dan Milstein.

Kane became an unrestricted free agent after the San Jose Sharks terminated his contract. Though he’s a power forward that has the ability to score 30 goals, Kane comes with a risk given his off-ice trouble seems to follow him.

“I believe in second chances,” Holland said this morning. “It’s hard to be perfect. We’re all people. We all make mistakes. Some make big mistakes. Some make little mistakes. But it’s hard to be perfect. I think if somebody makes a decision or does something in their life and makes a mistake, I think they have to try to learn from it and try to change and should be entitled to a second opportunity once they do some of those things.”

In October, the 30-year-old Vancouver native was suspended for 21 games after he reportedly tried to use a fake vaccine card before reporting to San Jose for training camp.

Kane was reportedly already not welcome back by many of his Sharks teammates this season, stemming from “disrespect for team rules,” like being late for practices and games last season, Kevin Kurz of The Athletic reported last summer.

This followed numerous allegations from Kane’s estranged wife, which she made public on multiple occasions.

When Kane’s suspension ended, the Sharks sent him to the minors. It was while with San Jose’s AHL affiliate that Kane had his contract terminated for “breach of his NHL Standard Player Contract and for violation of the AHL COVID-19 protocols.”

The Sharks contend that Kane travelled home to Vancouver while COVID positive, according to another report from Kurz. The NHLPA has filed a grievance on Kane’s behalf.

This is a calculated gamble by the Oilers, who have lost five games in a row and 11 of their last 13 games. Edmonton can’t afford to take a step back this season with Connor McDavid and Leon Draisaitl in the prime of their respective careers.