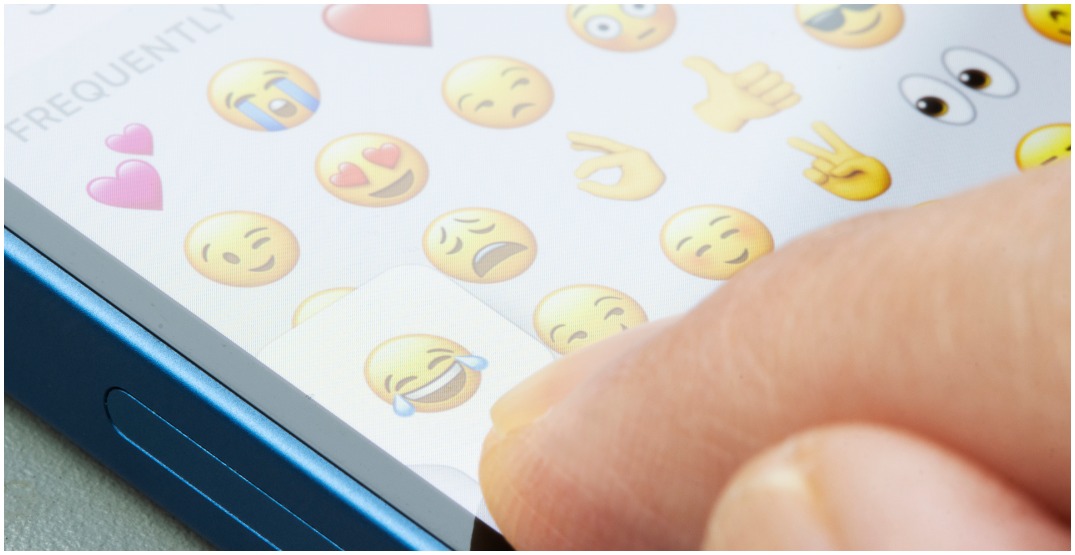 Canadians love to laugh, judging by the emoji they use the most.

The “face with tears of joy” emoji — which you might know as the “crying laughing” face — is officially the most used emoji in Canada, a new study that analyzed 9 million geotagged tweets found in February 2022.

Clearly, the emoji isn’t totally cancelled for being uncool, despite debate online about its trendiness, as reported by CNN.

The company that conducted the study, Crossword-Solver, also listed nine more top emojis across the country.

“More than a punctuation mark and parallel to written language, a well-chosen emoji packs a punch as a gesture – enriching written communication and lending it some of the tone and nuance that is lost from face-to-face or phone conversation,” it said on its website.

It looked at how many times each emoji was used per 10,000 tweets to put together its final ranking.

“Canada is a country filled with laughter and love — or at least that’s what we can tell from its most used emojis,” says a graphic from the study.

Our top emoji is actually very popular in other parts of the world, too. 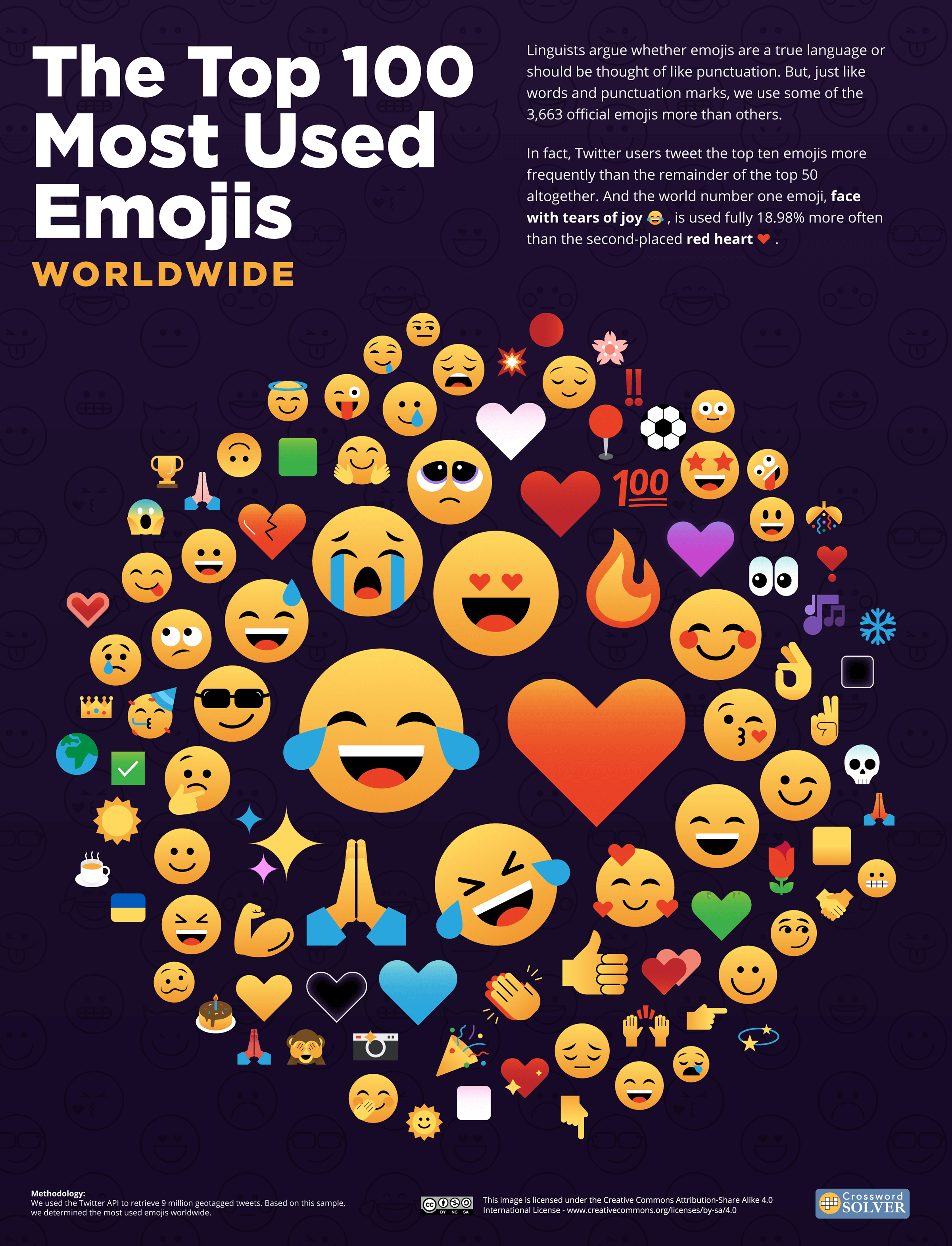 “Most countries are either laughing or loving as face with tears of joy 😂 and red heart ❤️ are the first and second most used emojis worldwide,” said Crossword-Solver.

“Face with tears of joy 😂 is the most common emoji in 75 countries.”

It has been deemed the most-used emoji on Facebook and Instagram, used to indicate both uncontrollable laughter and self-deprecating humour.

To boot, it was “the giant of international emoji use,” and was used 18.98% more than the red heart — which came in second — worldwide.

After the red heart came the rolling on the floor laughing face, which is basically just the crying-laughing face on an angle and with slightly more squinted eyes. 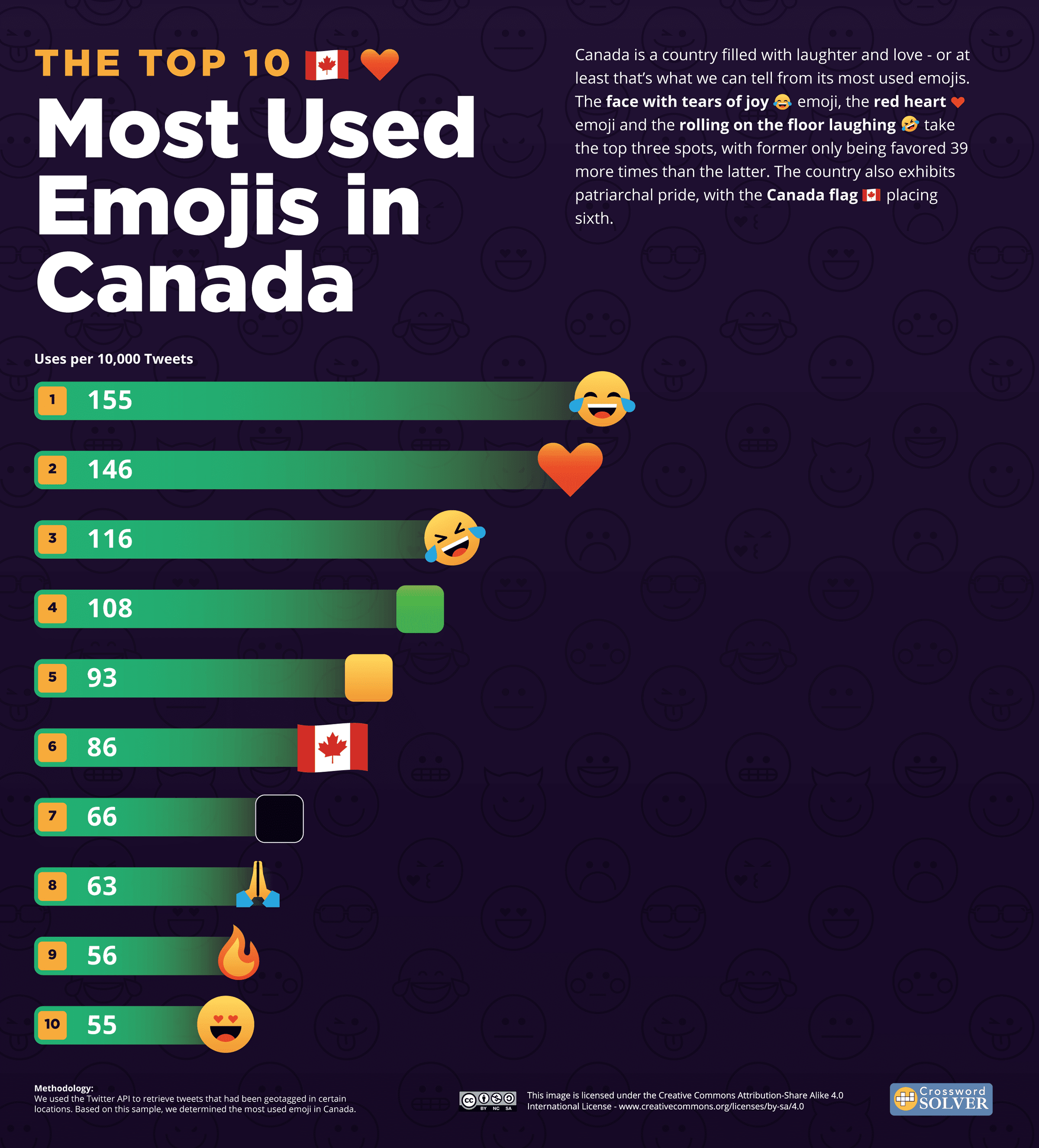 Interestingly, two solid-colour boxes came next, with a green square in fourth and a yellow square in fifth. Wordle is probably to thank for that one, Crossword-Solver confirmed in an email to Daily Hive Vancouver.

“It turns out, that Canadians are great at the game and post their scores a lot!” said a representative.

At long last, and in true nationalistic fashion, the Canadian flag emoji got a spot as the sixth most used on the list.

The black square came next, in seventh, followed by the praying hands, the open flame, and the heart-eyes face.

All in all, pretty positive responses for Canada! The survey findings really reflect our polite and positive nature, eh?