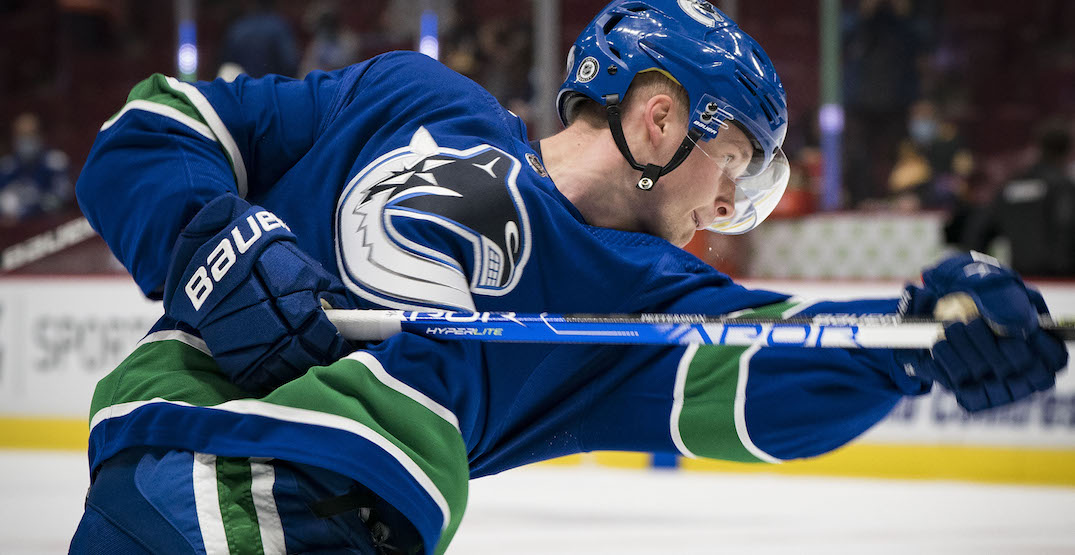 At this time last year, the NHL was in its offseason, but Elias Pettersson was everywhere.

The Canucks star, fresh off an impressive 18 points in 17 games in the Edmonton playoff bubble, decided to spend the offseason in Vancouver. He posted photos of himself modelling clothes and videos of himself in goalie gear, and he engaged with fans by streaming on Twitch.

Canucks fans ate it up.

The problem? Pettersson didn’t have a great start to last season, and neither did the Canucks. All of a sudden, inevitable whispers began getting louder, wondering if he was spending too much time building his brand.

It was probably unfair to Pettersson, who is well known for his dedication to the game and his desire to win. But in a sport like hockey, where athletes are often guarded when showing off their personality, it can become a talking point.

In an interview this morning with Mike Halford and Jason Brough on Sportsnet 650, Pettersson did admit that social media took up too much of his time last year.

“I was doing a lot [on social media] before last season. I put a lot of effort in it, a lot of time,” said Pettersson. “I think it was a little too much focus on that, and not focused on the right thing… When I want to post something [now], I’ll post something… and if a brand comes up and wants to do a deal, then I might want to do a deal with them… I’m just focusing on hockey and then social media comes after.”

Today on Halford and Brough, Elias Pettersson was candid about his focus on social media earlier in his career, and how now he has put all his attention on hockey.🔊@MikeHalford604 | @SadClubCommish pic.twitter.com/8euDg4O9UP

Pettersson did have a quiet summer in Sweden on social media, following an injury-shortened season. Last season was widely viewed as a disappointment for the 22-year-old, who has high standards for himself — though he did score 21 points in 26 games.

Pettersson said he used to pay attention to what was said about him in the media and on social media — both positive and negative — but last season changed that.

The Canucks had a 9-15-2 record when Pettersson played his last game before his season-ending injury suffered on March 2. He admitted to reading some of the negative reviews.

“I was [paying attention to what was said about me], but then when I had a bad start last year, and then I read some article, and never again. So no, I don’t read that stuff,” Pettersson told Halford and Brough.

“I’m not focusing on that. I know what I’m capable of. I just want to do my best for the guys in the locker room to help this team win games… Even though I appreciate the outside noise, I don’t focus on it.”

While Pettersson has shifted his focus away from social media, his play on the ice still isn’t at the level that he or fans expect. He has just three points in six games, with two of them coming on the power play. More than that, he simply hasn’t looked like himself on most nights. Given the way his first two NHL seasons went, where everything he touched seemingly turned to gold, it’s noticeable.

Pettersson did join the team late while he and Hughes were getting their contracts finalized, so that could be affecting his timing. He also referenced an injury in training camp.

Asked if he was maybe just a bit rusty, Pettersson said: “Maybe. I was injured in training camp. Maybe, I don’t know.”

Slumps to start the season get magnified more than in mid-season, and three points in six games shouldn’t necessarily ring alarm bells.

But with every passing game that the slump continues, particularly in the upcoming seven-game homestand, the pressure will mount.

“It’s a lot of pressure, but nothing new to me,” said Pettersson. “I appreciate that fans think so highly of me. I gotta show it. I haven’t played the way I want to play.”