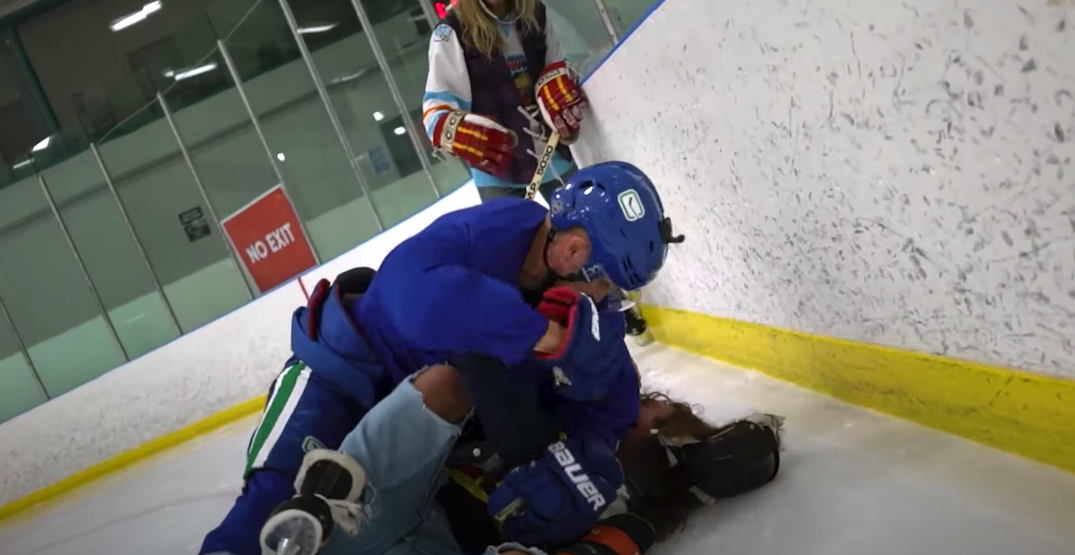 After the Canucks’ season ended in early September, Pettersson chose not to return to Sweden, instead opting to spend the fall in Vancouver. That gave the ultra-Canadian hockey video-makers the opportunity to step onto the ice with Pettersson at Scotia Barn, the ice rink complex formerly known as Burnaby 8-Rinks.

On The Bench has been teasing the video for weeks, with photos of the 21-year-old forward in goaltending gear. Olly and Jacob, the alter egos of Steven Campbell and Ryan Russell, told Daily Hive they drove 12 hours from Alberta to Vancouver to film the Canucks star.

Pettersson straps on the goalie pads midway through the 22-minute video and appeared to have the technique dialled in.

“A lot harder than I thought,” Pettersson said at the end of the video in the dressing room. “It’s been like two-three years since I last played in net. It was fun. I had a great time.”

“We were, of course, concerned because our shots could potentially kill him or end his career,” Olly and Jacob said, as only they can, in an email to Daily Hive last week. “Still, he insisted on suiting up, so we let him. We had no idea the skill this kid had in net — we were actually amazed — from the big glove saves to the post-to-post slides where he made unreal pad saves we were pretty shocked at his tendy repertoire.”

The first half of the video has Olly and Jacob giving Pettersson pointers on things like where he should place his hands while taking a slap shot. But the video really gets good when they start making Pettersson angry — all for show, of course.

“Since Petey isn’t a very big player, we’re going to teach him how to throw the meat around, and toughen him up for next season,” Jacob says in the video, before Pettersson beats up Olly for the first time. He later threw a big bodycheck on Jacob.

Pettersson doesn’t say much in the video until the 11-minute mark, when he finally blurts out: “Alright guys. Hey, listen. You guys suck. You haven’t teached me anything.”