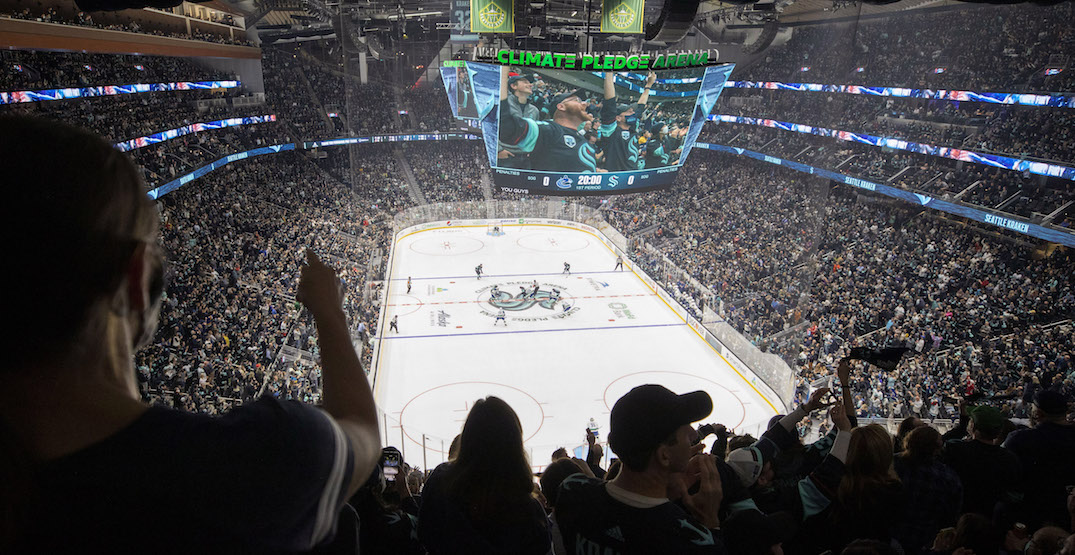 The new $1.15 billion home of the Seattle Kraken hosted its first-ever NHL game on Saturday against the Vancouver Canucks, in front of a sold-out crowd of 17,100 people. I was in attendance, covering the game from the media box for Daily Hive, and was blown away by a number of things.

Not many fans from north of the border were in attendance due to the still-closed land border for non-essential travel. The border will open to fully vaccinated Canadians on November 8, so expect more Canucks fans in attendance when their team visits the Emerald City on January 1.

Until then, here’s what you can expect to see.

Climate Pledge Arena has been described as a “renovated” stadium by some, but that’s misleading. It’s a brand new arena top to bottom, with the exception of the roof.

Built on the old site of KeyArena, the former home of the Seattle Supersonics, the roof was maintained. From an outsider’s point of view, it’s a bizarre decision because the roof isn’t particularly beautiful. The arena was first built for the 1962 World’s Fair, so clearly, there’s a nostalgia factor.

Climate Pledge Arena doesn’t look very impressive from the outside street level, given its old roof and the fact that the arena is mostly underground.

Street level is where fans in the upper bowl sit, with fans in the expensive seats needing to head down a few floors to get to their seats.

There’s a window on one end of the arena, allowing for some natural light — a rarity for an NHL rink.

Amazon owns the naming rights to Seattle’s new arena but chose to name it after “The Climate Pledge.”

The arena is aiming to be the “most progressive, responsible, and sustainable arena in the world.”

One of the neat facts about the building is that rainwater is used to resurface the ice. There’s also a living wall inside the building, with a total of 12,500 plants and trees on-site.

Climate Pledge Arena is located in the shadows of the Space Needle at Seattle Center.

It’s located in a relatively quiet area, though there are some hotels and restaurants nearby. Visiting fans will likely choose to stay at one of the many downtown hotels, which are about a 15- to 30-minute walk away from the rink. Pike Place Market is 1.2 miles away.

Love that the concourse is open to the bowl pic.twitter.com/TiWDr2IDbD

Unlike many NHL rinks, the arena concourse is open to the ice surface. That allows fans to soak in the atmosphere even while in line for food or drinks, similar to many MLB stadiums or an older hockey arena like the Pacific Coliseum in Vancouver.

While fans online were outraged at the prices, there are a number of interesting food options at Climate Pledge Arena.

Important update… these are the beverage prices at Climate Pledge Arena pic.twitter.com/YF45pvH1wk

Among the most intriguing options are tenderloin steak tartare and roasted bone marrow. You can also find “Big Chicken,” which is owned by Shaquille O’Neal, among other options on the concourse.

There are four “Just Walk Out” enabled stores, allowing fans to take items from shelves with Amazon technology automatically detecting what you took for billing purposes.

The Kraken’s senior vice president of game presentation and live entertainment was hired from the Vegas Golden Knights. While it doesn’t quite capture the over-the-top feel of T-Mobile Arena in Las Vegas, there is some Golden Knights influence in Seattle.

Music is louder than most arenas, which is a trait they share with Vegas.

There’s even pomp and circumstance behind the scenes; Kraken players walk through fog outside their dressing room before hitting the ice.

This was about two minutes before the Kraken hit the ice for warmup. Smoke machines already on. pic.twitter.com/hxL4NRKtJk

Seattle joining Vegas high in the rankings for one of the coolest walkways between the ice & locker room. pic.twitter.com/QoufJJ5uZT

The fans are loud

The Kraken already proclaims that their fans are the “best” and “loudest” in the NHL. They’ve also already retired jersey No. 32 in honour of their supporters. While all that may be premature after just one game under their belt, the hometown crowd deserves full marks for their effort.

A huge percentage of fans came decked out in Kraken jerseys. They arrived early for the game, many of them well before warmup. They were engaged in every aspect of the game, and when the Kraken scored each one of their goals, the arena erupted like their team had scored an overtime playoff goal.

But most importantly, they booed Bettman.

They booed Bettman. This really is a hockey town. pic.twitter.com/7bWCIvipVJ

While that enthusiasm will be hard to replicate going forward, it still seems clear that Climate Pledge Arena is one of the best places to watch an NHL game this season.