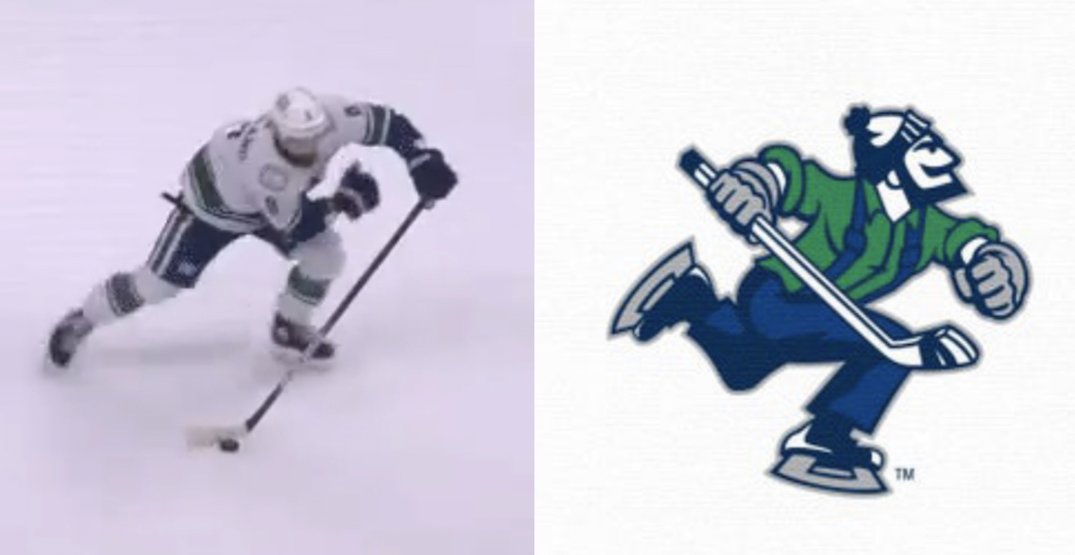 We just need the NHL to let Conor Garland replace his helmet with a tuque and uniform with jeans, suspenders, and flannel shirt to complete the look.

Garland was already well on his way to becoming a fan favourite.

An outstanding addition to the Vancouver Canucks this season, Garland was acquired as part of the trade that brought Oliver Ekman-Larsson to Vancouver. The 25-year-old currently leads the Canucks in points (8), and is ninth in NHL scoring. He’s the first player in Canucks history to record a season-opening, six-game point streak to start his tenure with the team.

Not only does he score, the Massachusetts native agitates, finding a way to piss off opponents with regularity. He even got into it with a fan in Seattle, staring down a heckler after his go-ahead goal on Saturday.

And then there’s the fact that he looks exactly like Johnny Canuck.

Comparisons began after Garland’s empty-net goal in Chicago, where the undersized winger controlled the puck on his forehand with his left arm, while pumping his right fist for maximum speed.

Never have I seen such hustle on an empty net goal lmfao. #Garland #AngryLittleElf pic.twitter.com/ee1rAyGOCc

Reddit user fish-rides-bike noticed, and posted this hilarious side-by-side comparison after the game.

Remarkably, Garland impersonated Johnny Canuck two nights later, before his game-winning goal in Seattle — although only briefly. Credit to -1701- on Reddit for spotting that one.

GARLAND TURNED ON THE JETS FOR THIS ONE 🚀 pic.twitter.com/VXUafrWtpb

Players typically push the puck forward with the tip or backhand side of their stick blade, keeping the puck well ahead of them when holding their stick with one hand. Garland appears to prefer this method, and really, who’s going to argue with the results?

When Garland was acquired by the Canucks this summer, he greeted the media with a moustache. He now sports a bushy beard, which is only helping the transformation.

This needs to be his Halloween costume, right?