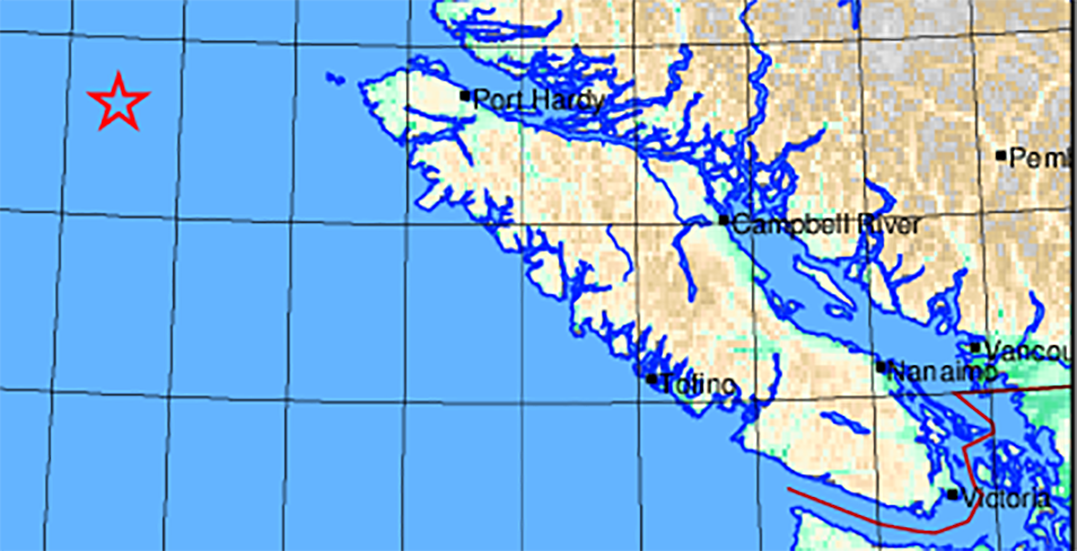 A magnitude 4.8 earthquake has struck the coast of Vancouver Island.

According to Earthquakes Canada, the seismic event took place on Wednesday afternoon at 12:20 PM PST, in the Port Hardy area.

The depth of the quake was relatively shallow, at 10 km. Based on the location of the earthquake, Natural Resources Canada says that the event was not felt and that no reports of damage are expected.

There is also no perceived risk of a tsunami taking place either.

A string of earthquakes in December 2019

Wednesday’s seismic event is the first notable earthquake following a string of nine quakes that struck the coast of BC in late-December.

Six earthquakes were recorded within a 12-hour period on Monday, December 23, 2019. According to the US Geological Survey, the strongest earthquakes of the first six were two magnitude 6.0 quakes.

Another strong magnitude 6.3 earthquake struck the coast of British Columbia on Christmas Eve at 7:36 pm PST.

On Christmas Day, two earthquakes also occurred: a magnitude 4.2 quake at approximately 8:25 am PST, and a magnitude 4.9 quake that happened at 12:38 pm PST.

Each earthquake occurred in the same general area, near the fault line that divides the Explorer Plate and the North American Plate. All quakes were relatively shallow, with the USGS reporting a depth of 10 km.

In comparison, the devastating earthquake that hit Christchurch, New Zealand, in 2011 had a magnitude of 6.2, an epicentre located just 7 km from the city, and a depth of only 5 km. It resulted in 185 deaths, approximately 2,000 injuries, and over USD$10 billion in damage.

In 2001, the magnitude 6.8 earthquake in Washington State had an epicentre in Puget Sound in an area about 60 km southwest of Seattle. Even though the earthquake had an extreme depth of 57 km, it still caused 400 injuries and one death, created approximately USD$2 billion in property damage, and was strongly felt in Vancouver.