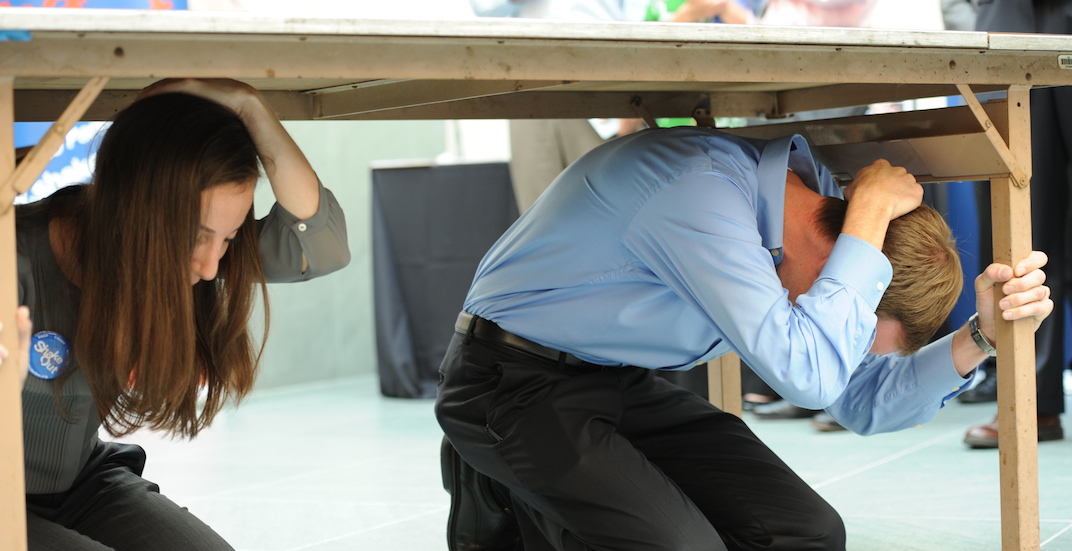 People taking shelter under a desk during an earthquake drill. (FEMA)

Earthquake preparation awareness in BC has increased over the last few years with major earthquakes elsewhere in the world acting as a reminder of what could happen here.

Geologists have long predicted that Metro Vancouver is overdue for a significant tremor, whether it be a ‘megathrust’ earthquake that happens on the subduction zone off the west coast of Vancouver Island or a crustal seismic event closer to home with an epicentre in the Strait of Georgia.

Either of these possibilities played out would be devastating.

While much has been said about preparing emergency kits and having a post-disaster plan, what arguably matters most is the immediate life-and-death situation of how you react when the earth around you starts shaking.

Here are some proper earthquake safety procedures your life will depend on, according to the provincial government’s manual on earthquake preparedness:

Panicking when the earth shakes by running outside could put you at further risk for injury as you could be hit by flying exterior debris. Remember that the areas near the exterior walls of a building are the most dangerous place to be as it is usually the first part of a building that collapses.

2. Drop down onto your hands and knees

During a major earthquake, moving around or even crawling is extremely difficult. The shaking can be so strong that you will not be able to move far, and objects may fall or be thrown at you.

Before the earthquake knocks you off your feet, get down onto your hands and knees. This position protects you from not only falling but allows you to still move if necessary.

3. Cover your head and neck – and your entire body if possible

If there is no shelter nearby, like a sturdy non-glass table, get down near an interior wall or next to low-lying furniture that will not fall on you and cover your head and neck with your arms and hands.

If your desk or table has legs, hold onto it a few inches above the ground to avoid pinching and be prepared to move with your shelter, as it will likely move around significantly from the shaking.

Here are a few other pointers for varying indoor situations:

4. Immediately get into an open area

Flee to an open area away from trees, buildings, walls, and power lines. Be alert for any flying debris.

The areas next to the exterior walls of a building, such as sidewalks, are often the most dangerous place to be when outdoors. Windows, facades, and architectural details are often the first parts of the building to collapse.

5. When you are driving

If the earthquake occurs when you are driving, pull your car to the side of the road, stop, and engage the brakes. Avoid overpasses, bridges, tunnels, power lines, light posts, trees, or large overhanging signs. However, only stop and pull your car if it is safe to do so.

When the shaking stops

6. Stay where you are when the ground stops moving

Remain where you are and slowly count aloud to 60 when the shaking stops. This is an important step in order to account for any immediate aftershocks. It will not only calm you, but it will also allow for debris to finish falling.

After counting to 60, stay calm and check for injuries. Ensure everyone is safe and uninjured, and apply first aid if qualified.

Do not move any seriously injured individuals unless they are in immediate danger.

Remain alert for any falling debris.

If you are at home, check your neighbours after ensuring the safety of your own family. Your first help after an earthquake will not be from first responders, but rather family, neighbours, and friends.

Confine and comfort any frightened pets.

If you smell gas, refrain from lighting machines and candles or operating any electrical switches. Check for fires, gas and water leaks, and damaged electrical wiring or sewer lines.

Stay at least 10-metres away from downed power lines.

Emergency water may be obtained from water heaters, melted ice cubes, toilet tanks, and canned vegetables. If water supplies are required in an emergency, purify water by straining it through a paper tower or several layers of clean cloth and then boil vigorously for at least six minutes.

However, do no use BBQs, camp stoves or unvented heaters indoors, and do not flush a toilet if the sewer line is damaged.

Expect to be on your own for as long as 72 hours after a major earthquake.

Turn on your portable radio for instructions and news reports, and cooperate fully with public safety officials.

Refrain from using the telephone unless there is a severe injury, fire, or gas leak to report. Help keep 9-1-1 operator lines clear for the most urgent emergencies.

Post-disaster situations can be an opportune time for crime. Remember to protect your home and property from intruders and looters.

Always assume a tsunami is imminent

If your community is a high-risk location for a tsunami, always assume a tsunami is imminent. It is better to be safe, do not take risks – there is little time to waste.

It is estimated a tsunami generated from an earthquake on the subduction zones west of Vancouver Island will take 20 to 30 minutes to reach the westernmost BC coastline.

Go to high ground immediately when the earth stops shaking. Do not rely on your portable radio for tsunami alerts and evacuation advisories as the infrastructure to broadcast warnings may be damaged.

Inland coastal communities that are also at risk include Squamish, parts of Vancouver, and large sea-level areas such as Richmond, Delta, Surrey, and Tsawwassen.

Coastal inlets, fjords, creeks, rivers, and valleys are dangerous as well when large volumes of tsunami waters squeeze and funnel in through a narrow area.

Large tsunami waves can also travel many kilometres inland over low-lying flat ground, as it did during the Japan 2011 tsunami.

One significant early sign of a tsunami after an earthquake is an abnormally low tide caused by a rapidly receding tide.

Remember that tsunami waves are multiple waves; these devastating waves are not single waves, but rather repetitive wave trains that can last for hours after the first wave. Tsunami waves will also recede and bring a mass of debris back into the ocean, including homes, furniture, animals, trees, bodies, animals, cars, and boats.

Be prepared for aftershocks

13. Aftershocks are common after earthquakes

This is an updated version of a Daily Hive article written in 2012.