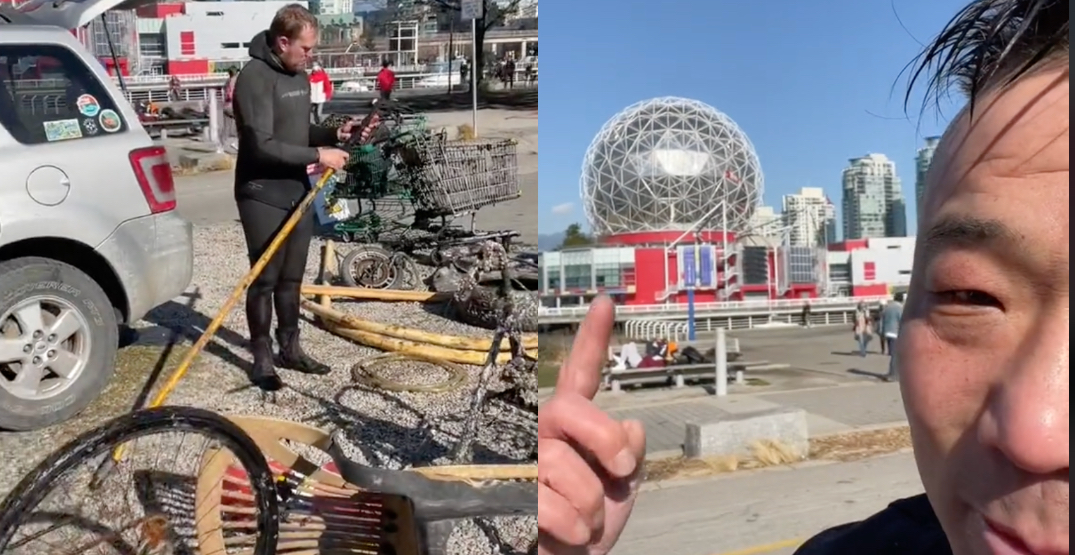 There’s a lot of garbage in the waters around Vancouver, and one organization is working to keep trash where it belongs.

Three scuba divers and one free diver braved the chilly waters near Science World to fish out the refuse from the water.

@cleanerlakes 552 lbs of trash pulled out of False Creek, Vancouver. So much more down there! Thanks to @aquatic__monkey and @_hollyepearson for coming out. #scubadiving #trash ♬ original sound – Henry Wang

In a video posted to the Cleaner Lakes TikTok, you can see the scale of the clean-up.

In the video, Wang says that he’s done a lot of dives underneath a certain dock in False Creek.

“There is a whole bunch of trash underneath it,” he says.

After about an hour, the team pulled up nearly 600 pounds of garbage.

The trash pulled from the water included a mountain bike, two shopping carts, a completely packed suitcase, a duffel bag with a 25-pound weight inside, a handful of cell phones, and much more.

“There’s so much more down there, we just couldn’t see anything anymore,” said Wang in the video.”

In case you haven’t already heard of them, Divers for Cleaner Lakes and Oceans is a volunteer-run non-profit. They meet to clean trash out of the waters around Metro Vancouver.

Last year, they pulled more than a thousand pounds of trash out of the water at Lonsdale Quay. Keep following their clean-up journey to learn more and support the cause.