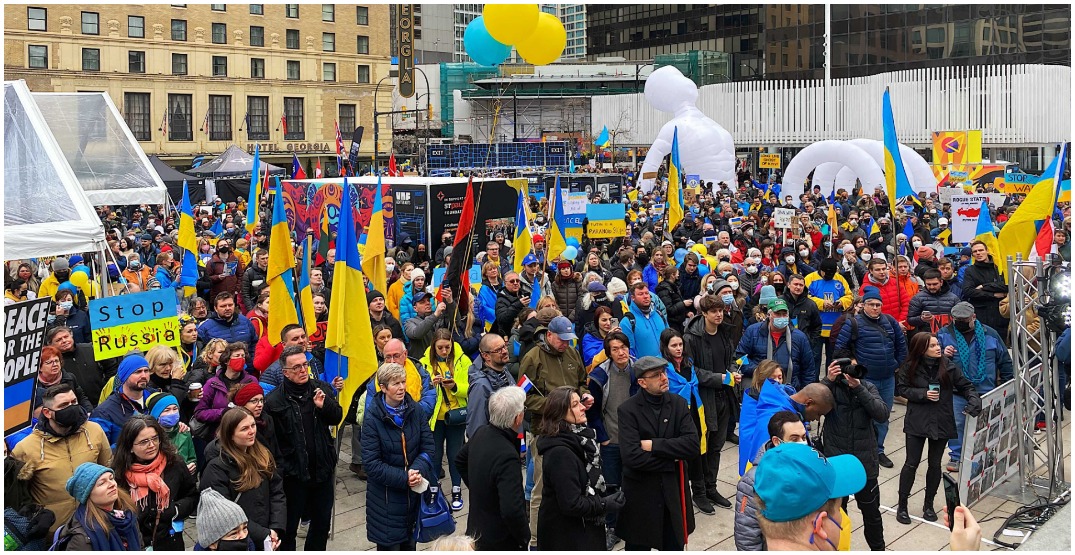 Thousands gathered at the Vancouver Art Gallery on Saturday afternoon to demand justice for Ukraine.

They will be marching from there to Canada Place, and will continue their parade around the downtown core.

Photos from ‘Stand in solidarity with Ukraine’, a peaceful protest against the Russian invasion into Ukraine, taking place outside the Vancouver Art Gallery right now. @DailyHiveVan pic.twitter.com/B0DBgZBlgc

The organizers were Ukrainian, but countless Vancouverites attended as well. Cars passing by honked to show their love for Ukraine, which is being attacked relentlessly by Russian forces.

They also got to listen to speeches from politicians and community leaders, among them MLA David Eby, MP Taleeb Noormohamed, and others.

The march is happening on Saturday, February 26, but there are more solidarity efforts being planned across the country.

Signs of support for Ukraine can be spotted all over the city, with BC Place and City Hall lit up in blue and yellow and Russian liquor off the shelves in BC Liquor Stores.

Starting tonight #Vancouver City Hall and Burrard Bridge will light up blue and yellow in support and solidarity with the citizens of our sister city since 1944, Odessa, and the people of #Ukraine. pic.twitter.com/ntRkcUKxLu

Anyone unable to attend who still wants to make a difference is encouraged to donate and write letters to their elected officials asking Canada to send more resources to Ukraine.

Vancouver’s own Ryan Reynolds did exactly that this week, vowing to match $1 million in donations to Ukraine to provide double the funds.

Organizers told Daily Hive Vancouver police will be on site to help with crowd control.

#VanTraffic: We are expecting significant traffic delays throughout downtown Vancouver today due to several planned protests. We will have extra officers working to mitigate the disruption. Please plan alternate routes if possible.

Police said they had extra officers on-hand to mitigate the traffic disruptions caused by the protest.