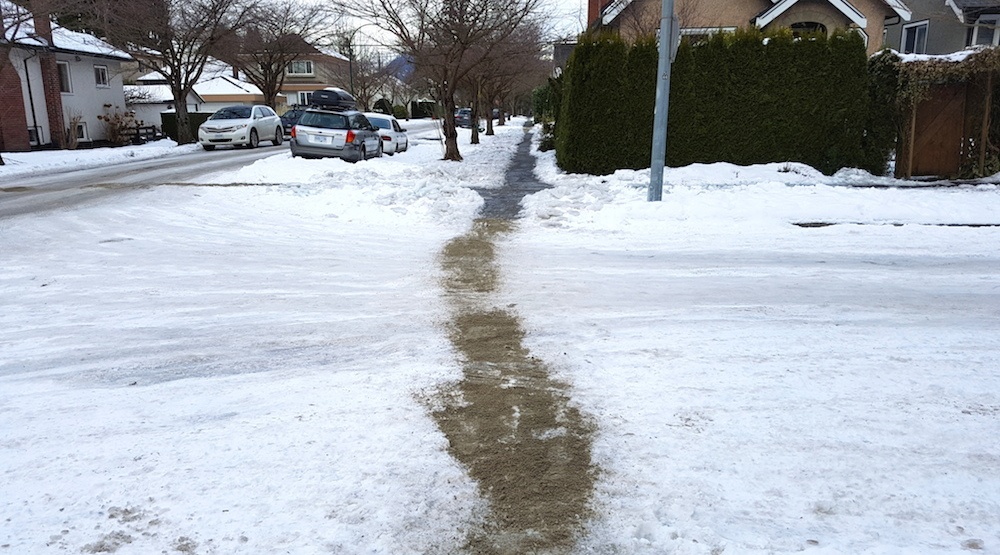 The last time the City of Vancouver made an official effort to brine, sand, and salt all of its residential side streets was 20 years ago when a blizzard dumped several feet of snow onto the city within just a matter of days. Not even the snowstorm of 2008 received this kind of treatment.

So to see City crews driving salting trucks on side streets is somewhat unprecedented, given that the municipal government only possesses 46 plow and salting-enabled trucks that are normally only utilized for arterial roads during snowfall events.

Crews have also been seen salting and sanding the icy crosswalks of side streets and alleyways. 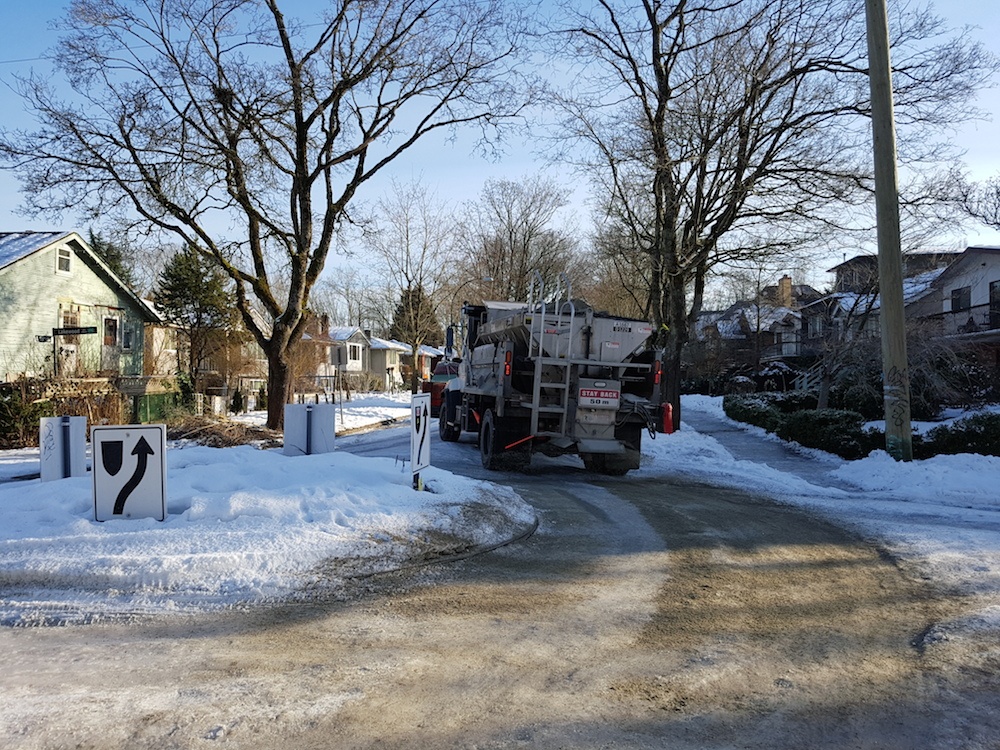 A salting truck makes its way through a residential side street in Vancouver. (Photo by: Daily Hive) 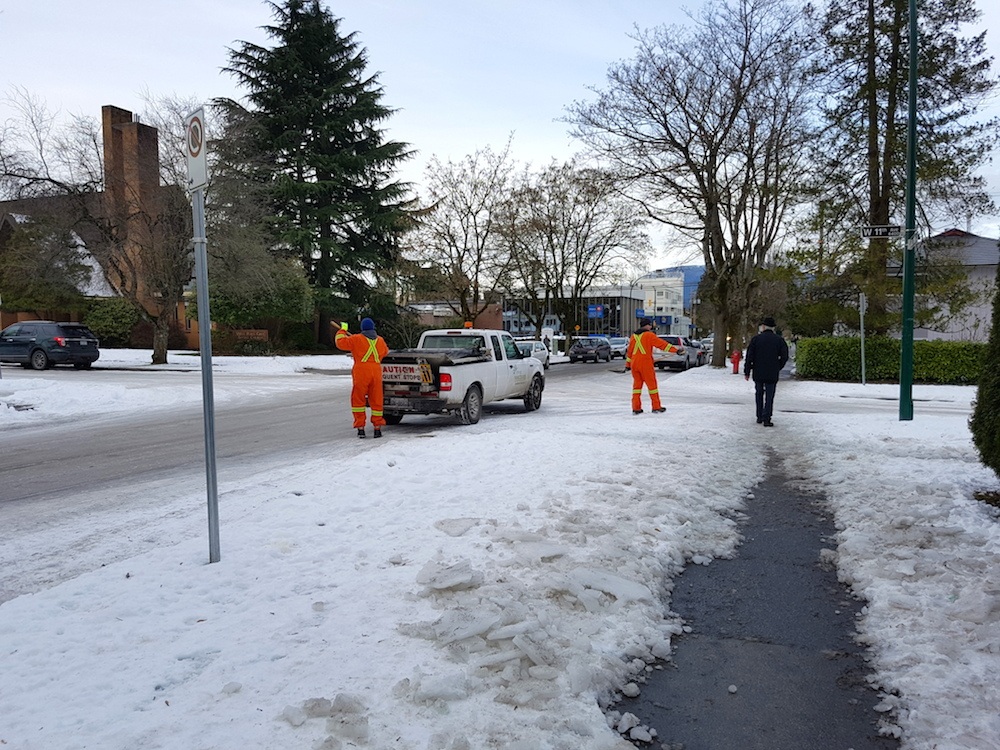 Crews with the City of Vancouver create a crosswalk path of sand and salt across icy roads and sidewalks. (Photo by: Daily Hive) 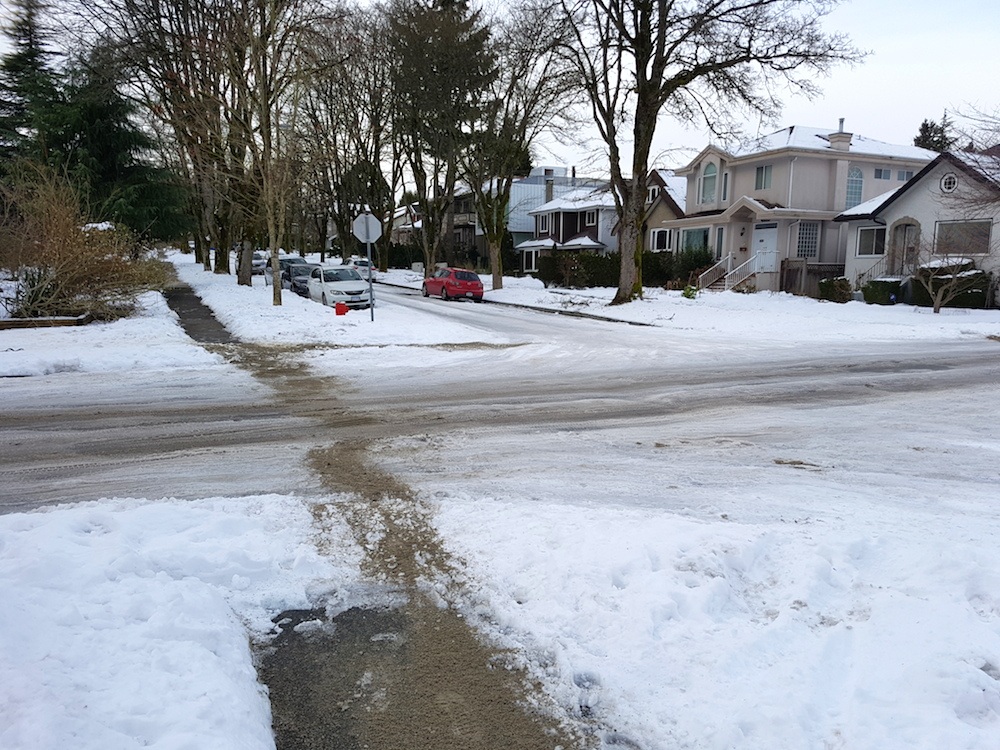 Crews with the City of Vancouver create a crosswalk path of sand and salt across icy roads and sidewalks. (Photo by: Daily Hive)

All of this began on Tuesday when the municipal government said it would step it up and expand its snow and ice mitigation efforts to include residential side streets. Following the snowstorm that hit on New Year’s Eve, many of Vancouver’s streets resembled skating rinks with a layer of an inch or more of smooth, solid ice.

Ice-covered sidewalks and side streets have crippled the city for more than a month, prompting many to stay at home and keep their car in the garage. Some neighbourhoods have experienced missed garbage and recycling pickups for weeks due to snow and ice in alleyways.

As of Tuesday, City officials have spent $2.5 million on snow and ice mitigation efforts this winter season – more than three times the budget of $750,000 – and utilized 7,000 tonnes of salt, which is seven times more than its annual consumption in recent years. On the same day, 150 staff were reassigned to snow and ice mitigation duties, specifically for side streets.

Free salt and sand has also been made available at 10 fire stations in the city over four occasions.

Between 2 cm and 5 cm of snow is expected to fall in Metro Vancouver beginning later today.