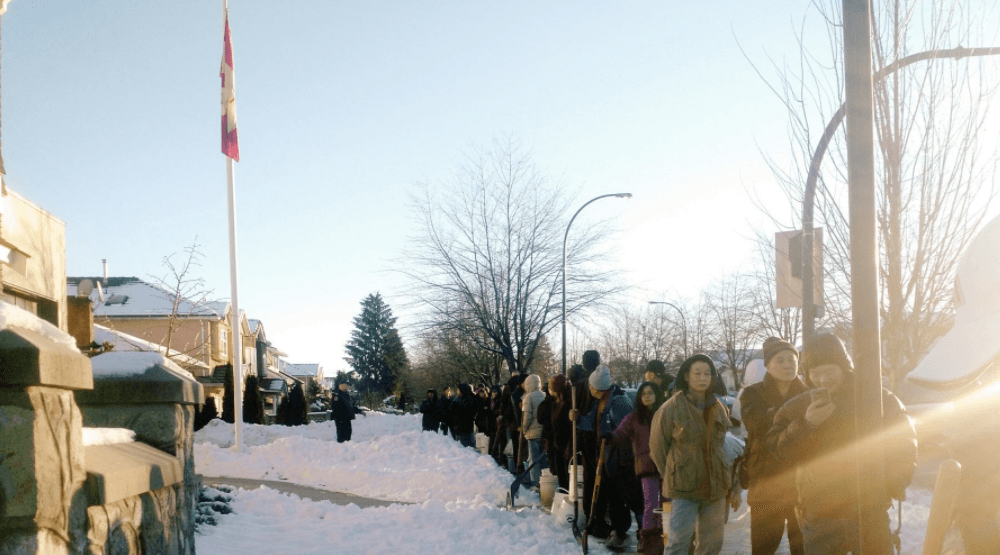 Residents line up outside Fire Hall 15 for salt (@Xavier/Twitter)

While winters like the one currently gripping Vancouver are rare, they do happen and one councillor believes more needs to be done by the city to prepare for them.

And with recent issues surrounding the city’s salt supply status, NPA councillor Melissa De Genova is now calling for an inquiry into the matter. “I’ve heard from people who are angry, confused, upset, and Vision Vancouver is not taking this seriously,” she told Daily Hive.

And while De Genova recognizes and appreciates the fact that a large amount of time and energy is spent by city staff planning – and preparing – for things like earthquakes and other natural disinters, she wonders why similar energy isn’t put into extreme weather preparation.

She recalled the winter of 2009, which was the last time the city dealt with serious snow issues, noting that at the time, Mayor Gregor Robertson said steps would be taken to prevent major issues with snow in the future. Ultimately though, she said, that didn’t happen.

De Genova said the city is also setting a double standard when it comes to snow removal rules.

She questioned why the city tickets and fines people who don’t clear ice and snow off their property in accordance with bylaws, but doesn’t seem to hold itself to the same standard.

On Twitter, she wrote that Vision Vancouver didn’t use the recently implemented 0.5% tax hike on any winter weather preparation but fines residents $250 for not clearing walkways.

De Genova noted the tax increase was put through primarily because of the fentanyl crisis in an effort to help keep streets and residents safe, but wonders why no thought or extra money was allocated to keep streets safe for vehicles in winter weather – particularly emergency responders who respond to emergency calls regarding things like fentanyl overdoses.

“I’ve received pictures from seniors who have fallen and hurt themselves,” she noted.

Then there’s the fact people have now been forced to line up for – and collect – their own salt at fire stations around the city.

While the gesture may have been meant in good will, De Genova said choosing the firehalls as the pick-up location was another mistake.

“Firefighters have their own job to do,” she remarked. “They’re not salt ambassadors.”

And lining up to collect their own salt is not something taxpaying residents should even have to do in the first place, the councillor added. “The city is advertising it as ‘free salt,'” she said. “It’s not free. It’s salt purchased by the city using taxpayer money, and now we’re asking citizens to come stand in line to pick it up during a weekday when most people have to work?”

De Genova plans to call for an inquiry into how much was spent on the salt as well as future snow removal plans. She also wants to address concerns she’s heard from residents and will to bring all these issues to the first council meeting of the new year, scheduled for January 20.

Another councillor is questioning the city’s response to winter in general. On Twitter and Facebook, Councillor George Affleck is calling for an “independent third-party review of the City of Vancouver’s winter strategy for snow clearing.”

While De Genova understands it’s the holiday season and time away from work with family and friends is important, she said the mayor still has to answer and be accountable to citizens in situations such as these.

Instead, “the mayor is nowhere to be seen,” she said.

A Thursday evening tweet by Gregor Robertson thanked people for their “patience” and “cooperation” around the ice and snow situation.

This winter has been challenging for all. Thx for patience and cooperation, and to everyone doing their part to keep streets safe #vanpoli