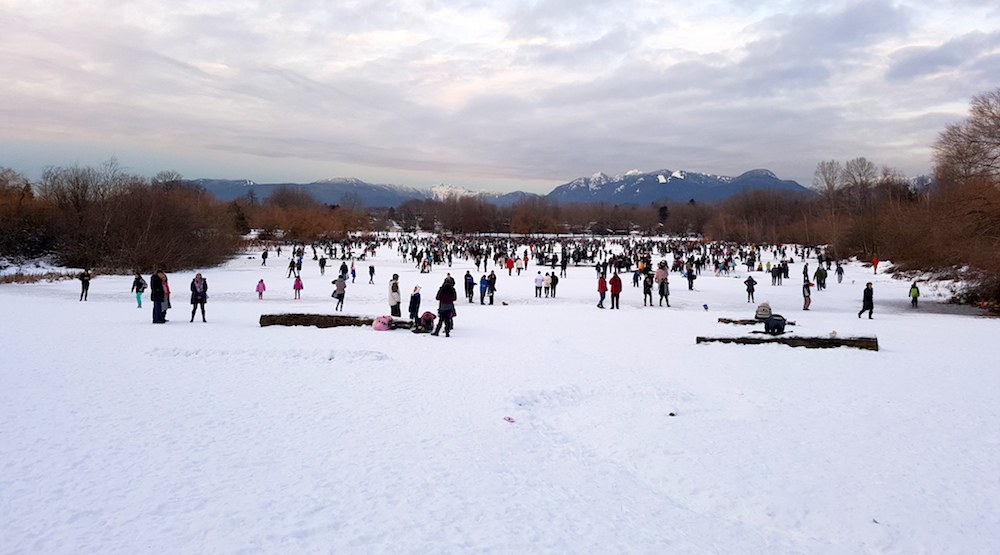 Well, that didn’t last long. Those who were waiting to skate on Trout Lake tomorrow will have to make alternate plans: The Vancouver Park Board announced this evening that the lake’s frozen surface will be closed to free skating on Sunday due to safety reasons.

Donnie Rosa, the Director of Recreation for the Park Board, told Daily Hive that warming temperatures, tomorrow’s forecast of rainfall, and heavy usage are causes for concern. Temperatures in the city reached a high of 3°C this afternoon and at one point thousands of people were seen on the ice at the same time. Surface slush has also appeared from heavy use.

The ice conditions will be assessed and the Park Board will determine tomorrow whether Trout Lake will reopen for skating on Monday. Colder weather and more snowfall is currently forecasted for the coming week, but until then temperatures are expected to hover above the freezing point.

Lifeguards supported by Park Rangers will be on site from 6 am to 10 pm tomorrow to keep people off the ice.

A minimum ice thickness of five inches is required for safe skating. Prior to the weekend, the Park Board stated that the ice was just under eight inches in some areas.

Other pond ice surfaces at Vanier Park and Lost Lagoon in Stanley Park remain unsafe to skate on because of thin ice.

Park Board officials originally hoped that the ice surface would remain suitable for safe skating through the weekend. The ice will remain open to skaters until 10 pm tonight.