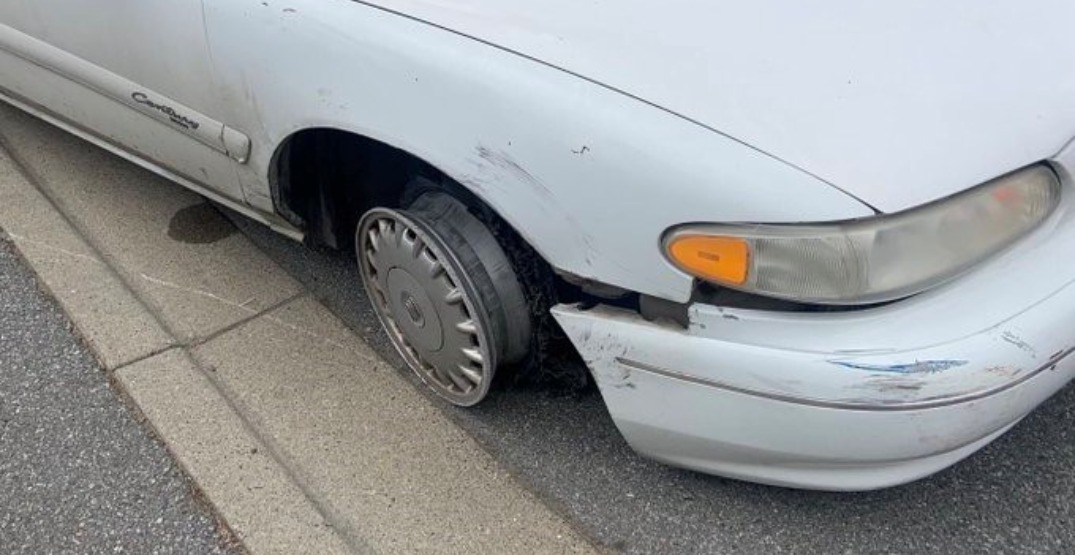 The driver of a car with a missing tire was arrested for impaired driving on 4/20, according to White Rock RCMP.

Officers received multiple 911 calls about the vehicle “missing a front tire” and swerving in the eastbound lane of Marine Drive near Magdalen Crescent, a statement says.

In line with the cannabis-inspired holiday, the driver might have been on drugs, police say.

White Rock RCMP says that “during the investigation, it was learned that this vehicle had failed to remain at the scene of a motor vehicle collision in Langley, BC, approximately an hour earlier.”

Thank you to the good citizen for calling us on April 20th for the allegedly drug impaired driver that was driving on Marine Drive with one tire missing. Driver arrested & charges pending. Suspected hit and run to a parked car also located in Langley. pic.twitter.com/R5qwQQZOGT

Officers found the vehicle and conducted a traffic stop around 4 pm.

There was only one occupant in the car with a missing tire: a woman from Langley in her mid-40s.

After being arrested, she was sent to the White Rock RCMP detachment for further testing by a drug recognition expert.

Her vehicle was also impounded and “criminal code charges may be forwarded at a later date,” the police said.

That’s probably not how the driver was hoping their 4/20 would go — but them’s the brakes.

There was another car with a missing tire seen in Richmond recently. It was parked near a SkyTrain Station and posted on Facebook in April.

Daily Hive Vancouver reached out to White Rock RCMP and will update this article.