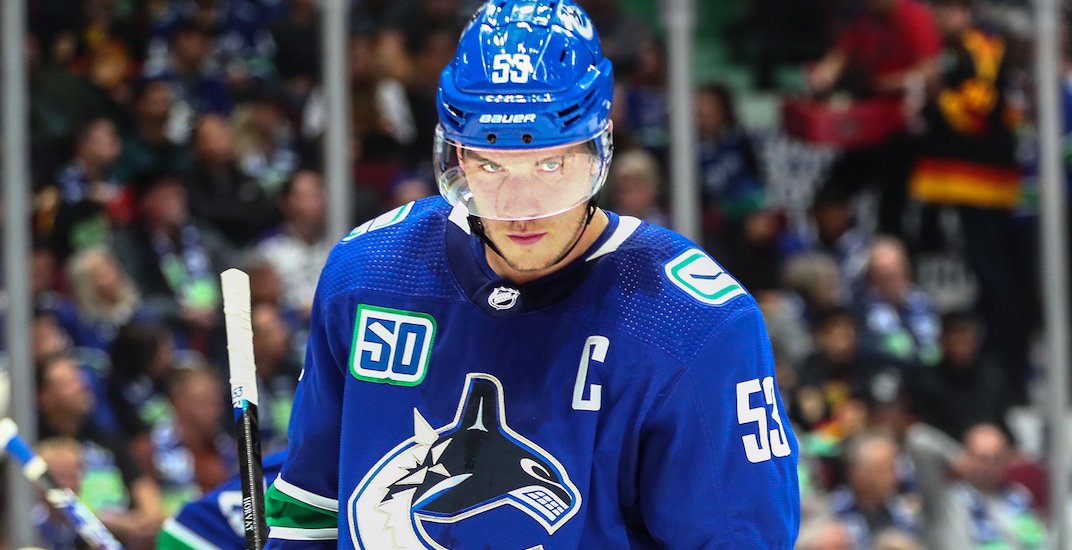 We bought the t-shirts and everything.

The Vancouver Canucks certainly looked like a different team to start this season. Better on paper, there was a lot to like about their play on the ice after they jumped out to an 8-3-1 record in October.

Unlike previous strong starts in recent years, the Canucks’ underlying numbers had even the most pessimistic observers reserving judgement.

And yet, here we are.

Following perhaps their worst beatdown of the season, with a 6-3 score that flattered them in Las Vegas, the Canucks are falling down the Western Conference standings.

“We weren’t very good, we looked a half step behind most of the night,” head coach Travis Green told reporters after the loss to the Golden Knights. “That’s what’s going to happen (getting beat badly) when you don’t play well and you’re a half step behind.”

The Canucks are now four points back of a playoff spot, and five points ahead of the last-place team in the West. That’s not an insurmountable deficit by any means, but it certainly turns up the pressure in the here and now.

Vancouver has lost three of their last four games, with their only win coming in the form of a heroic 43-save shutout by goaltender Jacob Markstrom.

But this is no longer a small sample of futility.

Since November 1, the Canucks rank:

The one exception to these woeful rankings is their power play, which has caught fire since Quinn Hughes joined the first unit and ranks third in the NHL (25.3%) since the start of November.

The underlying numbers no longer favour the Canucks in the past month and a half, as Vancouver ranks 20th in Corsi-for percentage (49.46%).

They’ve been hit with the injury bug, but not to a devastating degree. Since November 1, they’ve been without Alex Edler (missed 7 games), Jay Beagle (9), Brandon Sutter (13), and Micheal Ferland (20) — but most NHL teams have to deal with similar issues, so that can’t be an excuse.

Following the loss in Vegas, Canucks fans online began turning up the heat on GM Jim Benning and for perhaps for the first time some even directed their ire at the head coach too.

All this adds up to a monumentally important stretch of games before the Christmas break.

The Canucks’ next four games are all against teams currently holding down a playoff spot, beginning with a visit from the Montreal Canadiens on Tuesday, followed by games against the Vegas Golden Knights, Pittsburgh Penguins, and Edmonton Oilers. They’re all going to be played at Rogers Arena, where Vancouver is 8-4-3 this season, but you guessed it, only 4-4-2 since November 1.

Was October just a mirage? Because if it was, there’s trouble ahead — a feeling Canucks fans know well — and we could be talking about the draft lottery again in a couple of months.

But I’m willing to bet they’ve got a bit of ‘Team Like That’ still left in them.

Brock Boeser, who leads the team with 18 points since November 1, has a 7.8% shooting percentage during the same time period, which is well below his career average of 13.8. Bo Horvat’s shooting percentage sits at 5.5% in the last month and a half, well off his 12.1% career rate.

Those are two of the Canucks’ best players, who will bounce back.

Elias Pettersson has another gear, particularly at even strength where the Canucks have struggled to produce offence.

The margin of victory is slim in the NHL, as evidenced by the fact that Vancouver has been leading, tied, or within a goal in the third period of every game except for losses in Calgary on October 5, Dallas on November 19, and Sunday in Vegas.

In order for this to be considered a successful season, the Canucks, at the very least, need to be in the race in March. That’ll be hard to do if they can’t turn things around soon.

Most pundits picked the Canucks to miss the playoffs this season, but October increased expectations.

We’ve got the t-shirts, damn it.