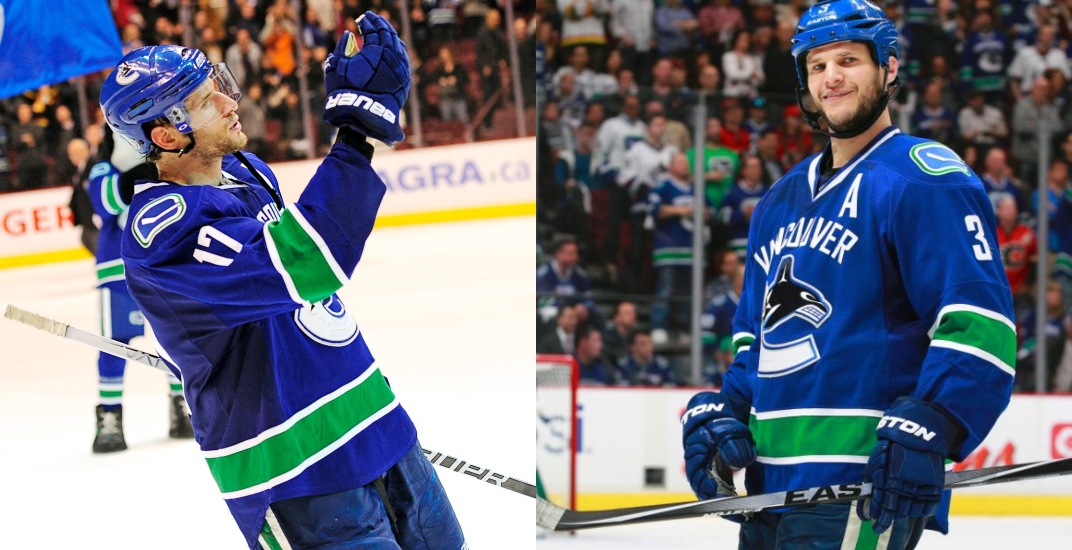 Ryan Kesler and Kevin Bieksa have entered the world of podcasting.

The “Kes and Juice Podcast” debuted today, promising to talk about “hockey, life, and other stuff.”

Longtime teammates with both the Vancouver Canucks (10 years) and Anaheim Ducks (3), Kesler and Bieksa have a lot more time on their hands these days. Bieksa, 38, is effectively retired, and hasn’t suited up since the Spengler Cup last year. Kesler, 35, is on long term injury reserve with the Anaheim Ducks and may have already played his last game due to a hip injury.

“It’s a chance to show off our personalities,” Kesler explained, before acknowledging the differences between how he and Bieksa are perceived.

“I think people get you (Bieksa) but a lot of people don’t get me,” Kesler added.

“People are going to like you (Kesler) when they get to hear you,” Bieksa said. “You were guarded [with the media in Vancouver]… When people get to actually listen to you talk, they’re going to understand why we’re friends.”

The pair spent a long time talking about their old team, with Bieksa explaining: “[The Canucks] still have a place in both of our hearts. We spent a lot of time there. We want the team to do well and get back to the playoffs.”

“I know it was a tough break up, but they’ll always have a place in my heart,” said Kesler, whose relationship with the fans in Vancouver soured when he forced a trade to Anaheim in 2014.

“When you touch the puck and you get booed every time, it definitely hurt,” said Kesler.

Kesler and Bieksa spoke about a number of things on their first podcast, discussing issues past and present. It may remind fans of the popular hockey podcast Spittin’ Chiclets, with ex-players talking openly about their playing days, with a bit of swearing mixed in.

On the topic of abusive coaches, Kesler shared his own experience from early in his career, without naming anyone in particular.

“I was kicked, I was verbally assaulted, to the point where I needed to start talking to a sports psychologist,” said Kesler.

Todd Bertuzzi was the duo’s first guest, with the ex-Canucks winger sharing an amazing story about the players partying every night during training camp and showing up to practice hungover.

Before signing off, Bertuzzi offered Kesler and Bieksa some lighthearted encouragement with their new venture: “Good luck with this sh*t. I hope you don’t f*ck it up.”