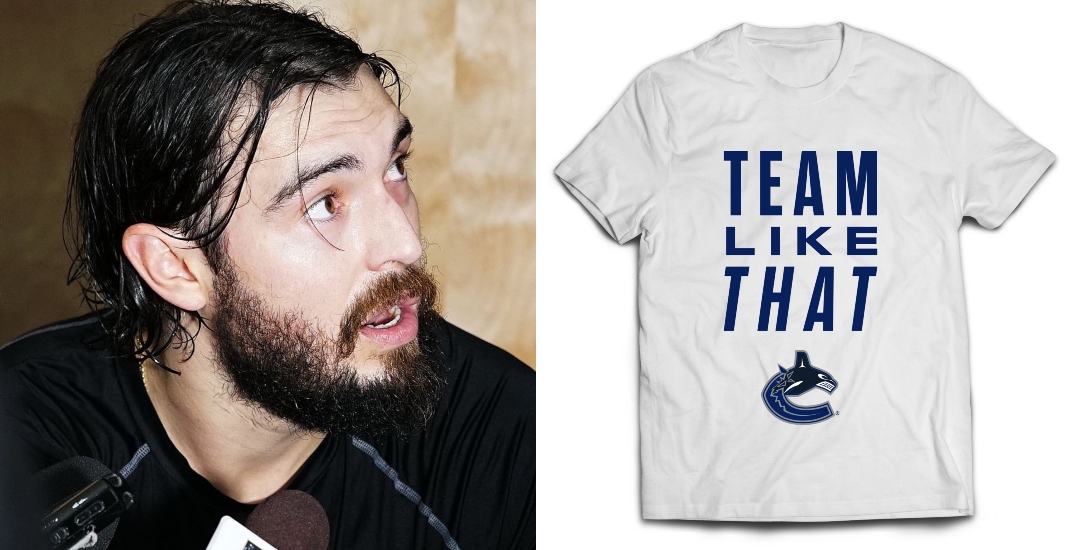 After years of being the butt of jokes, it’s the Vancouver Canucks’ time to get a little sassy.

As a response to LA Kings defenceman Drew Doughty’s comments following the Canucks’ 8-2 stomping of his team on opening night, Vancouver has a rallying cry for its good young team.

Doughty was defiant after the LA Kings were run out of Rogers Arena on October 9.

“A team like that should not be beating a team like ours 8-2, there’s absolutely no way,” he told reporters.

Kings defenseman Drew Doughty wasn’t holding back after 8-2 loss to the Canucks tonight: “It’s (expletive) just embarrassing. A team like that should not be beating a team like ours 8-2, there’s absolutely no way."

As an encore, the Canucks put the boots to the Kings again last night — this time on LA’s home ice. The Canucks merely won 5-3 this time around, a score that actually flattered the Kings, as Vancouver outshot LA in the game 49-24.

that would look good on a shirt

Taking a page out of the Carolina Hurricanes’ “Bunch of Jerks” book, the Canucks are producing “Team Like That” T-shirts. They’re real, they’re spectacular, and the Canucks are selling them online for $30.

“I think we’ve proven to him, and we’re going to continue to keep proving we’re a great hockey team,” Horvat said.

Revenge is a dish best served cold, and there aren’t too many teams that deserve it fed to them more than the LA Kings.

Canucks fans certainly remember this quip after the Kings eliminated them in 2012:

To everyone in Canada outside of BC, you're welcome.

The 8-3-1 Canucks are off to a great start this season, with the sixth-best points percentage and the best goal-differential in the league right now.

While there’s a lot of hockey to be played between now and the end of the season (70 games to be exact), there’s reason to be optimistic that a team like that can push for a playoff spot.