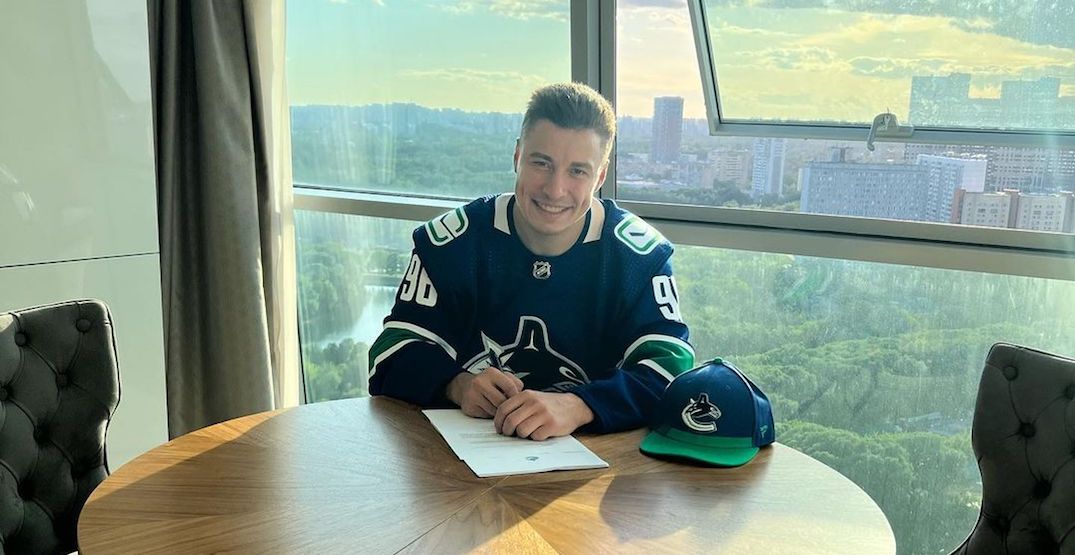 The most highly coveted free agent outside of the NHL will sign with the Vancouver Canucks. The 26-year-old Russian winger broke the news by sharing a photo of himself on Instagram in a #96 Canucks jersey while appearing to sign an NHL contract.

Kuzmenko can’t officially sign with the Canucks until July 13, when free agency opens league-wide, according to TSN’s Pierre LeBrun. But his agent Dan Milstein has confirmed Kuzmenko’s intent to sign with Vancouver, saying “contract details to be worked out soon.”

NHL rules dictate that Kuzmenko will sign a one-year entry-level contract. He’ll be eligible for unrestricted free agency in 2023.

Kuzmenko finished second in KHL scoring last season, with 53 points (20-33-53) in 45 games. The 5-foot-11, 194-pound left winger was never drafted, but there are people that believe he could be a top-six forward at the NHL level.

That includes Canucks management apparently, as according to TSN’s Darren Dreger, Vancouver has promised Kuzmenko an opportunity in their top six and power-play time.

Nearly every team in the NHL was interested in signing Kuzmenko, given the low risk and potential for a high reward. Vancouver was one of a handful of cities that Kuzmenko visited over the last week, as he met with a short list of teams.

Kuzmenko was spotted in Los Angeles, Las Vegas, Detroit, Miami, and Edmonton before landing in Vancouver on Thursday for the final stop of his North American tour. But the Canucks also met with him before then, as Bruce Boudreau and Patrik Allvin made hours-long drives to see him in Ann Arbor, Michigan according to CHEK’s Rick Dhaliwal.

“We would like to thank all the teams that we met with for their time and interest,” said Milstein. “We were impressed by what the Canucks organization wants to accomplish and the winning culture they are building. Andrei felt a good connection with the management team and is looking forward to playing for Bruce Boudreau.”

Once in Vancouver, it appears Kuzmenko was wined and dined at a pair of Aquilini restaurants in Yaletown — Blue Water Cafe and Elisa. By contrast, Kuzmenko was spotted at Joey Restaurant while he was in Edmonton.

Patrik Alvin drove for 4.5 hours for that meeting too.

Dhaliwal adds that Kuzmenko had a “good connection” with Allvin.

“I have been watching Andrei since his 2014-15 season and have been impressed with his development and improvement on the ice,” said Allvin. “Once the contract details are finalized, we look forward to welcoming him to the Canucks organization and helping him continue to grow as a hockey player.”

Allvin has been successfully adding European free agents, which was a stated goal by the Canucks GM after he was hired in January.

“This organization, with fewer [draft] picks coming up, I think this is a great landing spot for a lot of European and college Canadian players. So you’re gonna get opportunities,” Allvin said at the time. “We don’t want to use any excuses. We need to find ways to get better every day and I’m sure our scouting staff will be up for the task to find more players, better players.”

Kuzmenko is the third European free agent Allvin has convinced to come to Vancouver in the past two weeks, following the signings of Nils Aman and Filip Johansson out of Sweden.

“You’ve got to be open-minded and you’ve got to look for talent. You’ve got to trust your scouting staff, the people that work for you. We want to play a fast, skilled game. In order to be successful, you’ve got to be able to find players outside the first round of the NHL Entry Draft. You need to compliment the organization with college and European free agents.”