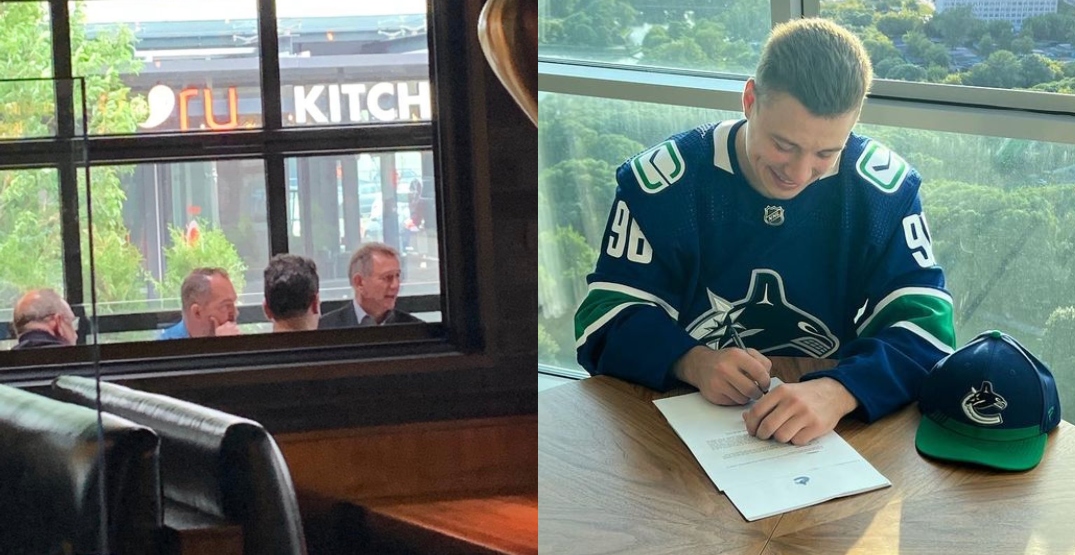 Is the way to Andrei Kuzmenko’s heart through his stomach?

If it is, you can understand why he chose Vancouver over Edmonton this morning.

It was probably more nuanced than that, but Canucks fans are sure having a lot of fun at the Oilers’ expense today.

Kuzmenko, the most highly-coveted free agent outside of the NHL, announced his intention to sign with the Vancouver Canucks this morning. It concluded a weeks-long sweepstakes, full of rumours and speculation.

The 26-year-old Russian arrived in Los Angeles earlier this month and conducted a multi-city North American tour, with stops in Las Vegas, Detroit, Miami, and Edmonton before arriving in Vancouver on Thursday.

Kuzmenko and his agent Dan Milstein posted photos on social media along their journey. While in Vancouver, it appears that Kuzmenko was wined and dined at a pair of high-end Aquilini-owned restaurants in Yaletown — Blue Water Cafe and Elisa.

Those restaurants aren’t cheap. Lobster and Wagyu beef are featured on Blue Water Cafe’s menu. Among the steaks you can order at Elisa is a 32-ounce porterhouse for $190 or a 50-ounce beef tomahawk for $225.

Meanwhile, in Edmonton, Kuzmenko was spotted at a chain restaurant where you can buy Baja fish tacos for under $19.

Holland out for lunch at Joeys with Woodcroft. Contract negotiations possibly? 👀🔍 pic.twitter.com/qX1nAITGiy

No offence to Joey Restaurant, which is a fine option for premium casual dining, but it may not be the top choice for wooing a potential free-agent signing.

Canucks fans were quick to point that out today.

Moral of the Kuzmenko signing: if you want to impress someone, don’t take them to a fucking Joey’s.

The Oilers tried to wine and dine Kuzmenko at Joey's 🤣

Ken Holland when he finds out Kuzmenko did NOT like his $9 house salad https://t.co/Jp803uT0ZC pic.twitter.com/bBRQ81HUHM

Kuzmenko: [bangs the table in frustration] "Restaurant is just called 'JOEY'. Not 'Joey's'. You keep calling restaurant by wrong name. Is bad for trademark." [Leaves in a huff]