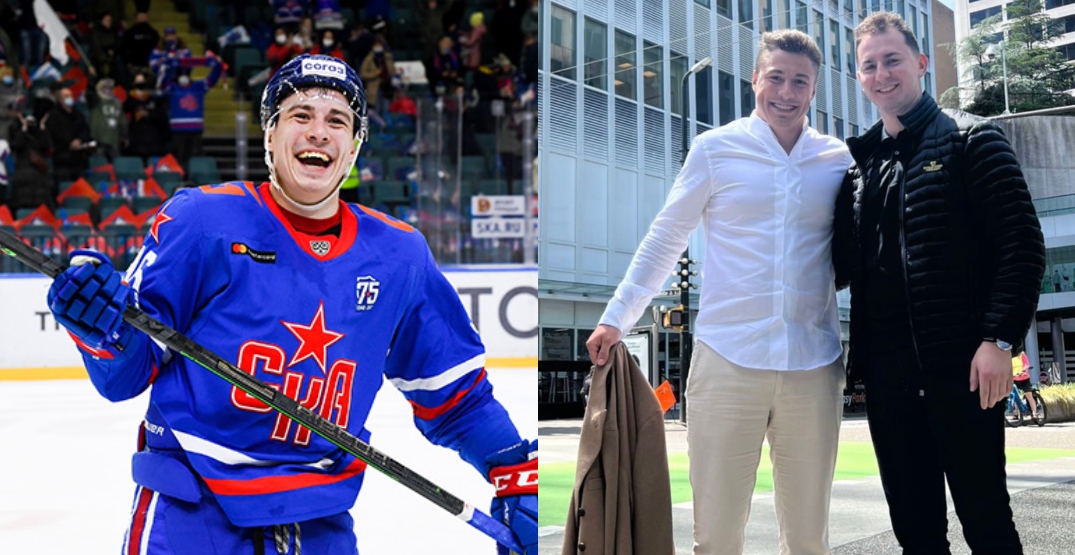 The sun was shining on Andrei Kuzmenko, who arrived in Vancouver on Thursday.

The 26-year-old Russian winger is the most highly-coveted free agent not currently in the NHL, and the Vancouver Canucks are a finalist for his services.

Kuzmenko has been touring North America, visiting with 4-5 teams according to CHEK’s Rick Dhaliwal. Vancouver is his last stop, with a decision expected next week according to Dhaliwal.

Kuzmenko, along with agents Dan Milstein and Vlad Spektor were spotted at Blue Water Cafe in Yaletown Thursday, and will surely be wined and dined at another Aquilini-owned restaurant tonight.

Kuzmenko has been spotted in Edmonton, Detroit, Miami, and Vegas since first arriving in Los Angeles from Russia last week.

The Oilers apparently met with Kuzmenko at Joey Restaurant in Edmonton.

Holland out for lunch at Joeys with Woodcroft. Contract negotiations possibly? 👀🔍 pic.twitter.com/qX1nAITGiy

It remains to be seen if Kuzmenko will sign with the Canucks, who can likely guarantee him a top-nine role, if not a top-six role in their lineup right away. Kuzmenko scored 53 points in 45 games last season, which ranked him second in KHL scoring.

Jim Rutherford and Patrik Allvin have a great relationship with Kuzmenko’s agent, according to Dhaliwal, and have liked Kuzmenko since back in their Pittsburgh days.

Will that be enough to close the deal? We shall soon find out.

"The tour is going to end here, folks. After Vancouver, there are no more interviews. We are expecting a decision next week."@DhaliwalSports on Kuzmenko watch. #Canucks @VanMortgage