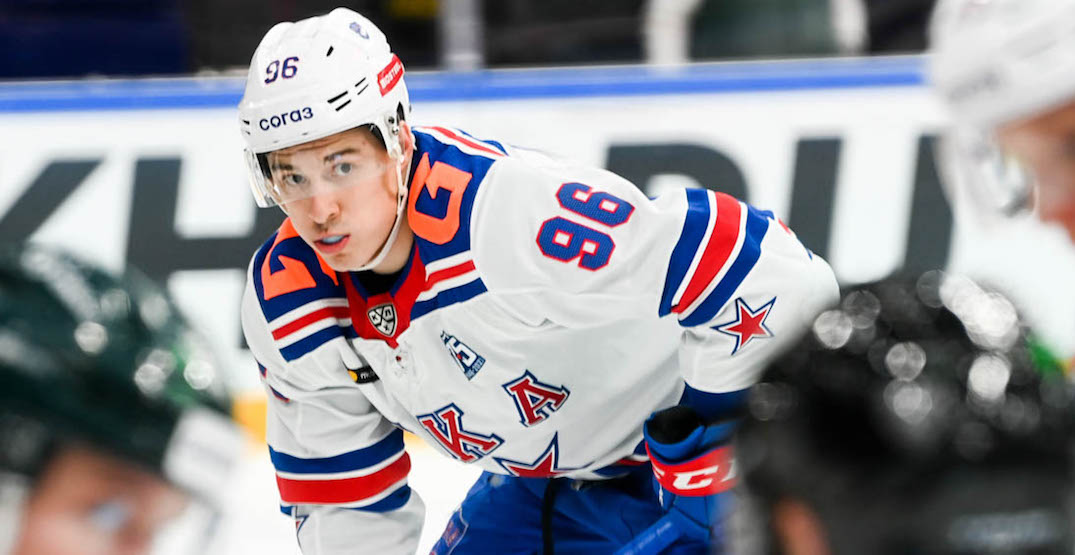 Seemingly every other year, a big-name free agent from the Russian-based KHL makes the leap to hockey’s pinnacle-league, the NHL, in hopes to translate their game into a more lucrative career trajectory.

While results have varied ‌over the past 10 years for these players, the chance of acquiring an asset that might contribute right away is a hard proposition to pass up for many teams.

Kuzmenko, a 26-year-old winger, was second in KHL scoring; a feature act for the St. Petersburg-based team, SKA. The Yakutsk native was well over a point-per-game with 53 points in 45 games played, this all culminating in his eighth KHL season.

As the 5-foot-11, 194-pound forward continues his process of examining potential suitors, the Vancouver Canucks have emerged as one of the frontrunners for his services.

The Canucks’ hard-pressed effort to sign Kuzmenko can provide us with a window into what the team is looking for in terms of roster construction, playing-style, and what they ultimately value in the player.

Do the #Canucks need to get faster? What is their identity right now?

Canucks GM Patrik Allvin has gone on record, throughout multiple media appearances, about the need to expand team-speed and skill. It’s not surprising that when examining Kuzmenko’s game, those attributes rise to the top.

Kuzmenko’s game in transition, in simple terms, is fast. His pace of play, execution speed, and decision-making north-to-south directly correlated to faster and more efficient play for SKA this season.

The dimension that makes Kuzmenko interesting is the skill blending and delay game he employs to maximize his puck possessions. The Russian winger does an excellent job protecting the puck in hip-pocket, all while executing punch-turns and stop-ups to freeze gapped up defenders, all while looking for trailing teammates who activate up the centre lane.

Even when Kuzmenko is the primary shooter on the rush, the details permeate. He looks for give-and-go activations, allowing him to crash high-danger areas like the crease, and he has an inside-leg wrister that adds deception to his release, and he makes a point to take outside-to-inside routes, funnelling the puck into the middle of the ice.

In sustained pressure, Kuzmenko’s penchant for working off the walls to create better shooting opportunities in the slot represent his best offensive zone habits. He looks for open lanes to burst through, and has the patience to hold onto the puck, handling laterally until he finds an open shooting lane.

Even as a playmaker, the former SKA winger uses motion to find open lanes to teammates, through an overwhelming four-way mobility.  He can even layer passes cross-ice to stretch out defensive schemes, showing some manipulation ability. Kuzmenko can be inefficient at times, throwing pucks away — part of this is due to him playing too fast.

On the flip side, Kuzmenko’s production this year has some caveats. He creates an inordinate amount of offence from behind the net, usually in the form of wrap-around chances. This is so prevalent that when you look at his shooting opportunities this season, there is no other place on the ice where he directs pucks on the net more.

What makes these plays interesting is that they almost always follow the same formula. He retrieves the puck below the goal line or wall, waits for a defender to drift into his vicinity, and then cuts hard against the grain to attack into the blue paint.

Kuzmenko is a regular Pascal Siakum, a forward for the Toronto Raptors who is known for his spin-off moves. Even his playmaking out of these activations are questionable ‌often resulting in hope passes to backdoor teammates that just aren’t there.

While these sequences are eye-popping, there are translatability concerns. NHL defenders are bigger, guard the crease much more viciously, and are much better at putting a stop to end-board cycle plays. He won’t be able to bait aggression as much either.

Kuzmenko’s game is also lacking on the defensive end of the ice. While he does possess scanning habits, allowing him to be proactive, Kuzmenko is very uninvolved in terms of creating stops. He’s a top of the circle player, blowing the zone early, hoping his teammates win 50/50 battles to string pucks forward.

Kuzmenko will occasionally work hard on the backcheck to help angle off transitional attackers, but ‌he doesn’t push pressure enough, and can become scattered on broken plays where he is expected to get back into the fray. So much offence in the NHL is based on counter-attacking, and if Kuzmenko can’t contribute to stops, it will limit his volume of puck touches.

What does this mean for the Canucks?

The elements of a delay game, along with Kuzmenko’s ability to work off the walls and into the middle of the ice should lead to some production at the NHL level. The overarching worry is that in a results-based league like the NHL, he might not ‌develop enough defensive trust, or even create enough offence to offset it.

While Kuzmenko could be a top-six forward option for Vancouver, he profiles as more of a top-nine player who might specialize on a power play unit or add scoring depth in case of injury. Nevertheless, that’s not too bad for a player without an acquisition cost.

While Kuzmenko is a mixed-bag of translatable skills and habits, it’s clear that when looking at his game, a player of his style would have fit nicely into the high-flying 2016 and 2017 Stanley Cup-winning Pittsburgh Penguins teams; a fast north-to-south winger who pushes skill and deception. Along with his age, this ultimately might be an archetype for future additions to the Canucks’ forward core, regardless if it is Kuzmenko or not.