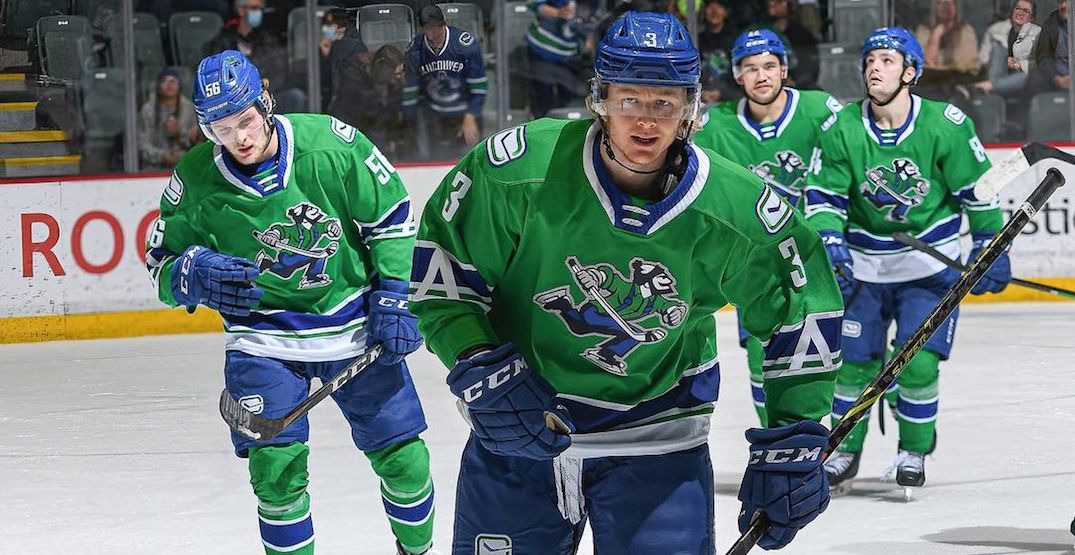 Although the Vancouver Canucks remain in the playoff race, management’s intentions became clear at the trade deadline.

This team has an eye on the future.

Those intentions became clear after trading away Travis Hamonic and Tyler Motte for futures before Monday’s deadline.

Trading Motte, in particular, was telling. Although he was a pending UFA, the Canucks could have chosen to keep them as their own rental – like the Dallas Stars did with John Klingberg – if they truly believed they were in the race.

Even if the Canucks string together some wins and continue to push for a playoff spot, it might be worth calling up any of these four guys to see what kind of impact they can make.

Let’s start with the most obvious candidate on the list.

Jack Rathbone has been downright dominant offensively in the AHL this season when he’s been in the lineup. In 25 games, the dynamic defenceman has 25 points.

Over the last 30 years, only seven U23 defencemen in the AHL have maintained a point-per-game average over a minimum of 20 games played, including players such as Justin Schultz, Oliver Ekman-Larsson, and Sergei Zubov.

Rathbone does still have some work to on the defensive side of the puck, but his skills on offence and in transition are NHL-ready.

His season has been sidetracked by injuries and COVID-19 related absences, so there is merit to keeping him in Abbotsford. However, Canucks’ general manager Patrik Allvin said post-deadline that he expects Rathbone to fight for NHL games down the stretch.

“Definitely Rathbone and Lockwood, I hope they’re going to be ready to fight for some games and get a chance to show us what they have,” Allvin said during his post-trade deadline media availability.

“They’ve been taking steps down in Abbotsford and Abbotsford has been playing good hockey with them in leading roles here, so hopefully we get a chance to see them up here.”

According to a report from Thomas Drance of The Athletic, this one’s already in the works.

Aside from Rathbone, Will Lockwood was the other player mentioned by Allvin in the press conference in terms of who he wants to see fight for NHL games later this season.

Lockwood got a brief two-game cup of coffee towards the end of last season’s disaster. He didn’t look out of place thanks to his speed and tenacity on the forecheck.

One reason why it’s easy to envision Lockwood in the Canucks lineup is because of Motte’s departure.

The two share a lot of similarities in the way they play the game. As Daily Hive’s Daniel Gee pointed out recently, Lockwood’s profile of a “devastatingly physical puck retriever” is perfect for a bottom-six checking role.

Their scoring profile at the AHL is also similar. Motte averaged 0.65 points per game during his last full season down there as a 22-year-old. Lockwood is averaging 0.6 points per game as a 23-year-old, with nine goals and 24 points in 45 games this season.

He’s also been trusted as one of Abbotsford’s penalty-killing forwards, averaging over two minutes of ice time per game shorthanded, according to tracking by Cody Severtson of AHL Nucks Harvest.

Now, Spencer Martin’s inclusion here is contingent on the Canucks falling further out of the race.

Aside from that though, he’s more than earned an opportunity for more NHL starts.

After quietly coming over from the Tampa Bay Lightning in the offseason for “future considerations,” Martin has gone from fifth to as high as second overall on the Canucks goalie depth chart.

While Jaroslav Halak is still the incumbent back-up – and he’s played better than most want to give him credit for – Martin has nonetheless been lights out all season long.

The Oakville, Ontario native has a spectacular .958 save percentage, along with a 1.59 goals against average in three NHL games with the Canucks (1-0-2).

Because of Halak’s bonus overage of $1.25 million to $1.5 million, coupled with Braden Holtby’s $1.9 million on the Canucks books next season thanks to his buyout, Vancouver will likely have to roster a cheap backup next season.

Based on Martin’s career resurgence, he seems like the perfect candidate for that role. And, if that’s truly the case, why not give him a couple more NHL starts to see if he can grow his confidence and prove that he’s worthy of full-time backup duty.

The 27-year-old Philip Di Guiseppe was a top call-up candidate before breaking a bone last week. He’s now reportedly out for multiple weeks.

If he does heal up before the end of the regular season, he’s someone the Canucks should look at calling up.

I don't think people understand how hungry Di Giuseppe is for the NHL.

I've talked with him a lot this season. He wants to prove himself.

Di Guiseppe has been nearly a point-per-game player down in Abbotsford this season with 35 points in 38 games. More importantly, he’s continued to showcase his two-way play and penalty killing ability for the baby Canucks.

Remember in the preseason with Di Guiseppe and Jason Dickinson looked together both at even-strength and in a penalty killing role? If the Canucks do fall out of the chase, it might be worth seeing if Di Guiseppe can showcase a similar kind of effectiveness in actual regular season play.