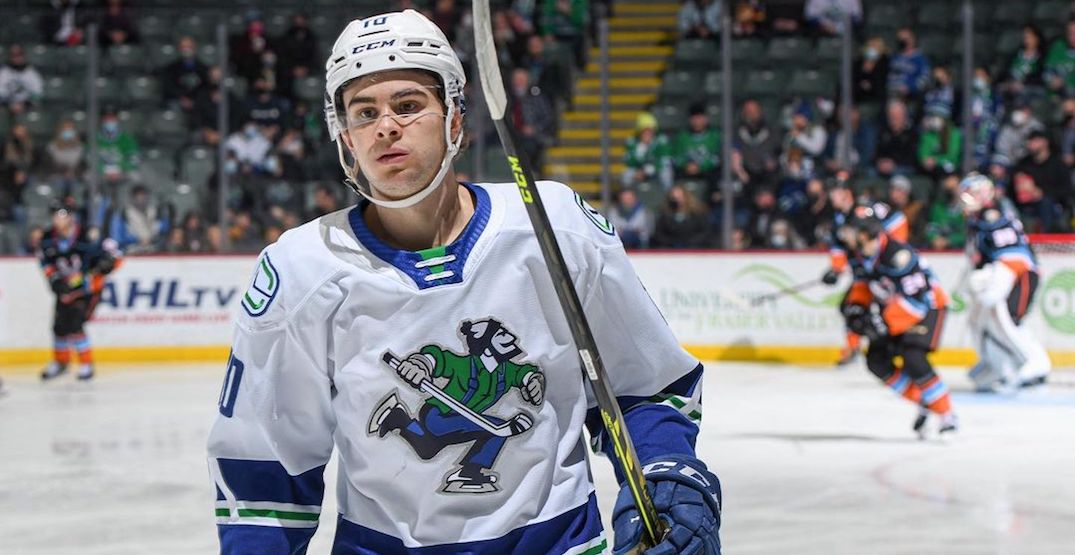 Six years ago, the Vancouver Canucks went spelunking into the gold mine that is the US National U18 Team and selected forward Will Lockwood in the third round of the 2016 draft.

Known for his high-pace, hard-checking game, Lockwood went on to have a productive but injury-plagued stint on the University of Michigan, a team that he would end up captaining in his senior year.

Present day, the Michigan-born winger is proving his mettle on the Abbotsford Canucks, trying to build upon a brief, two-game appearance in the NHL last year. At this point in time, the 23-year-old is one of the longest-tenured pieces of Canucks property with under five NHL games played.

With many fans calling for Lockwood to get another look on Vancouver’s roster, it just makes sense to dig into the feisty wingers game.

Bouncing between the bottom- and top-six in his recent games, Lockwood has amassed 21 points in 35 games this season, good for 0.60 points-per-game. This is all while averaging just over 15 minutes of ice-time per game, per Cody Severtson at AHL ‘Nucks Harvest.

Above you will see that Lockwood actually lines up pretty closely with Vancouver cohorts who have been through the AHL in the recent years. You will also notice that many of the players above aren’t exactly world-beaters.

While this can give some indication of where Lockwood may be at, the various levels of context muddies the waters. In the most simplistic evaluation, Lockwood’s ceiling profiles as a bottom-six contributor.

How does he potentially fit in?

One of the more remarkable stories of Vancouver’s 2021-22 season has been the emergence of the Juho Lammikko, Tyler Motte, and Matthew Highmore line. As a unit, they execute Bruce Boudreau’s 2-1-2 offensive zone forecheck near perfectly to create offence, all while providing penalty-killing value.

The thing is, each player represents as a trade chip that the Canucks could capitalize on, no more than fellow University of Michigan alum, and pending UFA, Tyler Motte.

Luckily, Lockwood’s play this season suggests he is being primed for a role in this system, and it all starts with his puck retrievals.

The 5-foot-11, 185-pound winger, is a devastatingly physical puck-retriever who relies on pace to jump on slow reacting AHL defenders, creating havoc below the goal line. His motor, battle level, and at times, his body positioning are high-end, even when considering he is a bit undersized.

Lockwood’s scanning habits could be better, but he legitimately creates more possession time.

From there, Lockwood’s game is a bit simple. He typically exploits his mobility on-puck to work around the perimeter of the ice (much of the time in exaggerated loops). Off-puck, the right-winger patterns into net-crashing activations, looking for rebounds or open passing lanes.

He relies on cut-backs to shake off attackers, looks to execute give-and-gos, can work pucks against the grain to avoid upcoming pressure, but in general, he needs movement and open lanes to work pucks into the slot consistently — space that is ill-afforded in the NHL.

Lockwood’s shooting decisions are also simplistic. If he’s not within five-feet of the net, most of his attempts are reactionary, mainly looking to create rebounds. He can suffer in static situations to find space, like in the bumper-spot on the power play, where movement is limited.

Mechanically, his shot isn’t terrible, but he rarely beats goaltenders cleanly at the AHL level due shot location and placement issues.

Does being fast equal being good transitionally?

While Lockwood’s ability to separate is an impressive plus-skill and he can beat defenders one-on-one, he often possesses a high level of tunnel vision, works into heavy amounts of pressure too often, and is a singular pace player.

The former third-round pick will often execute weight-shifts, protect the puck in his hip-pocket, only to hold the puck directly in front of him, eliminating any semblance of puck-protection.

He’s a more dangerous threat off-puck, when he can match the puck carrier’s speed and set his stick.

When Lockwood passes off the rush (breaking through the tunnel vision), he tends to throw pucks away because of missed scans.

But offence is just a part of Lockwood’s make-up.

The Abbotsford Canuck winger is a very proactive defender due to consistent scanning; he reads the developing play well enough to disrupt passes and occupy shots lanes, and his motor pushes pressure on defenders. Lockwood processes the AHL game fast enough to show some real potential at the NHL level.

Even in transition and on the PK, Lockwood is a dedicated backchecker who flashes his speed to help angle off attackers, eliminate secondary threats, and disrupt entries.

Former Canuck Jannik Hansen has stressed the importance of learning to penalty kill in the AHL and that’s what is happening here. He is actually pushing 2:04 seconds of penalty killing per game according to Severtson’s tracking — he’s getting the reps.

With all things considered, it’s hard to say what will happen to Lockwood’s game when his speed advantage is lost in the NHL —  a league where everyone plays fast. Does his opportunistic scoring completely disappear? The limitations offensively could become a barrier.

But overall, it’s clear that his makeup and development path as an energy-first, checking winger that can kill penalties could fit a potential future need for the team. He needs to get stronger and continue to develop his defensive game to carve out a niche, but ‌he is someone who has at least some potential to contribute.