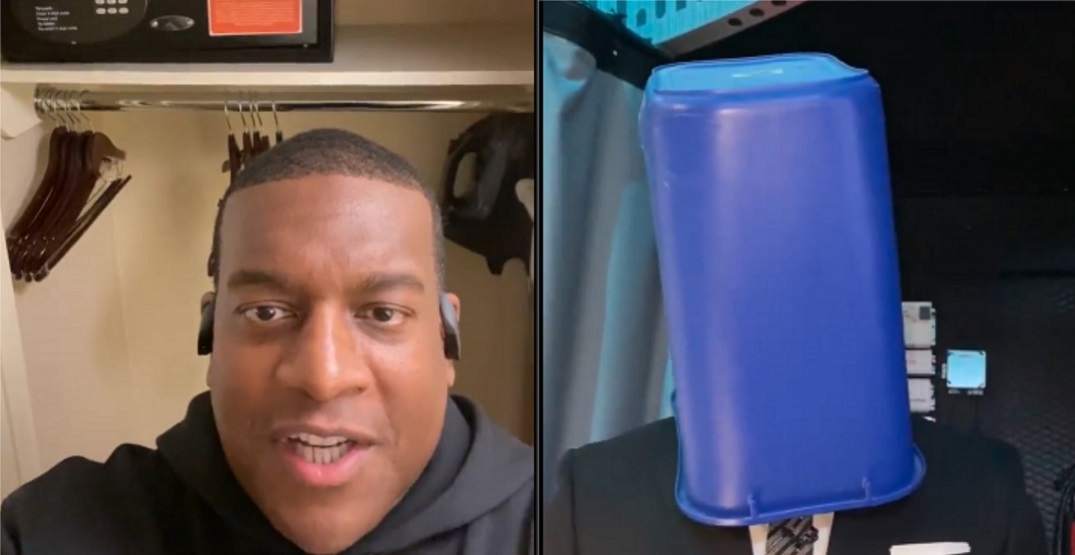 For the last two weeks, hockey insider Kevin Weekes has been at the forefront of NHL trade discussions.

But it’s not necessarily the magnitude of the trades that has caught people’s eye: it’s how Weekes has been breaking them.

Working for NHL Network as well as ESPN, Weekes has posted trade news via social media video from a whole whack of locations: in front of a bamboo wall at the spa, on the side of the highway, in a hotel room closet, and perhaps most notoriously, with a recycling bin placed on his head.

For Weekes, it’s all about having a bit of fun with his job.

“I wanted to do something that was authentic,” Weekes said in an interview with Daily Hive about the videos. “It’s about the players, and our amazing fans and elevating our sport to a place that it deserves to be. So this is just another way of doing that.”

Weekes, who retired from the NHL in 2009 after an 11-season career, first posted a selfie-video on March 14 about the trade that sent defenceman Josh Manson to the Anaheim Ducks.

For him, the idea to post the first video came out as “really spontaneous.”

“I’d just come off the air,” Weekes explained. “I’m in the parking lot. I’m behind the truck.  So, what am I going to do? Race back in there and run into the studio and upset the show that was going on that was in progress? No. So, I was like, ‘Okay, well, let me get this out.'”

Weekes said that the response to his video taken while he was at the spa of the Robert Hagg trade to Florida on Sunday helped him think about new creative possibilities with the format.

**Breaking News** As was first reported to happen by @frank_seravalli , @FlaPanthers are trading for D Man Robert Hagg from @BuffaloSabres for a 6th Rd Pick in 2022. @espn @NHLNetwork #HockeyTwitter pic.twitter.com/4zx5NOFEe0

“That’s when I noticed that people were starting to have fun with them and they’re enjoying them,” Weekes said.

With the NHL trade deadline happening this past Monday, Weekes’ new bit was in full swing.

Weekes said the 20-plus videos have picked up “north of 10 million impressions” on Twitter.

“Ultimately it’s about amplifying our sport. I’m always about amplifying the game and bringing the game to the next level,” he said. “When you earn the right as a player and now as a broadcaster to be able to influence… that is something that I take seriously, but I have a lot of fun with at the same time.”

For many fans, getting the Weekes video after a trade has already become a ritual, with many memes and jokes spawning off each new location.

me: what are you doing in my house

kevin weekes: there’s been a trade

hey there hockey fans it's your boy kevin weekes reporting directly from the matrix pic.twitter.com/7mtqyw6WDM

"hey nhl fans! kevin weekes here, hope you're having a great day, here to announce yet ANOTHER trade as we approach the trade deadline" pic.twitter.com/pa7W2cN6rW

As for how long he’ll keep up the video format, Weekes said he’s looking to “continue bringing fans content bringing the behind the scenes and being as creative as possible.”