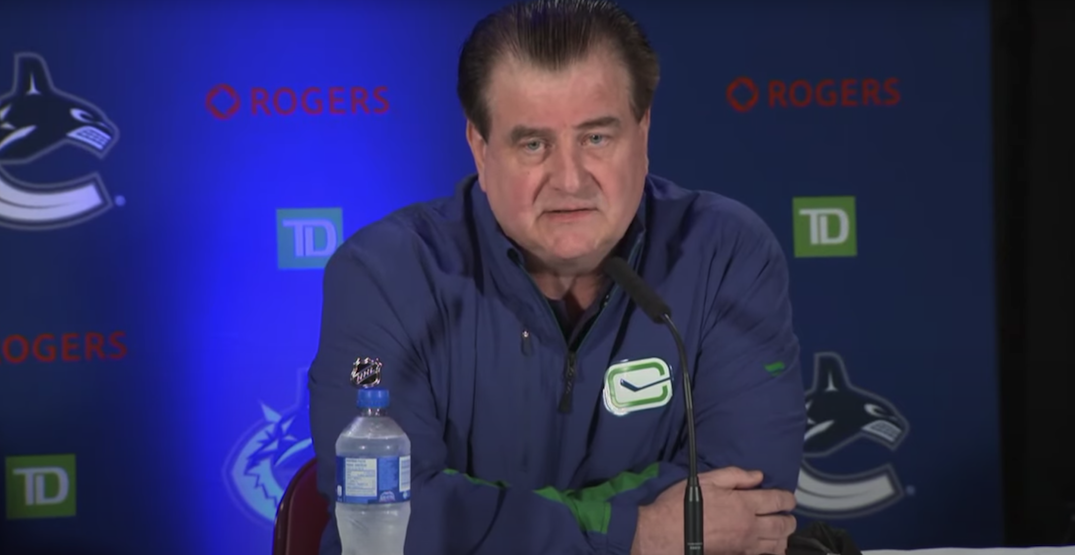 Vancouver Canucks players reported to Rogers Arena this morning for the first day of training camp, which included off-ice testing and the first in-person media availability in over a year and a half.

Snagged myself one of the Orca Bay chairs 😍 pic.twitter.com/WLoM08I1ci

Not everyone was present, however.

At least seven Canucks players were missing, for various reasons.

Elias Pettersson and Quinn Hughes are still unsigned, so their absences were no surprise.

“I don’t think we’re that far apart,” GM Jim Benning said about contract negotiations, giving hope that both star players could be back soon.

Tyler Motte, on the other hand, sounds like he’ll not only miss training camp, but likely the start of the regular season too. Motte is rehabbing an upper body injury that required surgery this summer, Benning confirmed. He doesn’t know when he’ll be ready to rejoin the team.

A pair of surprise absences from the first day of camp included Brandon Sutter and Travis Hamonic.

Sutter is undergoing tests, Benning said, and the team isn’t quite sure what’s wrong with him — though he did test negative for COVID-19.

“Sutts has been dealing with some fatigue,” said Benning. “He’s been doing some tests. We’re not really sure what that is yet. He might not be available to start [on-ice sessions tomorrow].”

Travis Hamonic is on the Canucks training camp roster, however it’s my understanding that he is not currently in Vancouver and it’s not injury related.

Hamonic’s absence was rumoured to be related to COVID protocols. Benning was tightlipped as to the reason he wasn’t in camp, saying only “Hamonic will be here.”

There have been issues around the league with unvaccinated players. The Columbus Blue Jackets cut Zac Rinaldo because he was unvaccinated, and Tyler Bertuzzi won’t be able to suit up for the Detroit Red Wings when they play games in Canada because he would need to quarantine.

The Canucks, thankfully, don’t sound like they’ll have the same headache.

“Our organization will be 100% vaccinated by the first game of the season. We have a strict policy in place also,” said Benning.

“What we went through last year as a team was really hard. It wasn’t just hard on the players, but their families too. A lot of these guys have young kids, they all ended up getting sick. As a group, they knew the importance of getting vaccinated and to give ourselves the best chance to get back to normal. There wasn’t too many guys that didn’t want to get vaccinated.”

Justin Bailey tried to come to camp, but wasn’t allowed across the border, as he tested positive for COVID-19. He’s staying in Buffalo for another 10 days, Benning said, and will join the team assuming he tests negative.

Also missing on Day 1 was Bo Horvat, who stayed home because he was sick. Canucks PR said that was just a precautionary measure, however.

#Canucks announce the 54-player roster for the club's 2021-22 Training Camp presented by @TD_Canada.

Players will hit the ice together for the first time tomorrow at the Abbotsford Centre, as Travis Green gets his first chance to whip the team into shape. The Canucks’ first preseason game is on Sunday against the Seattle Kraken in Spokane, Washington. The game isn’t televised, though the Canucks are hopeful they can have a livestream available for fans to watch.