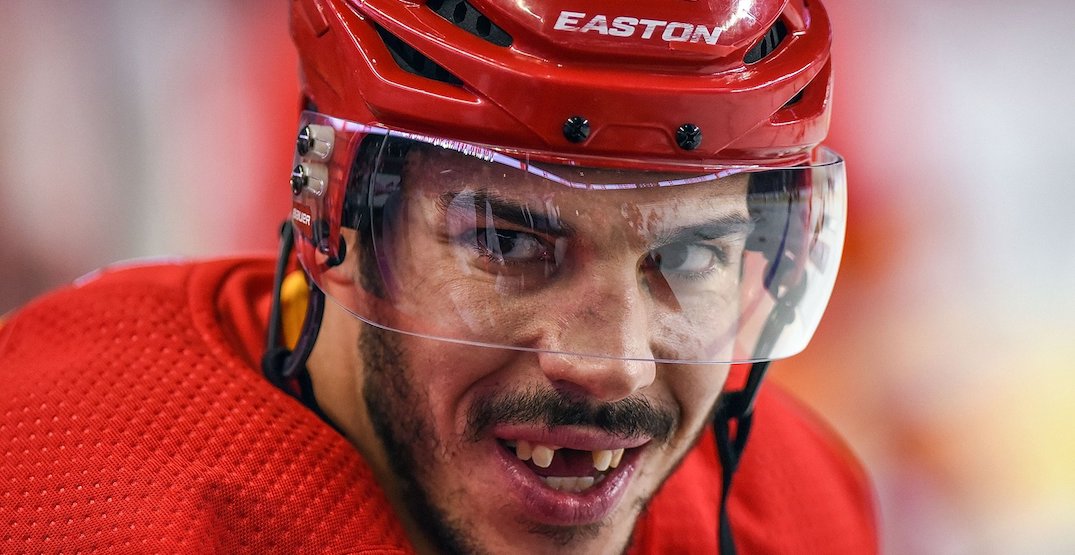 If they can clear cap space, it appears the Vancouver Canucks are in the market for another defenceman.

TSN 1040’s Bob Marjanovich is reporting that the Canucks are interested in Travis Hamonic, the 30-year-old free agent defenceman who played the final three seasons with the Calgary Flames.

“Travis Green is really making a case to management to try to get another defenceman in,” Marjanovich said today during the first hour of Donnie & The Moj. “The guy that I think he would like to see come to Vancouver is Hamonic. Now clearly the team still has cap issues… we’ll see if they can put Ferland on long term IR… I’m hearing that Calgary and Vancouver are in on Hamonic, and whoever can clear enough space — the Flames are trying to make room as well — probably wind up getting Hamonic on a one-year deal.”

A right-shot stay-at-home defenceman, Hamonic seemed like a natural fit for the Canucks as a Chris Tanev replacement in free agency. Indeed, the team had interest in him back in October according to TSN 1040’s Rick Dhaliwal, and the feeling was mutual according to Sportsnet’s Elliotte Friedman.

But when the Canucks traded for Nate Schmidt and his $5.95 million contract, that appeared to put an end to the rumours.

Following the Schmidt signing, Sportsnet 650’s Satiar Shah reported that the Canucks were still interested in Hamonic, provided if he was willing to accept a cheap, short-term deal.

If the price makes sense short term, Canucks could try to sign Hamonic

The Canucks are currently $1.5 million over the salary cap according to CapFriendly.com, but there remains the possibility that Micheal Ferland begins the season on long term injury reserve. If Ferland can’t play, that would save $3.5 million off the cap. The Flames, by contrast, have just over a million dollars in cap space according to CapFriendly.

In an interview with Sportsnet 650 earlier this month, Benning didn’t sound confident about Ferland’s hockey-playing future.

“He’s dealing with our doctors,” Benning told hosts James Cybulski and Perry Solkowski. “If the season was to start right now, he wouldn’t be starting. But he’s continuing to work through the issues he has. Right now, we’re just hoping that he feels better so that he can continue on with his life. We’ll see where he gets to if he’s going to be ready to play again or not.”

Hamonic was never an offensive force, but he did score a career-high 33 points from the back end with the New York Islanders in 2014-15. His offensive numbers have dried up in recent years, though he hasn’t been given significant power play time since joining the Flames in 2017.

Hamonic scored 12 points (3-9-12) in 50 games for Calgary last season, and was fifth among Flames regulars on the back end in Corsi-for percentage (49.19%). He was second in average ice time (21:12) among Flames blueliners, playing most of his minutes on a pairing with Noah Hanifin. The 6-foot-2, 205-pound defenceman also led all Flames players in average time on ice on the penalty kill (3:07).

He hasn’t played a game since February 8 though, as Hamonic missed games due to injury and opted out of the NHL playoffs due to health concerns with his daughter.

The St. Malo, Manitoba native was traded by the Islanders in part because of a desire to play in Western Canada, so there may be incentive for Hamonic to take less to remain north of the border. Given that the Canada-US border is still closed, signing with an American team could mean being away from home for the entire season.

Just how much of a pay cut Hamonic is willing to take remains to be seen. He’s coming off a seven-year, $27 million contract, and was scheduled to earn $4.875 million in total salary last year.

Hamonic would fit a need for the Canucks, who currently have a lot of question marks pencilled in on their third pairing. Jordie Benn, who was a healthy scratch on a regular basis by head coach Travis Green last season, has one spot, while unproven defencemen like Olli Juolevi, Jack Rathbone, Brogan Rafferty, and Jalen Chatfield are in the running for the other.

The Canucks could use a defenceman that they can rely on to kill penalties and provide a physical edge. Hamonic would also instantly solidify a third pairing, or potentially provide balance paired with Quinn Hughes or Alex Elder.