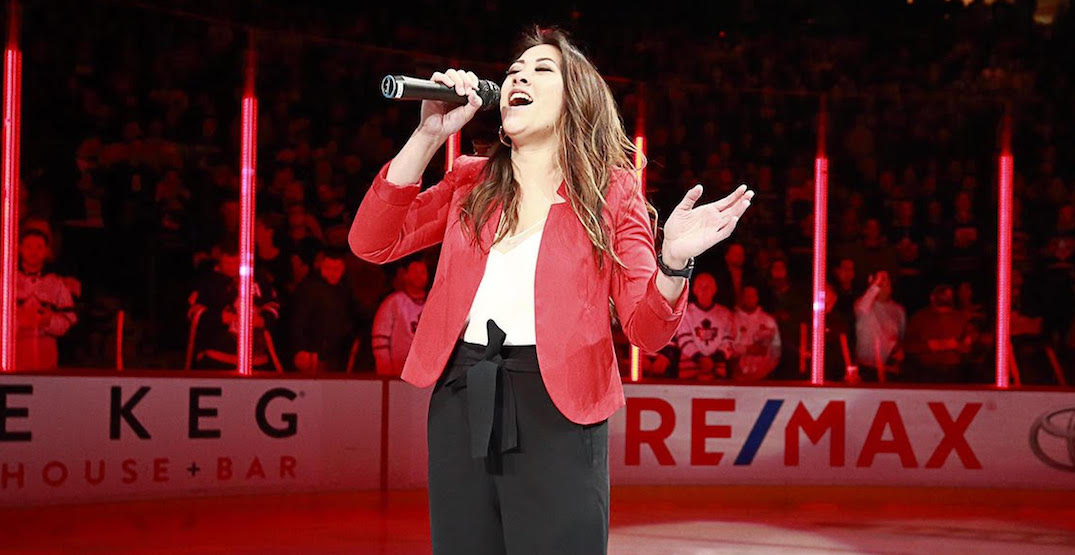 Major newspapers in the United States reported on it, and naturally Don Cherry also weighed in on the subject.

And it’s easy to understand why. Donnelly, a beloved figure in the city for many, managed to completely tarnish his reputation by performing and speaking at an anti-mask rally.

It angered many, with numerous Canucks fans blasting the longtime anthem singer on social media. This has also brought out the vocal minority of anti-maskers from all over the continent to weigh in, spreading conspiracy theories that are potentially dangerous to public health.

But through all of the anger and hate, it didn’t take long for Canucks fans to anoint a new top anthem singer, as Marie Hui has seen in her notifications on social media of late.

@fr_aquilini and @Canucks should hire @mariehui full time now. It’s way overdue. Not only is she’s a fan favourite but a solid human being!

Easiest decision the @Canucks could make this off season. @mariehui pic.twitter.com/jj6vBEO3cX

Let’s make it official, I’m all on Team @mariehui for being the main Canucks anthem singer.

i think we all know who can sing the anthem from now on yes?! @mariehui #canucks @Canucks

#Canucks fans, don’t fret about Mark Donnelly, we already have our mainstay anthem singer to begin with. Her name is @mariehui.

Please hire @mariehui to sing the anthem at all Canucks games

In a telephone interview with Daily Hive, Hui says she’s surprised and humbled by the outpouring of support.

“I’m loving all the love,” she said. “I had no idea so many people knew about me.”

It was a nice surprise for the local R&B singer and songwriter, whose singing career has been affected significantly by the pandemic.

Hui is no stranger to Vancouver sports fans, of course. She won a singing competition to become the Vancouver Whitecaps’ anthem singer before their first MLS season in 2011. She has sung the anthem before at countless events and competitions around town since and has even been asked to sing O Canada at Seattle Seahawks games on multiple occasions.

You may also recognize her from numerous Canucks parody songs in collaboration with Clay Imoo.

Hui has become a semi-regular at Canucks games too, since performing on the red carpet at Rogers Arena for the first time in 2013.

“The outpouring of love is very humbling for me… I hope it turns into something positive, but I also know that the Canucks do ask a lot of people to sing during the season… so it’s not like an exclusive job.”

While Donnelly was synonymous with the Canucks for nearly two decades, as we reported yesterday, he was already being phased out by the team. Indeed it was Hui, not Donnelly, who was asked to sing the national anthem for pre-recorded performances played during the playoffs in the Edmonton bubble last summer.

Well done, @Canucks. We fought hard. Thanks for allowing me to be part of your home game experience. Even though the team and this city won’t be hoisting the cup, I’ve placed an anthem trophy in my own case. #canucks pic.twitter.com/GvD87Idwj5

The two singers are polar opposites in many ways, and that includes their views on public health.

The anthem singer position is more of a title than a job, as many performers do it on a volunteer basis. But if the Canucks are looking for someone new to become synonymous with the team, Hui’s squeaky-clean image and positive voice on social media make her a logical choice.

Walking the blue carpet tomorrow night at @RogersArena to sing the anthems for the @Canucks game vs the @PredsNHL. Come to the arena early or catch me on tv! #canucks pic.twitter.com/8oJXg9MxWo

For now, Hui isn’t expecting anything, when pressed for her interest in becoming the team’s new top singer, she admitted “it would be nice.”