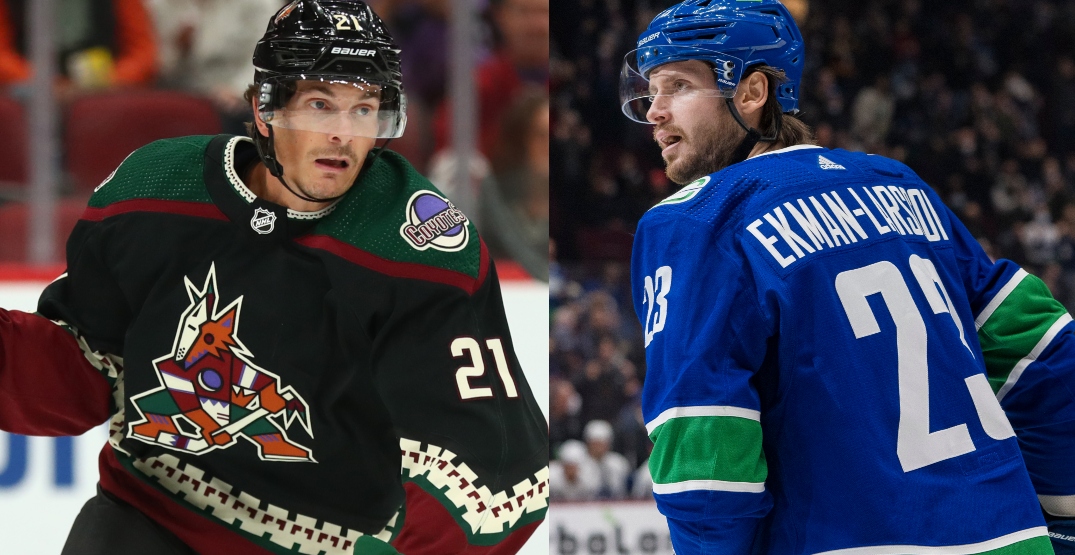 It was one of the biggest trades in Vancouver Canucks history.

Jim Benning sent shockwaves through Canucks Nation when he pulled the trigger on a blockbuster trade with the Arizona Coyotes last summer. Five players changed teams, along with three draft picks and a whole lot of money.

The Canucks got immediately better in the near term, acquiring former All-Star defenceman Oliver Ekman-Larsson and a top-six forward in Conor Garland.

But they paid a stiff price.

Though the Coyotes retained part of Ekman-Larsson’s salary, the Canucks are on the hook for $7.26 million per season until the 30-year-old’s contract expires in 2027. Vancouver also gave up three draft picks, including the ninth overall pick in last year’s draft, a second-round pick this year, and a seventh-rounder next year.

It was an all-in type move to push the Canucks into the playoffs.

But as the Canucks get set to enter the final month of the season, a postseason berth is a long shot.

Ekman-Larsson has been good, but not great, for the Canucks, playing the most minutes (22:22) among defencemen after Quinn Hughes. He’s been counted on in a matchup role and the second unit power play, though he’s on pace for his worst offensive season (0.30 points per game) since his rookie season 11 years ago.

He’s a good player, but is he worth over $7 million? And how is that contract going to look as he gets older?

Though Garland leads the Canucks in points per 60 minutes (2.25), he has fewer points per game (0.56) than he had in either of his last two seasons with the Coyotes, and he’s unlikely to reach the 20-goal plateau.

Benning was fired back in December, of course, and the new regime has been clear in its objectives. They need to clear cap space, and they want more draft picks.

Without a doubt, they’d be a heck of a lot closer to achieving those goals had the Canucks never made the shortsighted trade in the first place. Perhaps Jim Rutherford and Patrik Allvin would like a do-over on this Benning trade.

Without OEL and Garland, the Canucks would have struggled mightily this season. But does that really matter if they’re going to miss the playoffs anyway?

Had the Canucks held on for one more year, their outlook this summer would have been completely different.

The contracts for Eriksson, Beagle, and Roussel, as bad as they were, were set to expire after this season. That’s $12 million worth of cap space the Canucks would love to have this summer.

While young players like Vasily Podkolzin and Nils Höglander have made their NHL debuts in the last two seasons, the prospect cupboard was otherwise left bare by Benning. Vancouver hasn’t drafted in the first round in consecutive years for the first time in franchise history, so there’s not a whole lot in the pipeline.

The Coyotes used Vancouver’s pick to take Dylan Guenther ninth overall at last year’s draft. The 18-year-old winger was chosen for Canada’s team at the World Juniors and has 81 points (41-40-81) in 53 WHL games with the Edmonton Oil Kings this season. If he was in the Canucks’ organization, he’d be far and away their best prospect.

We don’t know who the Canucks would have chosen had they kept the ninth overall pick, but they would have had the option to take centre Cole Sillinger, who went two picks later to Columbus. Sillinger cracked the Blue Jackets’ lineup this season, and has 21 points (11-10-21) in 64 games as an 18-year-old — better than Podkolzin or Höglander this season.

Imagine if, at the trade deadline, the Canucks had been able to recoup the second- and seventh-round picks they lost to Arizona. The new management team would have been overjoyed.

The solution, as Daily Hive outlined last June, should have been patience and pain. After missing the playoffs in five of six years under Benning’s leadership, he wasn’t in a position to suggest another year of pain for the long-term benefit of the franchise. But in reality? It was a sunk-cost fallacy, and Benning pushed the Canucks further from what should be the team’s goal: the first Stanley Cup in the 52-year history of the franchise.

We’ll see how Ekman-Larsson ages because he’s not a player that will be easy to move in a trade. Garland, 26, could be moved, and he has been the subject of trade rumours in the last month. But they’re not getting a top 10 draft pick back for either player.

That ship has sailed, and it’s now up to the new management team, led by Rutherford and Allvin, to find a new path.

But for those of us that have witnessed multiple shipwrecks under the previous regime, as much as Ekman-Larsson and Garland are productive players, fans are left to wonder what if.