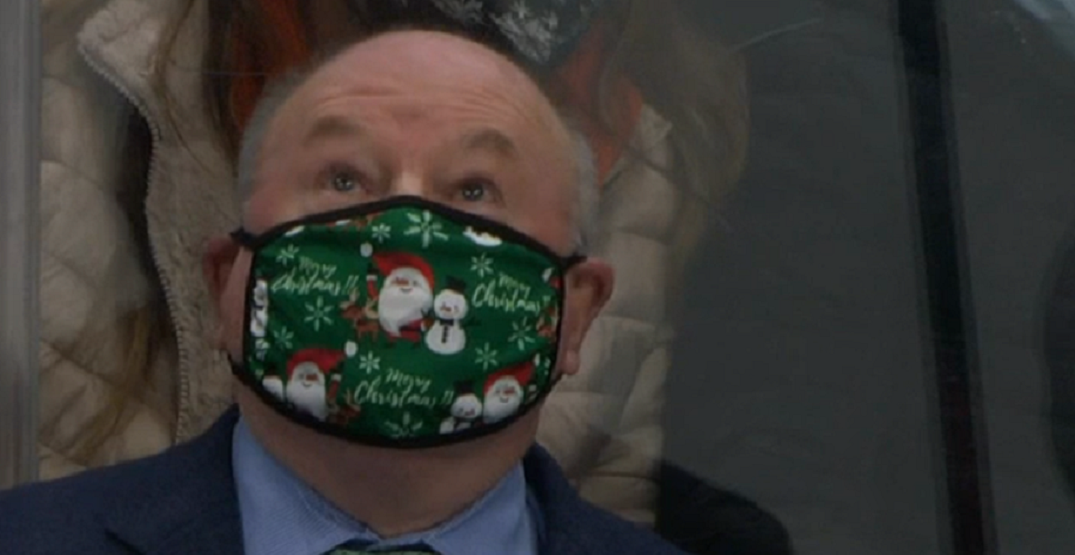 In his seventh win in as many games behind the Canucks bench, Vancouver head coach Bruce Boudreau found a new way to impress fans — his mask.

Despite the game being four days after Christmas, Boudreau was wearing a green, white, and red mask plastered with holiday symbols and a “Merry Christmas” greeting.”

“It’s the only one my wife gave me,” Boudreau joked postgame. “So I have to wear it.”

Wednesday’s game was a welcome return for the team, after having been off since December 16 due to COVID-19 cases within the team and around the league that had forced multiple schedule postponements.

Falling down 1-0 heading into the third period, the Canucks pulled off the come-from-behind 2-1 win by way of a JT Miller overtime goal.

And it may have just been the magic of the Christmas mask that helped them pull it off. Unsurprisingly, Canucks fans ate it up.

we can all agree this 7th consecutive win was the power of the holiday mask, right? #BruceThereItIs #canucks https://t.co/DAgoSs9yFx

It is December 29th. Bruce Boudreau is wearing a Christmas mask. If there's a reason not to like this man, I haven't found it yet.

I'll respect Boudreau twice as much if he's still wearing that Christmas mask in March. He's committed to this thing now, see it through, mate. #Canucks

I can’t stop cackling at Bruce Boudreau with that Christmas mask. It’s so perfect for him. Bruce is the best.

In his first month on the job, Boudreau has seen the Canucks go from a league afterthought to, well, the hottest team in hockey.

After starting the year 8-15-2, they’re now back at .500 after their win streak. With the win, Boudreau became just the sixth coach in NHL history to win his first seven games with a new team.

Whether it’s through personalized messages on Cameo, the now-infamous “Bruce, there it is!” chant, or just simply the team winning games again, it’s hard to find a negative with what Boudreau has brought to the table so far.

The Canucks are right back in action later today, travelling to go play the Los Angeles Kings in their first visit to the newly-renamed Crypto.com Arena. Puck drop is set for 7:30 pm, but there’s no clarity yet on what mask Boudreau will be sporting this evening.