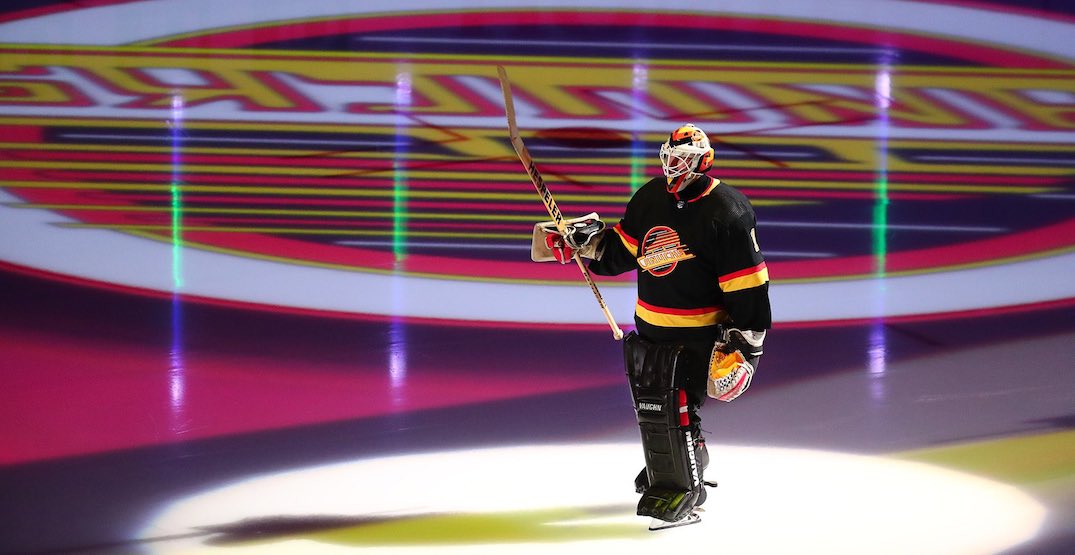 There hasn’t been a lot of good news for Vancouver Canucks fans lately, but this qualifies.

The Canucks are expected to wear their black Flying Skate jerseys at some point this season, though the team hasn’t formally announced anything yet.

“I’m a big fan of the skate jersey,” Bo Horvat said after practice, who added that Demko’s gear was an “exact replica” of McLean’s old gear.

“I thought it looked pretty sweet out there. It would even look better with a black jersey on.”

As we reported back in October, Adidas has begun producing the 1990’s retro jerseys with their new Primegreen material. According to sports jersey and logo expert Chris Creamer, that’s an indication that the team will rock their skate jerseys at some point this season.

The fact these are on Primegreen suggests the Canucks will be wearing them in 2021-22 https://t.co/zePXRgq2P9

Canucks goalies have worn retro gear for the skate jersey before, but never like this. The tribute mask is new, and Canucks goalies were previously required to wear predominantly white pads — with the thinking that white pads make it harder for shooters to see where openings are to score.

No Canucks goaltender is more associated with the 1990s than McLean, who showed off his legendary look during opening night in 2019 as part of the team’s 50th-anniversary celebrations.

First time back in #Canucks goalie gear since he retired 17 years ago. Thanks for the #tbt @1kirkmclean! pic.twitter.com/Qj8zvybUZV

McLean still ranks first all-time in games played (516) and playoff wins (34) by a Canucks goaltender. He’s one of seven current members of the Canucks Ring of Honour.