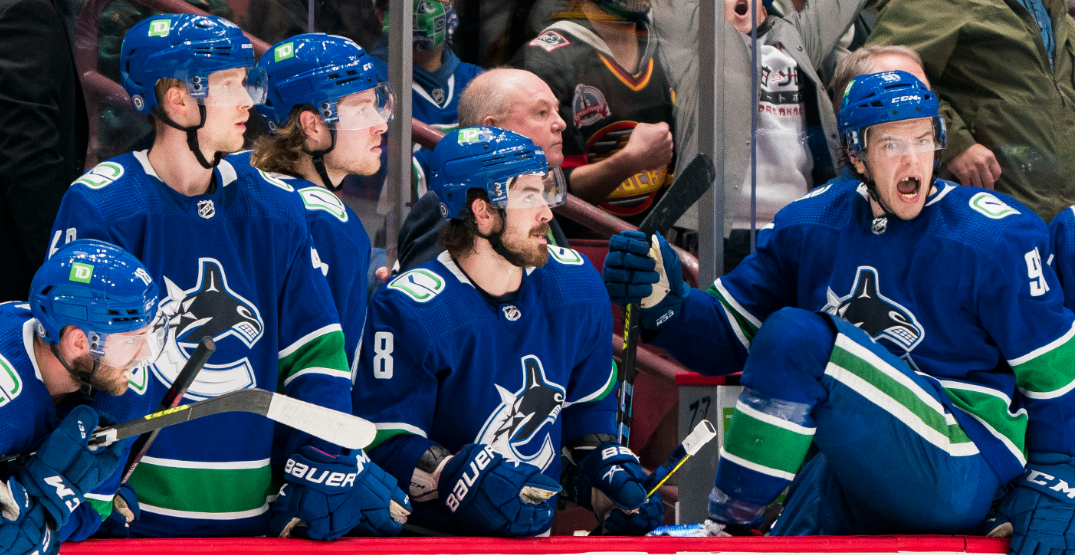 A COVID-19 outbreak has postponed the next two games for the Vancouver Canucks, but the symptoms suffered by players in protocol have been mild, according to the team’s president of hockey operations.

“I’ve talked to our players that are in protocol, talked directly to them, and they’re all telling me the same thing…that their symptoms are very mild,” Jim Rutherford said via Zoom on Saturday.

The team is awaiting results of additional testing this afternoon.

“As you know with these spreads, there’s usually one or two guys a day it seems,” he said. “That’s the way it’s going now. We’ll keep our fingers crossed and hope there’s not any more.”

Rutherford’s availability came after the league announced the postponement of the next two games, including Saturday against the Toronto Maple Leafs.

The Leafs also have four players in COVID protocol, including Jason Spezza and John Tavares.

“I was a little bit disappointed,” he said. “I know that a lot of people came from out of town for this game. I feel bad for those fans that made those arrangement.

“From a team point of view this was going to be a really good test for us. Every game is a test, but the Maple Leafs are one of the top teams in the league. We would’ve got a good look at how our team responded against them.

Rutherford said he isn’t aware whether or not Vancouver’s remaining two games prior to December 25 — Tuesday at the San Jose Sharks and Thursday at Rogers Arena against the Anaheim Ducks — would also be postponed.

A trip to San Jose would require a border crossing four days before Christmas.

“This hasn’t been under discussion with the league and the Canucks,” Rutherford said. “I’m sure this is all under discussion on a regular basis. I did ask that question to the league, and they said we want to get through the weekend now and will look at next week when the time comes.”

The Canucks are still able to practice.

Whether or not the team will continue to skate will be a decision made by coach Bruce Boudreau.

“These games are not cancelled. They’re postponed,” said Rutherford, who was hired December 9 after the team fired longtime general manager Jim Benning. “Hopefully we can play them at a later date, and we can proceed accordingly. We can practice if we want. I don’t know what Bruce will decide there, but we can have fairly normal activities except play the games.”

Vancouver is in the midst of a drastic season turnaround.

The Canucks are 6-0-0 since hiring Boudreau on December 6 after starting the season 8-15-2 under former coach Travis Green.

“The good thing is over the last six games a lot of these players have played better than they played earlier in the season,” Rutherford said. “We know some of them are capable of doing better and it seemed like they had a good positive thing together and they were having fun playing as a team and liked playing with each other as a group. There was some really good signs there.

“Whenever they tell us to play again we just have to get it going.”