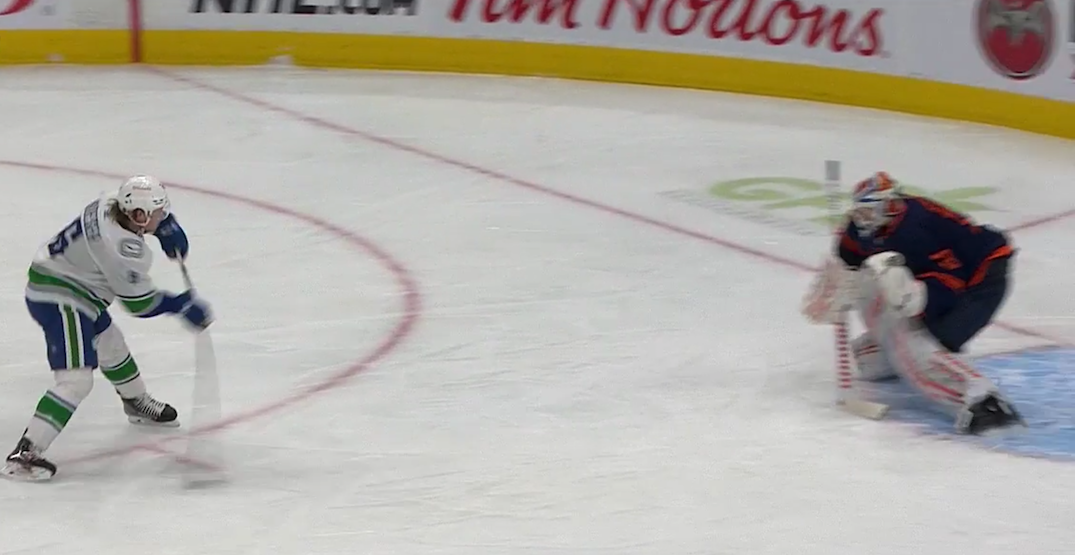 Perhaps no player flew under the radar more in training camp than Brock Boeser.

In fact, on the eve of opening night, Travis Green was asked about the 23-year-old winger, noting how infrequently his name had come up.

“I haven’t been asked a lot of questions about Brock, which maybe is a good thing,” said Green on Tuesday. “He’s just becoming a really good hockey player that is learning how to be a good pro.”

Boeser didn’t fly under any radars in 2017-18. He burst onto the scene during his rookie season, energizing a fanbase at the tail end of one of the darkest eras in team history. He didn’t just score goals, he was a goal-scorer.

Remember when he stared down Carey Price and went top corner, off the bar and in?

How about when he eviscerated Matt Murray twice, leaving the former Pittsburgh Penguins goalie only with lame excuses to explain why Boeser kept beating him?

Boeser was a rock star, with the hair to match, and got the attention at NHL All-Star weekend by winning the accuracy shooting competition on Saturday and taking All-Star MVP honours on Sunday.

Boeser would have eclipsed the 30-goal plateau if not for a serious back injury he suffered against the New York Islanders that cut his season short. Instead, he ended the season with 29 goals in 62 games.

Since then, a lot has happened to take the shine off Boeser’s stardom. Elias Pettersson arrived the next season and was sensational. So was Quinn Hughes, who played his first full season the year after that.

And Boeser, while still a good player, hadn’t been as lethal with his shot since his rookie year, scoring 26 goals in 69 games in 2018-19 and just 16 goals in 57 games last season.

Boeser scored twice in last night’s season opener, a 5-3 win for Vancouver, which is obviously a good sign. But it’s the way he scored them that should be cause for excitement in Canucks Nation — particularly his second goal, which he ripped past Oilers goalie Mikko Koskinen.

Hughes is able to poke the puck to Boeser behind the D and he makes no mistake giving the #Canucks a 4-2 lead! pic.twitter.com/aW86sawzMy

After the game, Boeser admitted that his shot hasn’t been at this level since his rookie season.

That’s great news for the Canucks and a terrifying revelation for NHL goalies. Because Boeser was already becoming a good two-way winger, who had great chemistry with Elias Pettersson and could play against the opposing team’s best players.

“I was pretty excited to come into a new year and now have a fresh start,” said Boeser. “Especially after my back injury… that gave me a lot of problems after. It was pretty bad injury.”

“I’m feeling confident and I feel like my shot’s back where it was in my first year… when I shoot I think it fuels my game and it gives me confidence.”

“But it’s not just the goals, I thought his two-way game was solid tonight. He’s really learned the importance of different areas of the rink and willing to work in those areas as well.”

It was proof that Green’s assessment of him in training camp was correct.

“He looks a little quicker to me,” Green said on Tuesday. “He looks a little more fluid and he’s got a strong understanding of different parts of the game that no one talks about. I can see that and he’s taking pride in that, and that’s the evolution of a young player not just becoming a good player in the league, but becoming a player in the league that understands what it takes to win. He’s really come along nicely in that area, he’s a humble kid, he works hard.