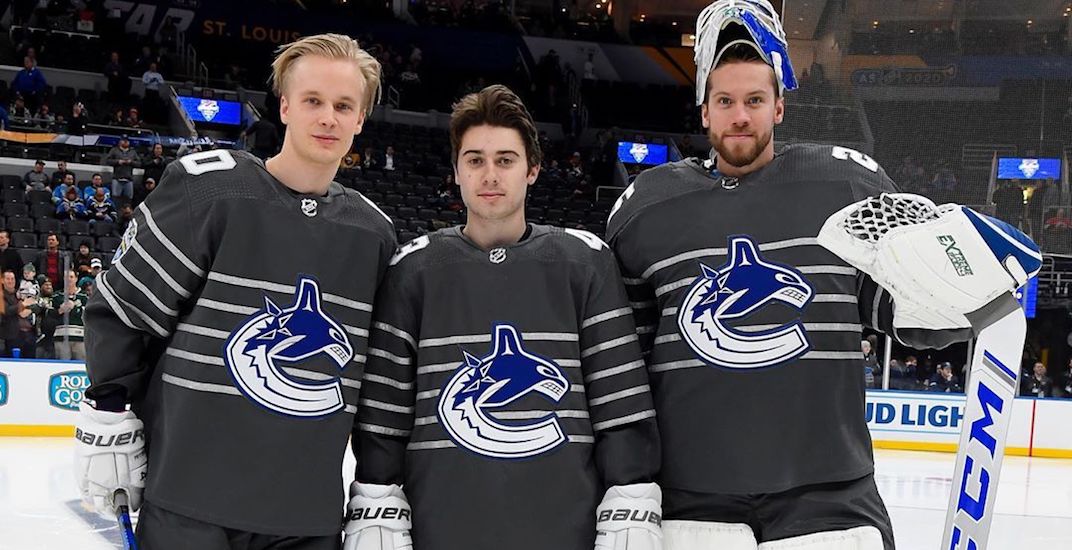 A trio of Vancouver Canucks All-Stars put on quite a show at the NHL All-Star festivities in St. Louis this weekend. Elias Pettersson and Quinn Hughes both showcased their vast array of skills, while goaltender Jacob Markstrom delivered a unique highlight of his own.

As the Canucks get set to return to the ice on Monday night versus the St. Louis Blues, the team held practice at UBC’s Doug Mitchell Thunderbird Sports Centre on Sunday.

After helping the Pacific Division to a 3-on-3 tournament win, which earned them a share of the $1 million prize, all three Canucks All-Stars were full participants at the afternoon practice session.

The Canucks strong play has propelled them to a 27-18-4 record and first place in the Pacific Division. As the unofficial second half of the season begins, continuing with momentum will be key to maintaining top spot in the most competitive division in the league.

“The biggest thing is to win tomorrow,” Markstrom said. “You guys do the math and count how many points we need to the playoffs. We’ve got to focus on St. Louis, a great team. Then we’ve got a super tough road trip. We’re in for a treat here and I think everybody  is up for the challenge.”

Pettersson was a surprise inclusion in the hardest shot competition. The 6-foot 2, 176-pound sniper doesn’t necessarily come to mind when you think of league’s top players who can hammer the puck, but the skinny Swede stepped up and showed that his slap shot is not to be underestimated.

Pettersson finished third in the competition with a 102.4 mph blast.

“It’s a lot of work behind it,” Pettersson explained to Daily Hive after Sunday’s practice. “I’m always trying to get better and stronger.

“It was fun because I think I surprised a lot of people.”

“To be honest… I saw him in the lineup up against those bigger guys. Yeah, he did well.”

Impressing the Great One

Playing in his first All-Star game, Hughes reached into his bag of tricks and delivered the ‘Forsberg’ one-handed deke on Blues goalie Jordan Binnington.

Did he plan it?

“No,” Hughes said. “If you know me, I don’t really plan anything or think about that stuff. I kind of just went out there and saw it was open. I think he slid down and thought I was going go blocker on him.”

Wayne Gretzky mic'd up reacts to the All-Star goal by Quinn Hughes pic.twitter.com/3qX2xUukCx

“Yeah that’s very nice,” Hughes said of the Great One’s comments. “[He was] just joking [more] than anything. It was pretty cool to meet him.”

The uniqueness of an All-Star game brings an opportunity for players to try special tricks. Don’t expect Hughes to bring the Forsberg move to an NHL game.

“I [used to] always do it in practice. I don’t do it here because I don’t want Marky getting mad at me. In college I was messing around, doing whatever.”

Markstrom isn’t surprised by what he sees from the next generation of NHL superstars. Social media plays a big part in the creative genius that we see in young players like Hughes and Pettersson. They have the confidence required to pull off trick moves.

“All these kids, it doesn’t matter if it’s D-Men,” Markstrom began. “They’ve all got Instagram or YouTube. They grew up watching all these skills. It’s so easy to get access to all these trick shots, and what nots. Everybody that’s coming into the league right now has unbelievable skills.”

The Canucks shot-stopper had a rare gaffe in net during the Save Streak competition. While wearing a microphone for the Sportsnet broadcast, Markstrom used some colourful language after Nashville Predators defenceman Roman Josi beat him for a goal.

It was picked up on the live national broadcast for all to hear.

#NHLAllStar #Canucks Markstrom is pissed that Josi broke his save streak pic.twitter.com/NaGwTl2cmX

“No, that’s a Swedish word,” Markstrom joked with reporters.

“It’s an honest mistake. I totally forgot and just blanked out, I didn’t even think about it until after. It’s never good to say a curse word on live TV. You shouldn’t do that so I apologize to those who didn’t think it was funny.”