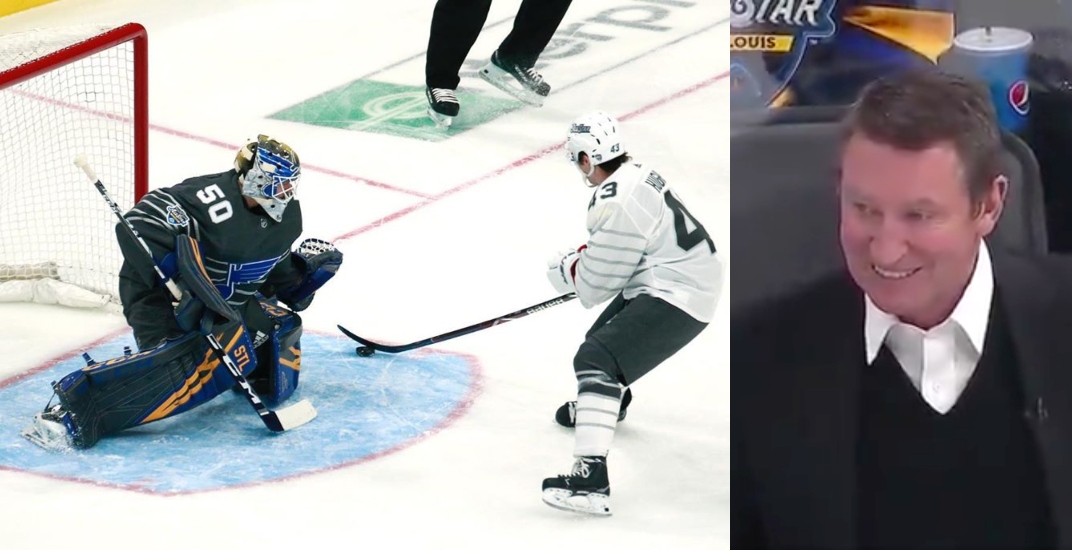 Quinn Hughes has turned many heads during his impressive rookie season with the Vancouver Canucks.

Among them? Wayne Gretzky.

The Great One was the honorary captain on the bench of the Pacific Division team at the NHL All-Star Game on Saturday, which meant he rubbed shoulders with all three Canucks participating in the mid-season event.

Gretzky was mic’d up on the bench, communicating with the Sportsnet broadcast when Hughes scored arguably the nicest goal of the weekend.

Sprung on a breakaway, Hughes busted out the move Peter Forsberg made famous, deking Blues goaltender Jordan Binnington before tucking the puck into the net one-handed.

Wayne Gretzky mic'd up reacts to the All-Star goal by Quinn Hughes pic.twitter.com/3qX2xUukCx

Playing on a line with Calgary Flames winger Matthew Tkachuk and Canucks teammate Elias Pettersson, the trio did a lot of damage.

Nobody had more points (6) on Saturday than Hughes, who collected a goal and five assists in the Pacific Division’s two games en route to the 3-on-3 tournament win. Pettersson, meanwhile, had two goals and one assist, including two goals in the final.

The only question left is what Gretzky would have said if Elias Pettersson successfully completed this move:

Here we have the greatest hockey player ever, and Wayne Gretzky.#Canucks #Pettersson pic.twitter.com/6YHeclkBSU

As winners of the tournament, the 11 Pacific Division All-Stars will split a $1 million prize.

They didn’t get much time in the sun like many of their Canucks teammates did during the All-Star break, but I think Hughes, Pettersson, and Jacob Markstrom will be happy with their weekend in St. Louis.