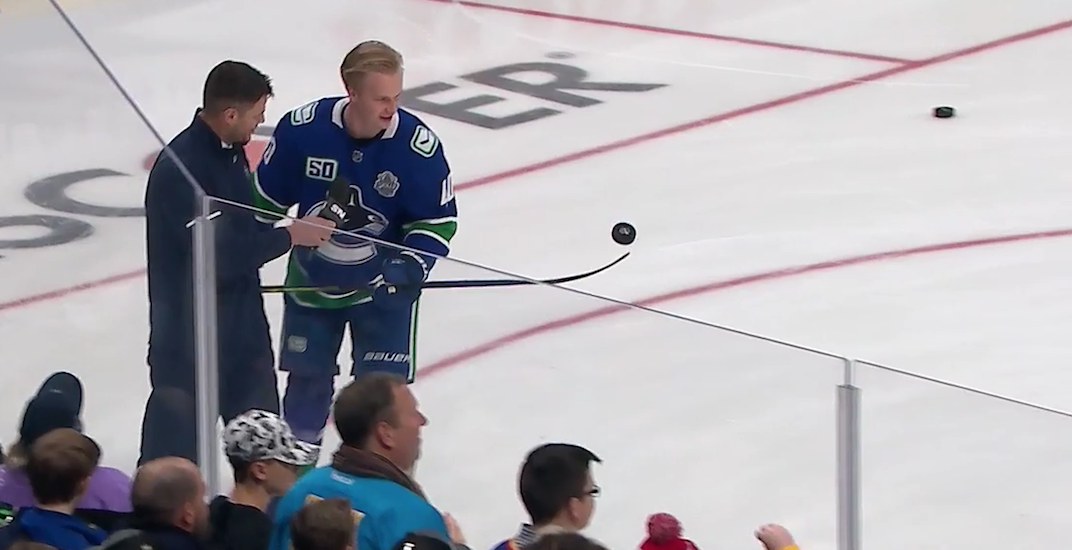 There was a Vancouver flavour to the NHL All-Star Skills Competition in St. Louis on Friday night.

Three Canucks players took part — Elias Pettersson, Quinn Hughes, and Jacob Markstrom — which is more than the team has sent to the mid-season event in eight years.

Vancouver Police Department’s Meghan Agosta also suited up, as one of 20 female players who participated.

Even Canucks public address announcer Al Murdoch was there, calling the action for fans at the NHL event.

But perhaps the most entertaining Vancouver connection was on the Sportsnet broadcast, as former Canucks defenceman Kevin Bieksa helped out at ice level.

“Can you juggle and talk at the same time?” Bieksa asked.

Sportsnet had Markstrom mic’d up during the Save Streak competition. Bieksa told the Canucks goaltender that he’d give him $100 if Markstrom could stop five shootout attempts in a row.

He did, so he cashed in.

Blues goaltender Jordan Binnington won the event with 10 straight saves, but the real winners were Anze Kopitar’s kids, who Markstrom gave the money to.

Mama Markstrom proud of her boy

Markstrom’s mother Lena made the trip to St. Louis, snapping a selfie with her son on the red carpet.

Markstrom was one of the best dressed players at his first All-Star Weekend, rocking this suit:

Marky’s suit is on another level 💯🔥 pic.twitter.com/f1FDcYKAXV

Agosta and Team Canada beat the Americans 2-1 in the three-on-three game. Don’t let the low score fool you though, it was a back-and-forth game with all sorts of breakaways and scoring chances.

Prior to taking the ice, the three-time Olympic gold medallist met the trio of Canucks All-Stars, receiving a team jersey with her name and number on the back.

Thank you @markstrom25 @_quinnhughes @_eliaspettersson for the @canucks jersey. So proud to be representing Vancouver. @vancouverpd

It’s an honour and a privilege to be a part of the @NHL All-Star weekend. I haven’t stopped smiling. It’s Game Day! 3 on 3 🇨🇦 vs 🇺🇸 @vancouverpd @canucks @adidas @pwhpa #ForTheGame

Hughes in the fastest skater competition

Hughes is a great skater, but he’s not the fastest in the league. The rookie defenceman finished in last place in the fastest skater competition.

As the only forward and smallest player in the competition, Pettersson came in third place with a 102.4 mph slap shot.

Shea Weber won the event with a 106.5 mph bomb, finishing ahead of last year’s winner John Carlson, who clocked in at 104.5 mph.

The all-time king of this competition, Al MacInnis, made an appearance as well. The 56-year-old Hall of Famer’s shot (allegedly) hit 100.4 mph with a wooden stick.

The All-Star Game takes place on Saturday night, at 5 pm PT on CBC and Sportsnet.