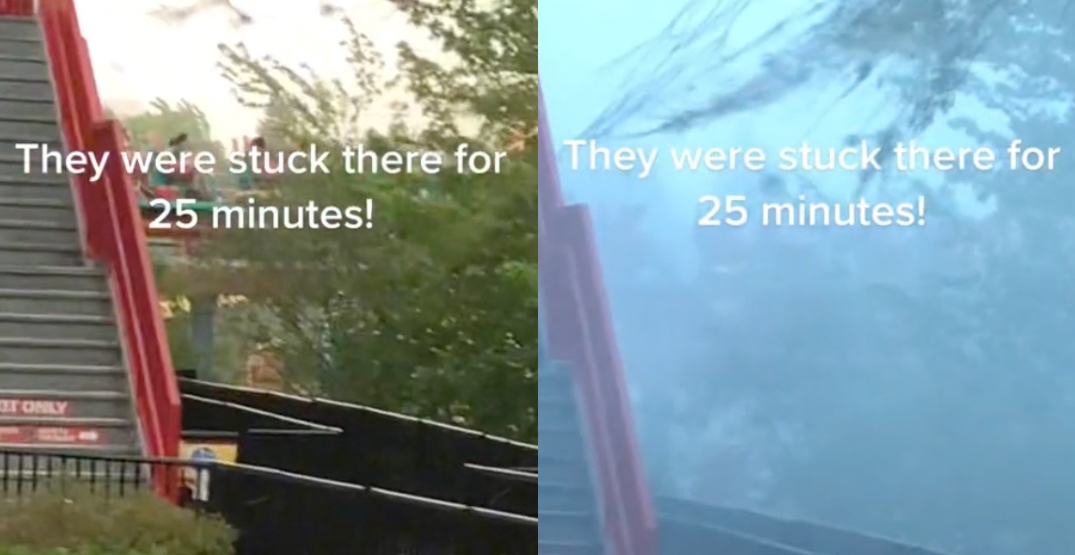 As deadly storms hampered Southern Ontario over the weekend, fun-seekers at Canada’s Wonderland ran for shelter from the skies.

According to a TikTok video, not all riders were able to get out of the harsh weather in time.

On Saturday, May 21, Environment Canada warned of severe thunderstorms with the potential to create toonie-sized hail and wind of up to 130 km/h plus a risk of thunderstorms. The storm even turned deadly as reports of fatalities came in.

In a TikTok posted on Sunday, you can get a glimpse of what it was like on the ground at Canada’s Wonderland during the storm.

TikTok user @chubbychicken84 said that the storm came in quick and in the video, they appear to be outside before going to find cover. Then, from a sheltered place, they show people reportedly stuck on a ride for 25 minutes as the storm wailed around them.

“Oh my god, oh my god, they’re just stuck there!” yells someone in the video.

Canada’s Wonderland provided a statement on the matter, saying that at around 12:40 pm, “ride operations staff began to close rides due to a sudden, severe thunderstorm approaching the park.”

“A power outage occurred shortly after and several rides, including the Behemoth roller coaster, halted with guests onboard.”

“Ride operations and maintenance staff worked to evacuate guests as quickly and safely as possible. Guests on Behemoth were evacuated about 30 minutes later.

Canada’s Wonderland ride evacuation policy is to evacuate guests as quickly and safely as possible, regardless of the weather, and you can read more about ride safety on their website.

“Most rides are built with a computerized control system that monitors the state of the ride such as speed conditions, positions of brakes, pneumatic and/or hydraulic pressures, passenger restraints and other systems related to the safe operation of the ride,” the website reads.

These control systems will stop the ride safely if it detects any issues. According to the website, it usually takes just a few minutes to bring riders to the ground and get the ride operational again.

“This is not a malfunction, but rather a safety feature of every ride,” the website said.