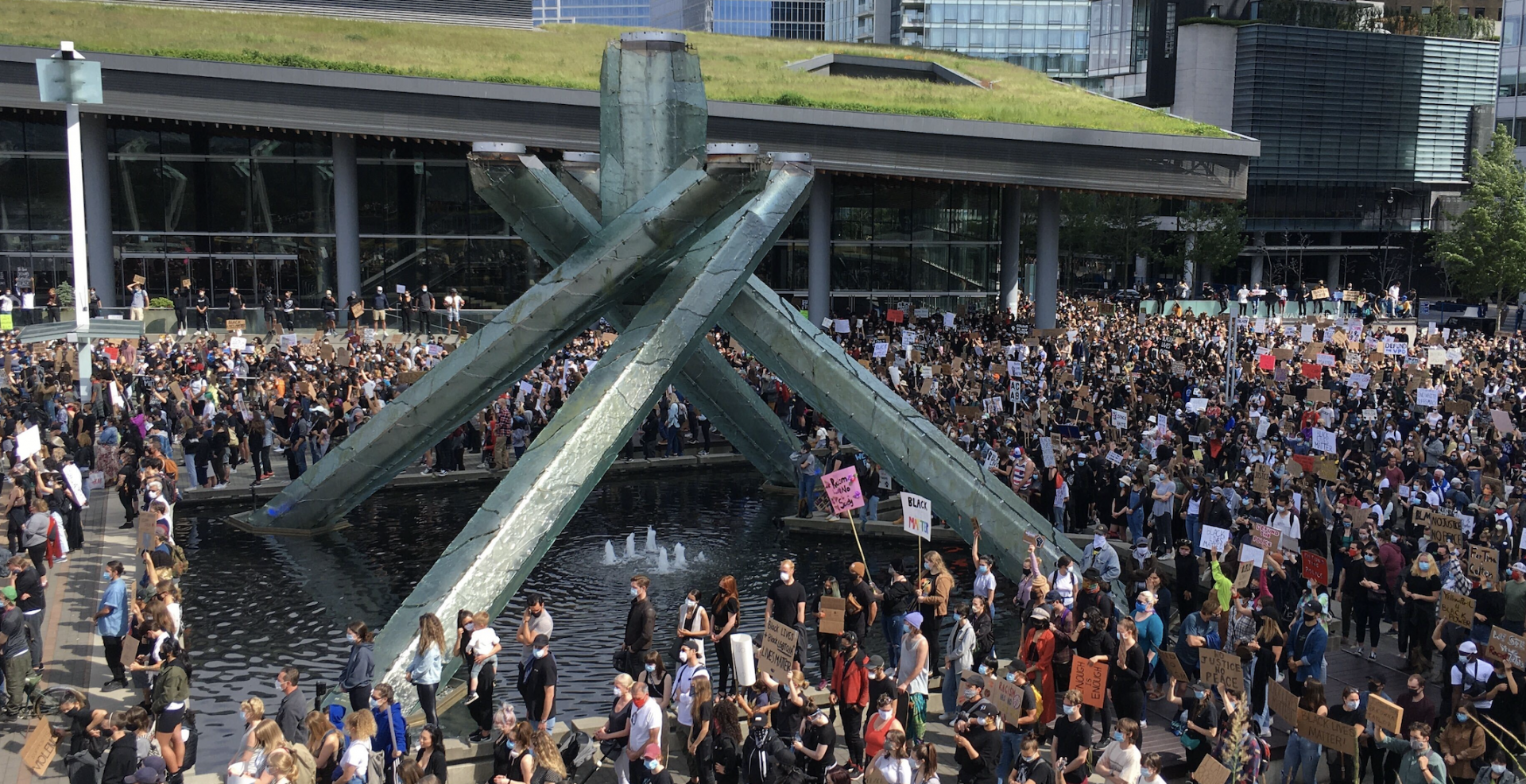 Organized by Jacob Callender-Prasad with Vancouver’s Black Lives Matter chapter standing in solidarity, the demonstration took place at the Olympic Cauldron downtown, and stayed there after organizers decided to scratch a planned march to minimize risk of arrests and potential property damage.

The crowd reached over 1,000 people just after 4 pm on Friday.

Many demonstrators wore cloth masks to prevent coronavirus transmission, and BC’s top doctor has asked those attending to closely watch for symptoms after the rally.

I’m here at the anti-Black racism/George Floyd memorial for @DailyHiveVan. We’re starting with poetry and saying the names of victims of police violence pic.twitter.com/VIC0iVzrlA

Looks to me like there’s more than 1,000 people here pic.twitter.com/tQMFgbHs8c

The continuing demonstrations across the continent started after video emerged of former Minneapolis police officer Derek Chauvin kneeling on Floyd’s neck for several minutes as Floyd cried out that he couldn’t breathe. Nearly two weeks after Floyd’s death on May 25, demonstrations are still going on in many North American cities.

Black Lives Matter demonstrators around the US and Canada have expanded their calls to include defunding police forces and justice for other Black individuals killed by police, including Louisville, Kentucky’s Breonna Taylor. Officers shot the 26-year-old healthcare professional while raiding her home as part of a drug investigation involving a different residence.

Canadian activists also want justice served in the deaths of Toronto’s Regis Korchinski-Paquet, who died falling from her balcony while police responded to her apartment, and BC’s Chantel Moore, who was shot by police who were doing a wellness check at her New Brunswick apartment.

Several demonstrations in US cities and one in Montreal have turned dangerous after police used violent tactics to contain protesters. Some people have also looted stores while the protests were going on, leading several downtown businesses in Vancouver to board up their windows as a precaution.

But Friday’s demonstration in Vancouver stayed peaceful while speakers and attendees called for change.

Speaker asks crowd to raise their fists, and then “use that fist to make the world fair” pic.twitter.com/hbxlheLtKW