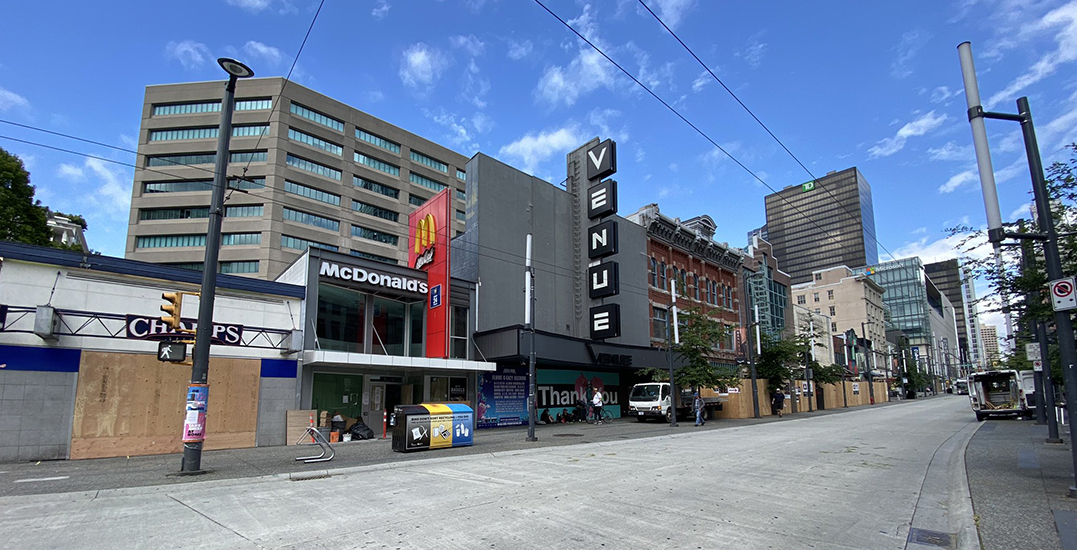 Retailers in Downtown Vancouver are boarding up storefronts. (Farhan Mohamed/Twitter)

Some retailers across Downtown Vancouver are boarding up their storefronts ahead of Friday’s anti-racism protests.

The demonstration follows last Sunday’s massive event at the Vancouver Art Gallery, demanding justice for George Floyd. Friday’s protest is being held at Canada Place and will begin at 4 pm PST in front of the Olympic Cauldron.

While last Sunday’s protest in Vancouver remained peaceful, similar events around the world turned violent after escalating tensions between police and protesters.

Photos have since surfaced on social media, showing the exteriors of retail stores being covered in plywood as a precaution over any possible riots and looting.

Stores along Robson and Alberni are boarding up again. This time they are afraid of a riots. #Vancouver pic.twitter.com/ZNNY8wCIWU

It looks like they’re boarding up the big box stores in downtown #Vancouver in anticipation of something happening down here. pic.twitter.com/uvi2hqCCEF

#Vancouver is boarding up again. pic.twitter.com/t7mGDue1ag

Another store in downtown Vancouver that opened up but have closed again, and are boarding up again. pic.twitter.com/d1qu0OsjUa

Yet another store in downtown Vancouver that opened up, but is in the middle of boarding up again, and possibly closing again. pic.twitter.com/uSeeZe5O0s

Having only taken down this 10-12 feet of plywood just last week, it’s going up again. Looks like @Nordstrom Vancouver isn’t taking any chances. 6 security guards standing near the entrances too. pic.twitter.com/K0PWp5LI35

Nordstrom’s Pacific Centre location was one of the first major retailers to announce a temporary closure.

“To help keep our employees and customers safe, we are adjusting hours and temporarily closing stores in some locations,” the company said in a statement. “Out of an abundance of caution, some of our storefronts are being boarded.”

Jacob Callender-Prasad, one of the organizers of Friday’s protest, has also addressed concerns over riots and looting, stressing that the event “needs to stay peaceful.”

The organizer adds that “nobody wants to see the community we work in get destroyed” and that “if you are going to start a riot, you are not wanted.”

“If this gets violent, we diminish everything we’ve worked for.”