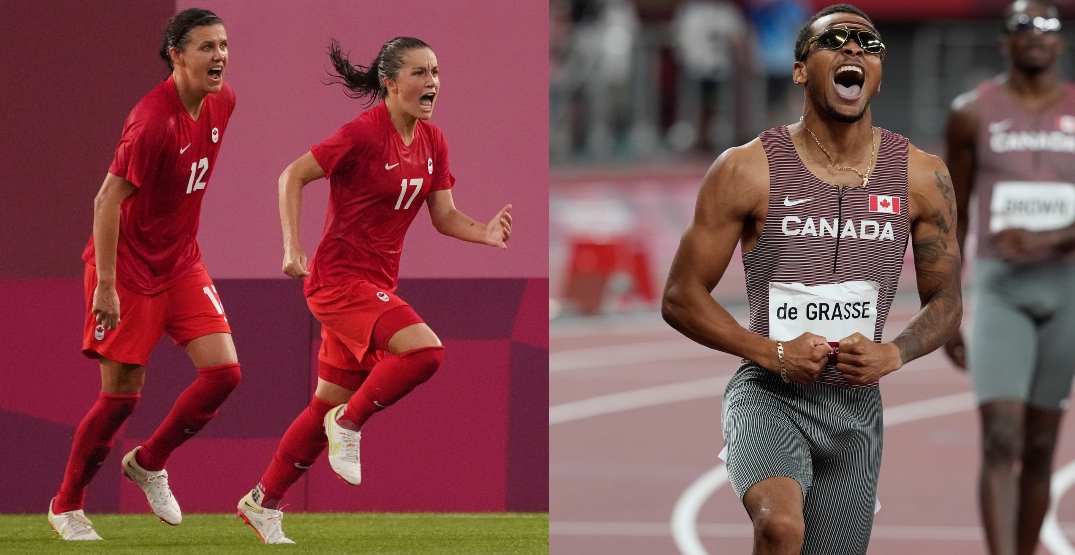 Friday morning is going to be a busy one for Canadian medal hopefuls at the Tokyo Olympics.

Canada’s women’s soccer team will compete in the gold medal match against Sweden at 8 am ET/5 am PT, after organizers moved the start time to avoid extreme midday heat.

Before that game wraps up at Yokohama Stadium, the Canadian 4×100-metre relay team will be hitting the track at Olympic Stadium in Tokyo, beginning at 9:50 am ET/6:50 am PT.

Andre De Grasse, Aaron Brown, Jerome Blake, and Brendon Rodney tied with China for the second-fastest time, trailing only Jamaica. De Grasse, Brown, and Rodney were part of the bronze medal winning team in the same event at Rio 2016.

De Grasse is searching for his third medal in Tokyo, and the sixth of his illustrious Olympic career.

Whether it’s gold or silver, Canada will become the only country to win a medal in women’s soccer in each of the last three Summer Olympics, having won bronze in 2016 and 2012. Sweden won silver at Rio 2016.

This could be the last Olympic Games for 38-year-old living legend Christine Sinclair. Canada’s captain and the all-time international goals record holder has just one goal in this tournament, but could play a factor in the gold medal match.

“Our goal heading here was to change the colour of the medal after back-to-back bronze medals,” Sinclair said after Canada defeated the United States in the semi-final. “What a performance, what a fight. I’m just so proud of our team, and one more to go.”

“This is a very unique and special group, one I’m very proud to be part of. We fight for everything. Job one is done for us, changing the colour of the medal, but now that we’re in the final, we go for it. This tournament is gruelling; that’s why I’m proud that we have 22 strong players that can step on the field and make a difference and they have this tournament.”

As if those two marquee events weren’t enough, Canada has two medal hopefuls in the men’s 5,000-metre final, which begins at 8 am PT/5 am PT — the same time as kickoff in the soccer match.

Canadian distance runners Mohammed Ahmed and Justyn Knight finished second and third in their respective heats to get to the final. Ahmed finished sixth in the 10,000-metre race last week, and narrowly missed the podium with a fourth-place finish at Rio 2016.

Gabriela Debues-Stafford is Canada’s lone medal hopeful in the women’s 1,500-metre final, which begins at 8:50 am ET/5:50 am PT. She finished third in her semi-final heat yesterday.