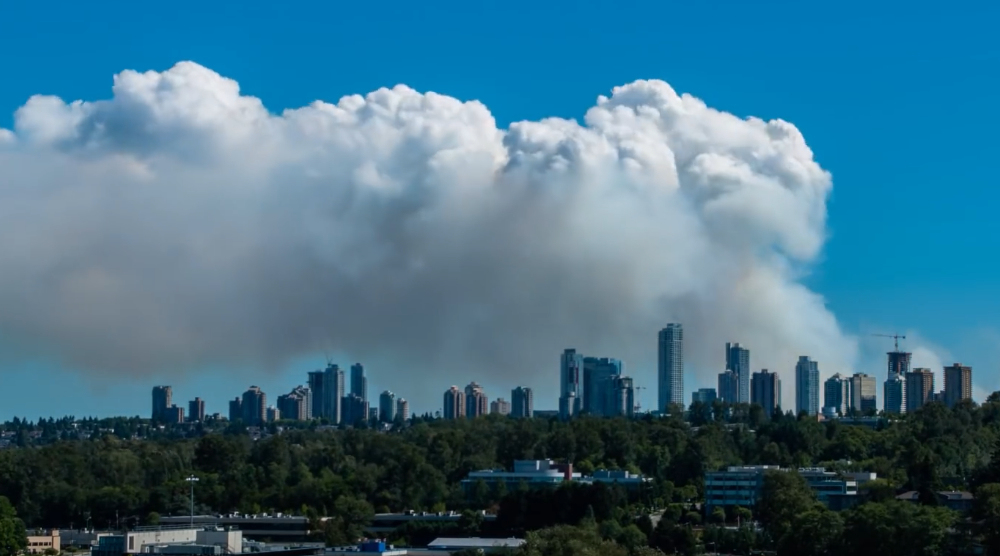 Smoke from the Burns Bog fire in Delta was seen across the region on Sunday and it continues to billow over the skies today.

A time lapse video filmed from a distance away, uploaded to YouTube earlier today, shows a large column of smoke quickly rising high into the sky from behind the Metrotown skyline.

According to Delta Police, the fire was first reported Sunday morning as a relatively small 100 metre by 100 metre blaze, but high winds caused the flames to quickly spread over a large area by late afternoon. The severity of the situation, which threatened a number of neighbouring businesses, prompted Delta to declare a state of provincial emergency.

As of this morning, the fire was estimated to be between 123 acres to 173 acres – roughly the same size of Queen Elizabeth Park for the low estimate and Hastings Park for the high estimate.

The fire was 10% contained this morning and crews hope to have it completely contained by the end of the day. A total of 80 firefighters are battling the blaze today, but unlike yesterday no planes will be used to drop water and fire retardant.

The air quality over the region has greatly improved overnight and the winds have died down considerably.