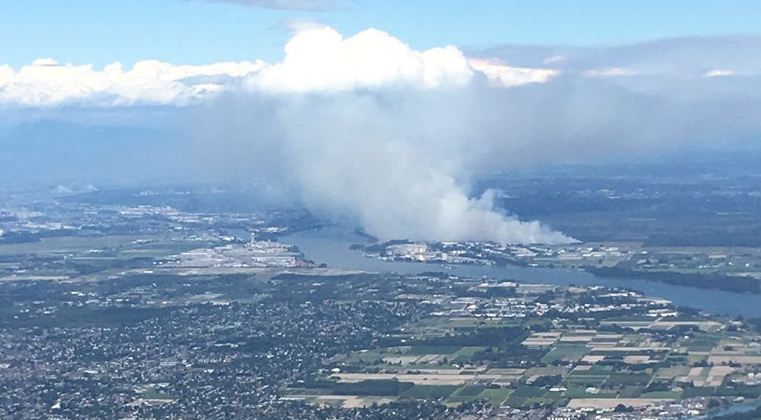 The massive fire in Delta’s Burns Bog that ignited Sunday afternoon is far from over, and officials are now estimating it has grown up to 70 hectares in size, up from the 50 which was reported just after 5 pm.

Fire crews have been hard at work battling the blaze, with around 100 firefighters from Delta Fire, BC Wildfire Services, and around Metro Vancouver all working together on the ground as well as with helicopters and air tankers.

Delta Fire currently has teams on fire-watch in the industrial area in order to ensure the safety of businesses and protect local infrastructure.

The Fraser River will reopen to marine traffic tonight, starting at 10 pm.

Tilbury Industrial Park is still under evacuation, and officials are asking the public to remain out of the area between 76 Street to Webster Road and Progress Way to River Road.

Officials are also predicting that it will be at least one week before the fire is fully extinguished. The bog’s peat moss makes it difficult to put out quickly as it can burn for a long period of time. In 2005, the bog caught fire, burning 200 hectares and took over one week to extinguish.