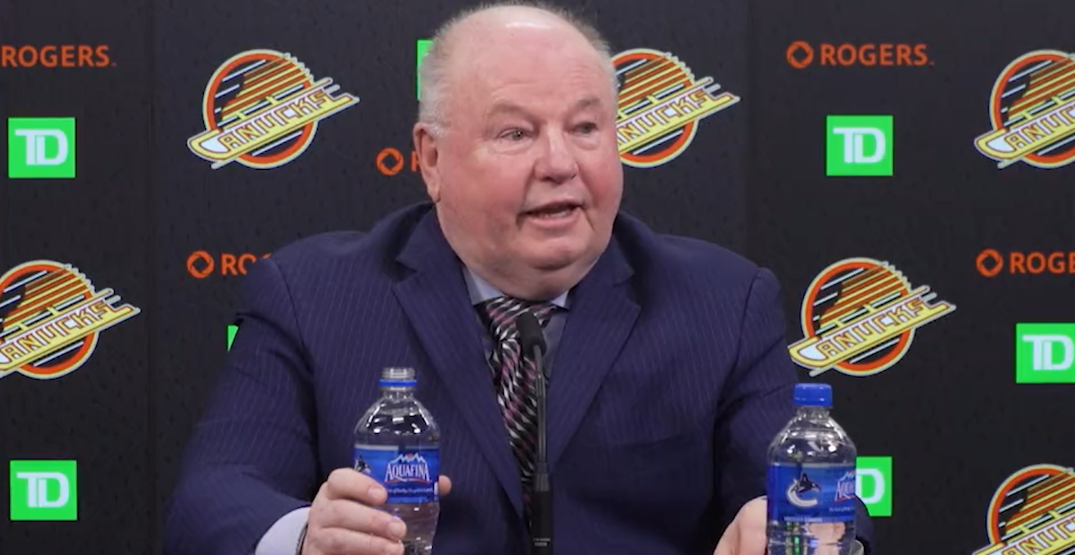 Never before in the 52-year history of the Vancouver Canucks has the city embraced a new head coach like they have Bruce Boudreau.

It started right away, with a big 4-0 win on December 6 in Boudreau’s debut. Late in the third period, a chant started from a fan standing in the Larscheiders section.

The chant quickly spread throughout Rogers Arena and it’s been heard countless times at Canucks home games, and even some road games, ever since.

On multiple occasions in December, Boudreau said that he didn’t want fans chanting “Bruce there it is.”

“I wish they’d stop singing that stupid song, though, in the stands,” Boudreau said a week after he was hired.

And that’s a good thing, because on Thursday night, after the final Canucks home game of the season, Boudreau admitted that he’s felt the love from fans in Vancouver. And while the “Bruce there it is” chant might still be a little embarrassing for him, he’s appreciative of the fans.

“I’m 67 years old and never experienced anything like this before,” Boudreau told reporters. “Never expected it when I first got the job. The people in Vancouver have been amazing. Amazing.

There was some doubt if Boudreau would return to the Canucks next season, but recent reports have indicated that it’s now likely.

The Canucks will hold their final player availabilities Sunday after they have their exit meetings. Good chance Bruce Boudreau has himself an extension before he and management speak to the media in the days following.

Irfaan Gaffar of The Fourth Period is reporting today that there’s a “good chance” that Boudreau will have a contract extension signed by next week.

And wouldn’t that be music to Canucks fans’ ears?