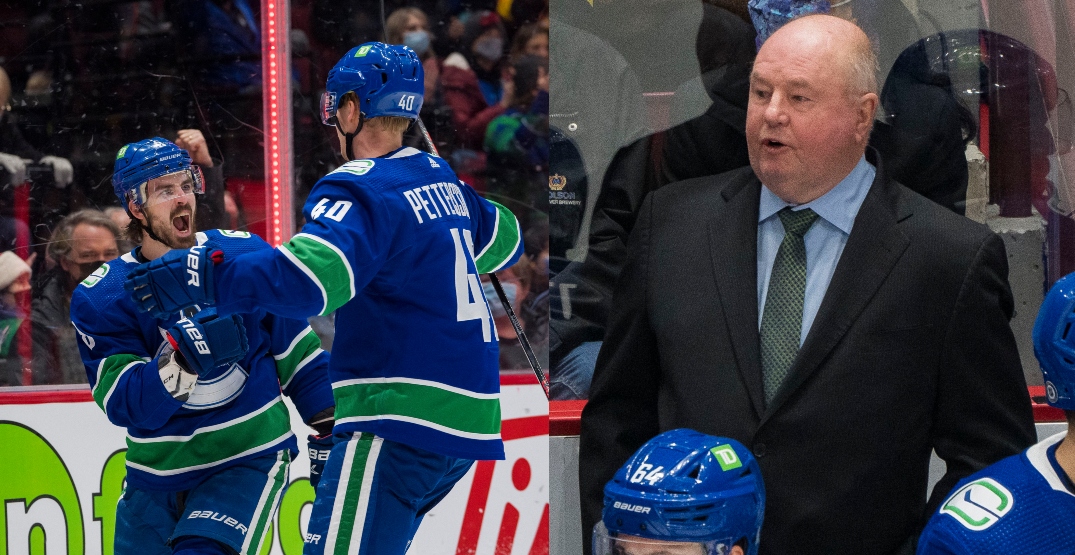 What a difference a new coach makes.

Two nights ago, the Vancouver Canucks were at their lowest. Losing 4-1 at home, fans were booing, chanting for Jim Benning to be fired, and a jersey was thrown onto the ice.

They’ve still got a long way to go, but at least there’s hope now. The Canucks are 1-0 under new head coach Bruce Boudreau, winning 4-0 against the Los Angeles Kings on Monday night.

The Canucks played more aggressive like Boudreau wanted, and tried out new players on the penalty kill. For one game at least, it worked.

Vancouver killed off both Kings power plays, with players like Bo Horvat and Elias Pettersson seeing time on the penalty kill. It’s a small step, but it feels big for this team, which carried a historically-bad PK percentage into the game.

Other positive signs included Brock Boeser scoring his first goal in 14 games, Elias Pettersson earning just his fourth even-strength point of the season, and Thatcher Demko getting his first shutout.

And then there was the love for Boudreau.

“Bruce there it is,” could be heard on the television broadcast, as a chant started by the Larscheiders in section 325 and 326 spread throughout Rogers Arena. Even new Canucks DJ Tom Fleming got into the action, playing “Whoop there it is” to help fans sing along.

“I didn’t hear it, but it would be nice,” Boudreau said when asked about the chant. “That’s great stuff. Anything positive.”

“BRUCE! There it is!”
The new battle cry of #Canucks fans at Rogers Arena pic.twitter.com/f1jJgZNzdK

BRUCE THERE IT IS pic.twitter.com/xBW7tXBYED

A “BRUCE, THERE IT IS!” chant fills the arena!

Safe to say, Canucks fans like what they are seeing from this Bruce Boudreau coached team.

Shouts to the @Larscheiders vibing out tonight at the Canucks game

Rogers Arena, led by the @Larscheiders, is chanting "Bruce, there it is" pic.twitter.com/dzo8wftSV1

ThE fAnS iN tHiS mArKeT aRe So NeGaTiVe!!!

“Bruce there it is!” #Canucks pic.twitter.com/2keOuRTNHS

from throwing jerseys on the ice to chanting “bruce, there it is!” all in a span of 48 hours pic.twitter.com/nyQo7sALjD