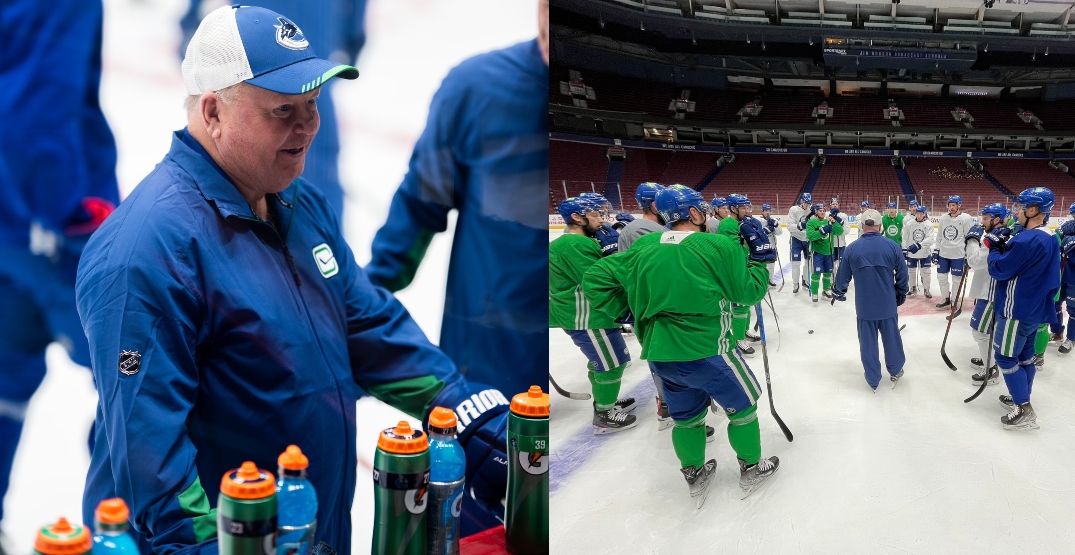 The Bruce Boudreau era has begun.

The 20th head coach in Vancouver Canucks history led his new team on the ice at Rogers Arena this morning.

Taking over from Travis Green, who was fired by the team yesterday, Boudreau doesn’t have much time to implement changes. The Canucks host the Los Angeles Kings tonight, in the second game of a six-game homestand.

While he has undoubtedly arrived with fresh ideas, just getting a new voice in the room should be welcomed with open arms from players. It has been a miserable season for everyone involved as Vancouver currently has the fourth-worst record (8-15-2) in the NHL by points percentage.

“Bruce has a lot of positive energy,” Bo Horvat said after practice. “He wants to get the best out of his players. He has a few new ideas and ways that he thinks we can improve as a team. I’m excited to get that going here tonight.”

Specifics on Boudreau’s ideas will have to wait until later this afternoon when the Toronto native meets with the Vancouver media for the first time. But he is expected to implement a more up-tempo style of play.

He also chose to shake up the lines, tweaking all four trios and tinkering with two defence pairings, as shown below by Brendan Batchelor of Sportsnet.

The 66-year-old bench boss also chose to tweak both power play units, as illustrated by Thomas Drance of The Athletic.

While the Canucks roster clearly has flaws, the immediate hope is that Boudreau can jumpstart the team’s struggling offensive stars. Elias Pettersson was demoted to the third line under Green and hasn’t looked comfortable all season long, with just 12 points in 25 games. Horvat (13 points in 25 games) and Brock Boeser (10 points in 22 games) have also had subpar years.

Special teams will surely be a focus. The Canucks’ power play is ranked 22nd in the league at 17.4%, and their penalty kill is even worse.

Sitting at just 64.6%, the Canucks’ penalty kill is the worst in NHL history after 25 games.

Canucks 64.6% penalty kill is the worst in NHL history through 25 games of a season

Boudreau ranks 22nd all-time in NHL coaching victories, finding success with the Washington Capitals, Anaheim Ducks, and Minnesota Wild. His teams have made the playoffs in 10 of 13 seasons, though Boudreau has had limited playoff success, making it past the first round four times and reaching the Conference Final just once.