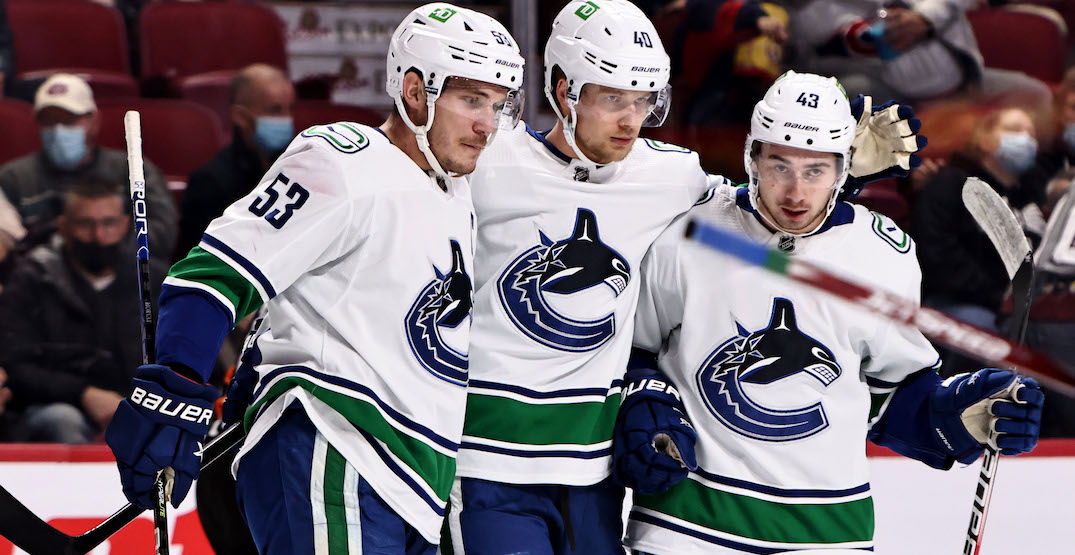 Nobody could have seen this coming.

Judging from the lines used at today’s practice, it looks like Elias Pettersson will once again start on the Vancouver Canucks’ third line.

It’s not even a really hot-button issue among fans and media right now either, and that really tells you everything you need to know about how Pettersson’s season has gone, and how the Canucks season has gone, for that matter.

Pettersson played 13:31 in Wednesday’s win in Ottawa, playing the seventh-most even-strength minutes among Canucks forwards. It followed 13:13 of ice time in Montreal on Monday and 13:05 on Sunday in Boston.

He played 12:48 against in Pittsburgh earlier on the road trip.

Outside of the first few games of his rookie season and games cut short by injury, these rank as the lowest time-on-ice totals of Pettersson’s career.

During Friday’s practice, Pettersson lined up with Justin Dowling and Nils Höglander, which likely means he’s headed for another low ice time night at Rogers Arena on Saturday against the Penguins.

The top two lines are projected to be Bo Horvat with Tanner Pearson and Conor Garland, and J.T. Miller with Vasily Podkolzin and Brock Boeser.

“We’ll take it game by game. I liked our game last game, we won 6-2. I’m not overthinking it,” head coach Travis Green said after practice. “I thought he’s taken a step the last couple games. We’ve been doing a little work with him on the ice and off the ice. As far as what we’re going to do with his line, that’s all about what’s best for the team.”

Green has J.T. Miller playing in the middle in part because of Pettersson’s struggles, but also because his options up the middle are slim. Jason Dickinson has been a disappointment during his first season in Vancouver, while Juho Lammikko has struggled also. But Pettersson hasn’t been anywhere close to his best either.

“This is about what’s best for our hockey team,” Green added. “I’ve had a lot of conversations about Petey from the start of the year, him and I have talked quite regularly about his game, certain things that we think will help his game.”

The good news is Pettersson has points in consecutive games. Both were tallied on the power play, including a patented one-timer slap shot goal against the Canadiens.

Pettersson still plays a lot on the power play, and perhaps success there will give him a much-needed boost in confidence.

“It’s easy to say ‘stay confident, be confident,'” Green said in response to a question that wasn’t specifically about Pettersson. “I think at the end of the day when you’re really working and skating and competing on a puck, sometimes confidence will just come from that. Sometimes you’ll get an ugly goal and all of a sudden you’ll feel good about yourself.”

“It’s not as simple as saying ‘hey work hard, you’re going to get confidence’ either. Confidence can come from different things. It doesn’t just happen cause you want it to happen.”

For now, Green appears content to wait for Pettersson to prove he deserves more minutes, rather than forcing the issue. It’s not a strategy every coach would employ, and one that Green clearly avoided until recently.

It’s a lot easier to do on a team that’s winning. The Canucks have done that in the past two games against easy opponents, but they have played better of late.

Ultimately, it’s going to be tough for the Canucks to win games with the guy that’s supposed to be their best player playing on their third line. For the sake of the Canucks, hopefully Pettersson proves he deserves a bigger role on this six-game homestand.