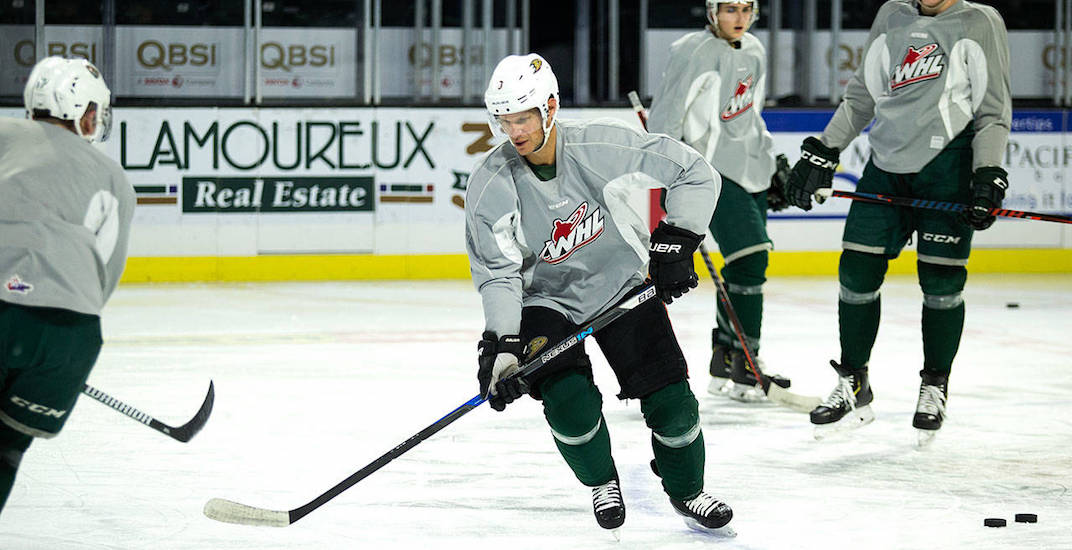 The NHL season is more than two months old and Kevin Bieksa is still without a team.

Retirement can’t be far away for the 37-year-old defenceman, but he’s not ready to hang up the skates just yet.

The former Canucks blueliner is back in the Pacific Northwest, training with the WHL’s Everett Silvertips, as he prepares to represent Canada at the Spengler Cup in Switzerland later this month.

Not just your ordinary "helping hand."

Thanks for hanging out with us, Kevin Bieksa!

“Obviously it works both ways,” Bieksa told The Herald newspaper’s Joshua Horton. “I’m here to get back into skating shape and game shape and practice with the team… but also I’m here to help these guys out.”

Bieksa had been in talks with at least one NHL team this summer, but didn’t want to move too far away from his family’s home in California. After 10 years with the Canucks, Bieksa played the past three seasons with the Anaheim Ducks.

“Being away from my children at this time in their lives is not something I’m interested in,” said Bieksa, who has an 11-year-old son and nine-year-old daughter, in an interview with Sportsnet’s Elliotte Friedman last September.

Bieksa also told Friedman that he was still training as if he was going to play this season, before dropping the quote of the year.

Bieksa, who captained Canada at the 2014 IIHF World Championships, would be a natural choice to wear the C at the Spengler Cup. The rest of the team has not yet been named, though the roster is usually made up of Canadians playing in pro leagues in Europe. Last year’s team included a few of Bieksa’s former Canucks teammates, including Mason Raymond, Max Lapierre, and Andrew Ebbett.

If Bieksa impresses in the overseas tournament, there’s a chance he could earn what would likely be his last NHL contract.